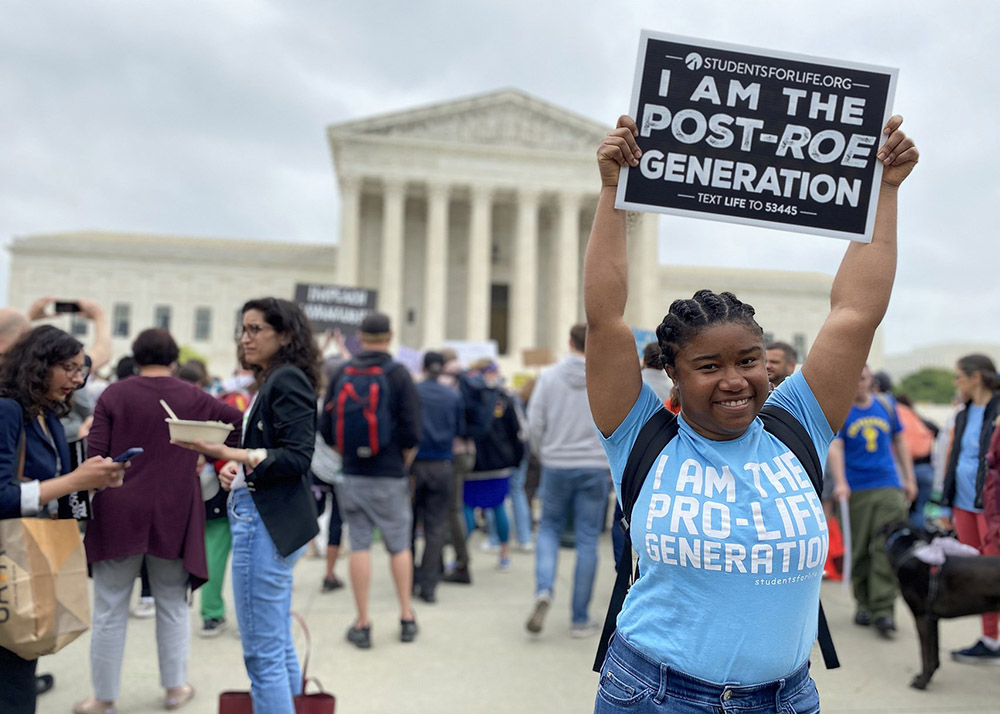 Norvilia Etienne, of Students for Life, holds a sign outside the Supreme Court of the United States May 3, the day after a draft of the court's opinion was leaked signaling that the court was leaning toward overturning Roe v. Wade. (CNS/Rhina Guidos)

The U.S. Supreme Court has not yet overruled Roe v. Wade, but that did not stop some Catholic bishops, priests, activists and others from reacting with hope to a leaked draft decision that indicates the high court is poised to scrap the constitutional right to an abortion.

A few church leaders and pundits expressed disapproval that someone leaked the draft to Politico, which published the text of Justice Samuel Alito's preliminary ruling on May 2. But they also praised the 98-page draft for its legal conclusion that the court erred in Roe and that the landmark 1973 decision "must be overruled," along with the 1992 ruling in Planned Parenthood v. Casey that affirmed Roe.

"Roe was egregiously wrong from the start," Alito writes in his draft, which was circulated to other justices in February. "It is time to heed the Constitution and return the issue of abortion to the people's elected representatives."

The high court is expected to issue its official ruling later this summer in Dobbs v. Jackson Women's Health Organization, which pertains to a Mississippi law that bans most abortions after 15 weeks of pregnancy. Attorneys who argued for the law asked the court to overturn its precedents in Roe and Casey. Alito's draft indicates the court's conservative wing may have the votes to do so.

Strickland, a conservative prelate who is an outspoken opponent of legal abortion, called on his followers to pray that "hearts are changed and the sanctity of the life of the unborn once again is recognized in our nation."

"Thanks be to God for the Supreme Court decision regarding Roe vs Wade," Strickland said.

As news of the leaked draft spread online, San Francisco Archbishop Salvatore Cordileone, another outspoken conservative prelate, on May 2 tweeted a photo showing thousands of anti-abortion protestors in Washington D.C.

"Tonight I am thinking of all the years of hard work by pro-life people of all faiths and none. Years and years of patient advocacy, help for unwed moms, political engagement and more," Cordileone wrote.

The Texas Catholic Conference tweeted on May 2 that it was rejoicing that Texans appeared to be "on the precipice" of ending legal abortion in their state, which has a so-called "trigger ban" that outlaws abortion if Roe is overturned.

Meanwhile, Bishop Michael Olson of Fort Worth, Texas, tweeted that the leak was "an attempt at intimidation," a view echoed by outspoken anti-abortion activists such as Abby Johnson, the former Planned Parenthood official and high-profile controversial Catholic convert.

"No doubt this was released by a pro-abortion staffer trying to cause upheaval in the court," said Johnson, who also tweeted for people to pray for "spines of steel and protection for the justices who voted to overturn Roe."

But not all Catholic responses to the leaked draft struck triumphant notes. Emily Reimer-Barry, a Christian ethics professor at the University of San Diego, told NCR that she has real concerns that such a ruling could place additional healthcare barriers for women faced with serious complications during pregnancy, including miscarriage.

"We need to do much more to accompany women and to approach this from a lens of mercy and compassion, which I haven't seen much of in terms in the Catholic approach to abortion," Reimer-Barry said.

In a prepared statement, Chief Justice John Roberts on May 3 confirmed the draft opinion's authenticity, though he added that the draft "does not represent a decision" by the court "or the final position" of any of the nine justices. Roberts said he had ordered the high court's marshal to investigate the leak.

President Joe Biden, a Catholic Democrat who supports abortion rights, told reporters on May 3 that the draft opinion represented a "radical" decision that would represent "a fundamental shift in American jurisprudence" and undermine the court's other precedents that are based on the right to privacy, including same-sex marriage.

"I think the codification of Roe makes a lot of sense," said Biden, who in a separate prepared statement added that it would fall "on our nation's elected officials at all levels of government to protect a woman's right to choose."

House Speaker Nancy Pelosi, another Catholic Democrat who supports abortion rights, and Senate Majority Chuck Schumer both condemned the leaked draft. The House has passed a bill to codify Roe into federal law. Schumer said the Senate will also vote on a bill to codify Roe, but the Democrats do not have the 60 votes needed to break a Republican filibuster.

In an email blast on May 3, Brian Burch of CatholicVote.org, a right-wing political nonprofit, meanwhile said his team is "working with allies and pro-life organizations to respond to the coming media barrage."

"This is the moment we've been waiting for," Burch wrote. "The pro-life movement has prayed and worked for decades for this. And what happens next may be more important than any other event in the past four decades." 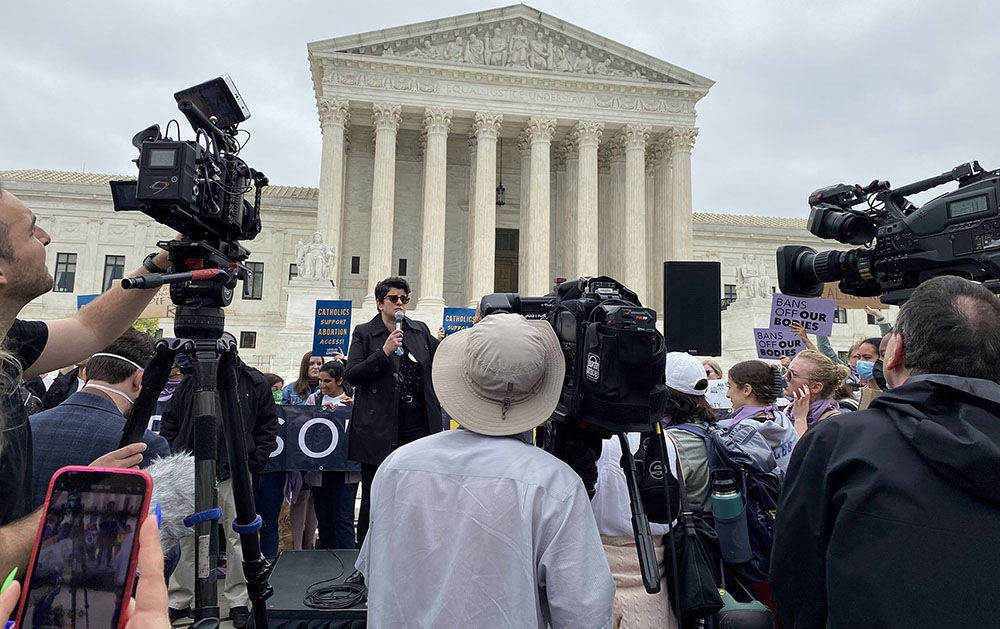 Jamie Manson of Catholics for Choice speaks to a crowd outside the Supreme Court of the United States May 3, the day after a draft opinion was leaked signaling that the majority of justices were leaning toward overturning Roe v. Wade. (CNS/Rhina Guidos)

Not all Catholics will be lining up with organizations like CatholicVote.org. On May 3, activists with Catholics for Choice, a nonprofit that supports legal abortion, demonstrated outside the Supreme Court. Jamie Manson, the group's president, referenced a 2020 Pew survey in saying that she was one of "68% of Catholics who do not want Roe v. Wade struck down."

"The time is now for the silent majority of pro-choice Catholics and former Catholics to be outspoken and emboldened in their support for abortion access for those who choose it," Manson said in prepared remarks.

Meanwhile, Reimer-Barry also told NCR that much of the country's debate around abortion rights, including in Catholic contexts, have tended to ignore or downplay women's rights to autonomy, as well as the impacts of structural racism and socioeconomic factors that are often at play when women face difficult decisions pertaining to keeping a pregnancy. She said portions of Alito's draft seemed "totally out of touch with the realities of legal landscape and the everyday challenges that pregnant and working moms face right now."

Said Reimer-Barry, "We should think about this through a framework that offers supports for women, and those supports should come before the sacrifices. But we don't see those supports right now; those supports are not already in place even though the pro-life movement has had over 50 years to establish those supports. The GOP that [pro-life leaders] aligned themselves with has not been a good partner to build the social supports to establish the culture of life that John Paul II talked about."

A version of this story appeared in the May 13-26, 2022 print issue under the headline: Most anti-abortion Catholics hopeful after leaked draft; others concerned.