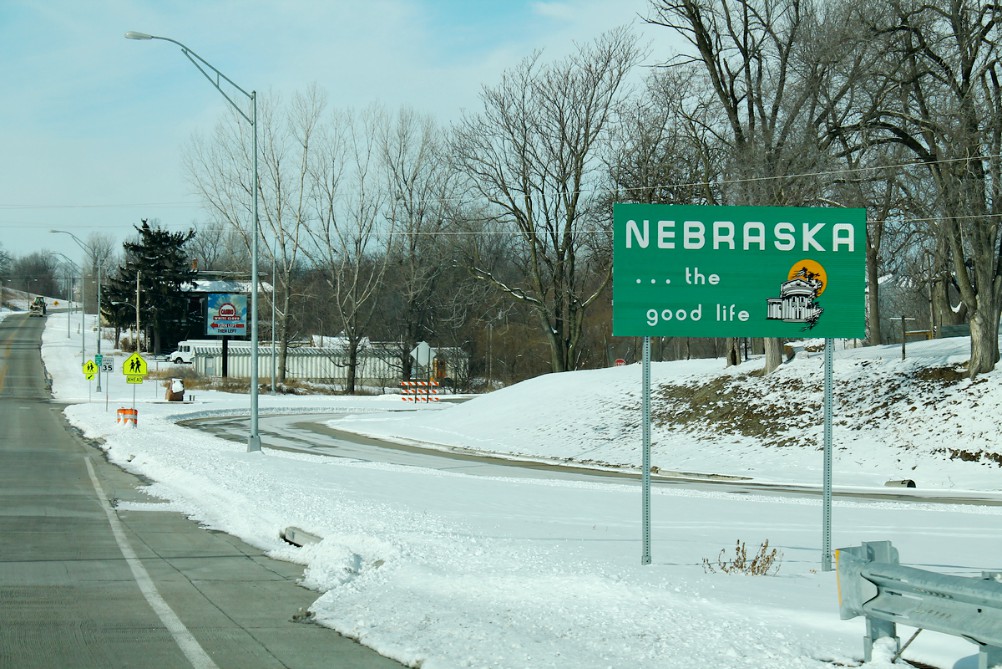 A welcome sign is seen on a highway entering the state of Nebraska. (Wikimedia Commons/formulaone)

Nebraska may be less diverse than the United States as a whole, but it doesn't mean the residents live in a bubble, according to Natalie Jackson, research director for PRRI, a nonprofit and nonpartisan research organization.

PRRI released a Nov. 11 poll of more than 1,300 Nebraskans that shows they are divided about demographic and cultural shifts changing communities, yet optimistic about their ability to work together across racial and religious lines.

Jackson said the results from Nebraska are similar to a national poll released in February that found Americans deeply divided by party on religious and ethnic pluralism.

"Despite Nebraska being a little more Republican, a lot of these results looked pretty similar as far as experiences with diversity and their preferences for a diverse society," she said.

Jackson said there's a perception that red states are going to be much less tolerant, much more clearly conservative in their viewpoints.

"Nebraskans look like average Americans despite being less diverse than the country as a whole," she said.

Jackson said Nebraskans are optimistic about being able to come together to solve problems.

"When you ask about religion and race and ethnicities, Nebraskans are very optimistic that people can come together across religious and racial lines to solve problems," she said. "Where that falls apart is partisanship. We see that throughout the report. When you bring partisanship in, Nebraskans, like the rest of the country, become more skeptical that those partisan divides can be bridged."

Only 45% of Nebraskans have taken action on a civil or political issue. Twenty-two percent sign petitions, but fewer than one in 10 have attended a protest or rally. Two percent of those asked volunteer on presidential campaigns and 1% volunteer for other types of campaigns aside from presidential elections.

Most Nebraskans don't wander far from home. Forty-six percent of Nebraskans live in the communities where they grew up, with only 33% of Americans overall reporting similar situations. More than half — 52% — say they've spent their entire lives in the state and 25% have lived there for 20 or more years. 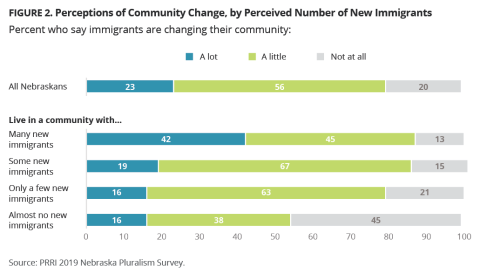 Sixty-two percent of Nebraskans support allowing immigrants who were brought illegally to the United States as children to gain legal residency. Democrats support it at 81%, independents at 63% and Republicans at 47%. For Nebraskans who live in a community with a lot of immigrants, they support it at 61% — more likely than those in communities with few immigrants (57%) or almost no immigrants (59%).

"We saw a lot of similarities with Nebraska and the national survey, which is interesting when you think about it because Nebraska is less religiously diverse than the nation and as a whole," said Jackson. "Within Nebraska, we were only able to look at white evangelical Protestants, mainline Protestants, Catholics and unaffiliated."

Forty-one percent of Catholics prefer a wide range of religions, and 16% prefer a Christian majority. The rest of Catholics — 42% — fall in the middle of the two options.

The religiously unaffiliated are more likely to support religious diversity, at 68%. 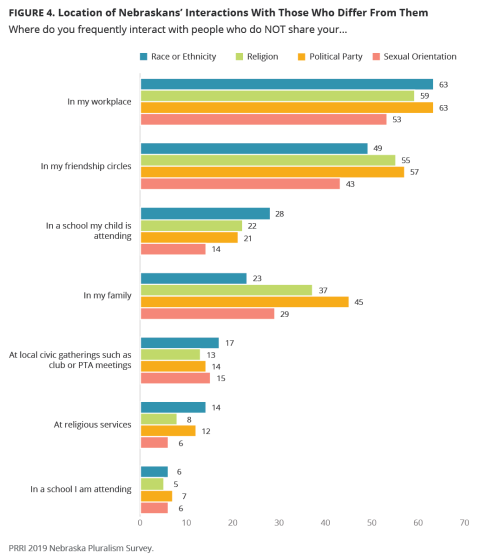 Nebraskans who do have some interactions with people of different backgrounds are interacting in the workplace by 63%. Similar to most Americans' experience of diversity, the workplace interactions are more common than any other social gatherings by nearly 15 percentage points, according to the survey.

"Nebraska Democrats show a little more tolerance toward Republicans than Democrats nationally, and they are more likely to have interactions with people of different parties within their families than Democrats nationally," said Jackson. "This reflects the more Republican-leaning nature of Nebraska. Democrats are realistic that, in a state where the partisan distribution leans against them, it's a real possibility their child could marry a Republican. They seem to have adjusted their expectations accordingly."

Additional findings in the survey saw 58% of Nebraskans mostly believing the state is going in the right direction and 41% think it is on the wrong track.

[Elizabeth A. Elliott is the assistant editor at Enterprise Publishers in Blair, Nebraska. She most recently worked as a staff writer at the Arlington Catholic Herald in Arlington, Virginia.]