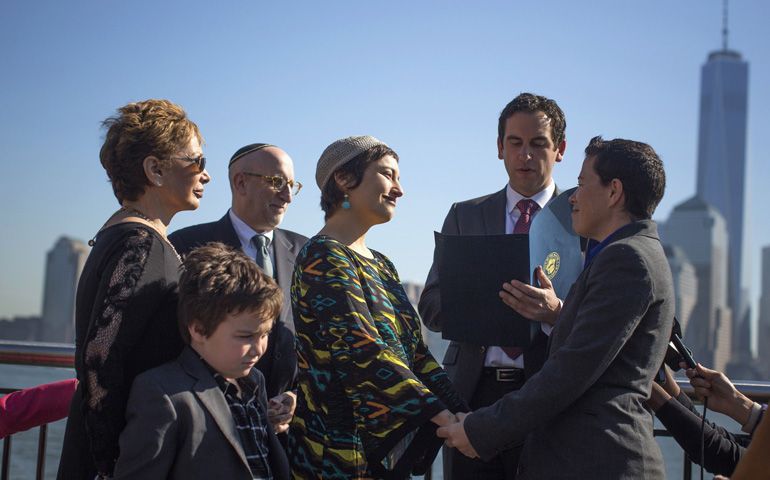 Trenton, N.J. — New Jersey's governor withdrew his appeal of a state judge's ruling allowing same-sex couples to marry, saying through a spokesman that he "strongly disagrees" with the court "substituting its judgment for the constitutional process ... or a vote of the people," but acknowledged such marriages are now "the law."

In announcing that Christie was withdrawing his appeal, his spokesman told the media: "The governor will do his constitutional duty and ensure his administration enforces the law as dictated" by the state Supreme Court.

New Jersey joins 13 other states and the District of Columbia in legalizing same-sex marriage.

Catholic teaching upholds the sanctity of traditional marriage, between one man and one woman, and also teaches that any sexual activity outside of marriage is sinful.

The New Jersey Catholic Conference, the public policy arm of the state's Catholic bishops, did not have an immediate response to Christie's decision but a long-standing statement on the conference website, njcathconf.com, stated that "same-sex unions may represent a new and a different type of institution -- but it is not marriage and should not be treated as marriage."

"Citizens must care about the government's treatment of marriage because civil authorities are charged with protecting children and the common good, and marriage is indispensable to both purposes," it said. "Citizens have the right and the responsibility to hold civil authorities accountable for their stewardship of the institution of marriage.

"Citizens also have the responsibility to oppose laws and policies that unjustly target people as bigots or that subject people to charges of unlawful discrimination simply because they believe and teach that marriage is the union of man and a woman," it added.

In her September ruling, Jacobson said same-sex couples in New Jersey were entitled to the same rights and benefits "as opposite-sex couples."

Since June 26, when the U.S. Supreme Court ruled the federal Defense of Marriage Act to be unconstitutional, she said, "several federal agencies have acted to extend marital benefits to same-sex couples."

"However, the majority of those agencies have not extended eligibility for those benefits to civil union couples," she wrote.

"As a result New Jersey same-sex couples in civil unions," she continued, "are no longer entitled to all of the same rights and benefits as opposite-sex marriage couples," who receive federal marital benefits "for no reason other than the label placed upon their relationships by the state."

In testimony before a legislative committee in January 2012, Patrick Brannigan, the Catholic conference's executive director, urged the Legislature "to continue to recognize marriage as a union between one man and one woman. This is critical as marriage is the foundation of the family. The family, in turn, is the basic unit of society."

He added, "Marriage as a union of one man and one woman has its roots not only in human tradition and history, but also in natural law, which transcends all man-made law."

The New Jersey Catholic Conference statement reiterated Catholic teaching that "our homosexual brothers and sisters are beloved children of God" and "the fundamental human rights of homosexual persons must be defended. "Everyone must strive to eliminate any forms of injustice, oppression, or violence against homosexual persons" and any sign of "unjust discrimination" must be avoided.

"But it is not 'unjust discrimination' to treat different things differently," it said. "Same-sex unions are not, in fact, the same thing as the union of one man and one woman in marriage."

In reaction to the New Jersey Supreme Court's decision Friday to let same-sex marriage proceed, Brian Brown, president of the National Organization for Marriage, which opposes such marriages, said the ruling was "another sad chapter in watching our courts usurp the rights of voters to determine issues like this for themselves."