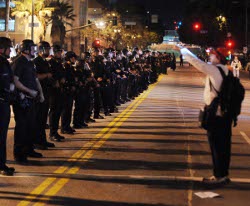 An Occupy Los Angeles protestor faces off against police in December. (Jeff Dietrich)

Most Americans haven't the slightest idea what this arcane Latin term might mean or why it might be important to them, but it is the reason why most of the cases against Occupy Los Angeles are being dismissed.

It is also the reason why President Barack Obama signed HR 155, the National Defense Authorization Act, into law, giving the president and the military the authority to hold U.S. citizens indefinitely without charges and bringing them before a judge.

Although I have been arrested and jailed scores of times over the years for civil disobedience, it was not until I was arrested and jailed with 300 "occupants" of Occupy Los Angeles on Nov. 30, 2011, that I had a renewed appreciation for habeas corpus.

Because of habeas corpus, jailers and clerks had to scurry with unnatural speed to get all 300 of us to court or drop charges within the required three days. Because of habeas corpus, the prosecuting attorneys had to scramble to make their case and find witnesses within the 30 days required for a "speedy trial." Because of habeas corpus¸ the arresting officers and their superiors had to cancel vacations, change their schedules and postpone important meetings in order to testify. Habeas corpus threw the whole system into disarray. When my case came before the court, both prosecutor and judge were delighted to offer me a "deal": plead guilty, get time served, no probation, no fine, no court fees, just get the hell out of here. Best deal I ever had from a prosecutor! As the saying goes, I "made out like a bandit."

On the other hand, Martha, my fellow community member, was not offered a deal. But her trial was a profound affirmation of the Bill of Rights and habeas corpus. Her public defender was brilliant. In her opening statement, she told the jury that Martha Lewis did not break the law; rather, Ms. Lewis rightfully understood herself and Occupy Los Angeles to have been invited by Mayor Antonio Villaraigosa and the City Council to be present on the City Hall plaza lawn. She said Martha was only doing what every citizen in the United States had a right to do: She was voicing her opinion in public space, and that activity is guaranteed by the Constitution. She virtually canonized Martha as a saint of the First Amendment who stood up against the police for the rights of all U.S. citizens.

After three days, Martha's case was dismissed because the prosecutors were unable to present evidence against her. The officer who claimed to have arrested her was not allowed to testify because he had not been made known to the defense beforehand. No arresting officer, no arrest, no case ... case dismissed. Some might say that the right to habeas corpus and a speedy trial are a detriment to justice, because these rights let guilty criminals like Martha and myself go free. They would, of course, be in the same camp as the CIA, the military and the president, who want to hold "terrorists" indefinitely.

There is a general public sense that we need protection from terrorists, even if it means suspending habeas corpus. But I have been identified by various federal prosecutors and the FBI as a domestic terrorist -- a nonviolent terrorist, but a terrorist, nonetheless. And some law enforcement agencies have begun to label the Occupy movement as a terrorist organization. Anyone who takes a strong stand against government and corporate policies can be labeled a terrorist and held indefinitely. The foundational rights guaranteed by the Bill of Rights, and even before that by the Magna Carta, have been put into the hands of anonymous, unaccountable bureaucrats and administrators.

The vote in Congress to pass HR 155 was overwhelmingly positive, with huge support on both sides of the aisle.

From a certain perspective, it is understandable that the president and liberal Democrats might sell out basic constitutional rights to "big government" and the maintenance of empire.

You have to put your body where your principles are. As labor organizer César Chávez said upon breaking his historic 25-day fast in 1967: "We are poor ... but we have something the rich do not own, our bodies and the justice of our cause." The truth is that the only thing we really own is our body, and the only time that habeas corpus really matters is when our bodies are hauled off by the authorities.

Hocus pocus is a medieval corruption of the Latin; it is the "make-believe" that charlatan magicians conjure when they pull the rabbit out of the hat. Habeas corpus is real; it means to "make the body appear." When we put our bodies in peril, it is essential that we do not disappear; it is essential that the authorities be required to "make our bodies appear." Otherwise, we are mere rabbits in the hats of charlatan bureaucrats, cops and presidents who can arbitrarily choose to conjure us or not at their whim. May this not be so. May this not be so.

[Jeff Dietrich is a 40-year member of the L.A. Catholic Worker. His most recent book, Broken and Shared, is published by Marymount Institute Press.]