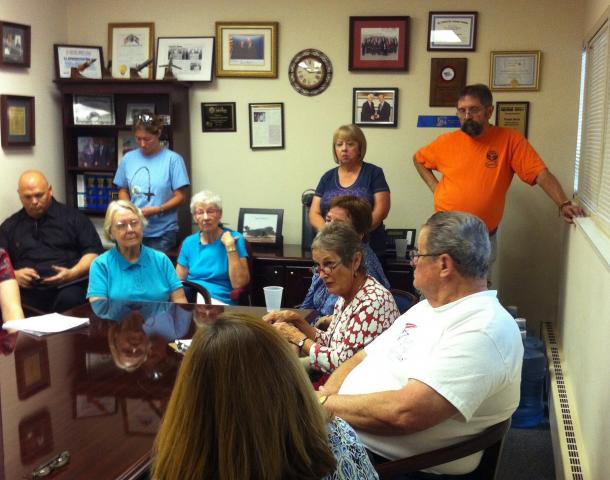 ST. LOUIS -- The day after Social Service Sr. Simone Campbell of NETWORK gave an impassioned speech at the Democratic National Convention, members of the organization's Missouri arm took an equally heartfelt message to lawmakers and politicians across the state as a continuation of the Nuns on the Bus tour.

"Our experience is with the poor," said Loretto Sr. Mary Ann McGivern, who led the Missouri tour. (McGivern also blogs for NCR.) "And we know the suffering that (the Ryan budget) will bring."

This message echoed Campbell's remarks at the convention Wednesday night.

"Paul Ryan claims his budget reflects the principles of our shared Catholic faith," Campbell said. "But the United States Conference of Catholic Bishops stated that the Ryan budget failed a basic moral test, because it would harm families living in poverty."

The Missouri bus tour began Tuesday afternoon with three stops in the Kansas City area and is scheduled to end Friday in Hannibal.

In a press release announcing the tour, NETWORK outlined five areas of concern with Ryan's proposal for the 2013 budget:

Out of the office

Both Akin and Wagner were absent from their offices when the Nuns on the Bus contingent arrived for their appointments. This did not seem to bother the group.

"I felt like they were listening," said Br. Daryl Charron of Missionaries of the Precious Blood in Kansas City. "The folks working for (Akin and Wagner) are the future leaders. We believe we're planting the seeds of good policy in them."

At both stops, staff members listened to statements from each person present and took notes, promising to share the information with the congressman and candidate.

"What I came here for as an independent is to ask Ann Wagner and people like Ann to just reach across the table, and have some bipartisan cooperation," said Kirkwood resident Michelle Martise, who said she is Catholic.

Martise, 49, said a nanny state is not the answer, but asked Wagner campaign manager Aaron Willard to encourage the candidate to think creatively about ways Wagner would handle the federal budget if elected.

Manchester resident Pat Woodward, 68, also came out to support the Nuns on the Bus.

"Do we have to make changes in some of these entitlement programs? I understand that," she said. "But at the same time, we're going to increase military spending by billions of dollars. Does this make any sense at all?"

Like Martise, Woodward called for a different approach to the 2013 budget.

"I've had a good life," the retiree said. "My husband and I have been very well off. We can certainly do more. And if we can do more, others can do more."

Akin and Wagner staffers took note of the supporters who, like Martise and Woodward, live in the 2nd Congressional District. Akin currently represents the district in the House, and is running for U.S. Senate against incumbent Claire McCaskill, a Democrat. Wagner hopes to capture Akin's House seat.

The Nuns on the Bus visit to the St. Louis area came less than a month after Akin made headlines with his comments about abortion in cases of rape. His remarks caused members of his own party to call for him to withdraw from the U.S. Senate race. 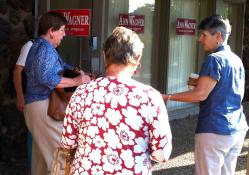 At Wagner's office, Willard mostly listened as the Nuns on the Bus group and its supporters spoke about why the Ryan budget would be bad for America. After the meeting, Willard said it was the largest group to visit Wagner's office with a message about the budget.

He said local small-business owners come in with concerns about staying afloat in a sea of regulations, including the Affordable Care Act.

"A lot of them are family enterprises. They're talking about how hard it is with all the regulations," he said. "And we have a lot of people who are frustrated with the amount of government spending. They say, 'I don't know how we're going to sustain this.'"

At Akin's office, district and communications director Steve Taylor acknowledged that government plays a role in helping citizens on the margins of society while stressing a difference in perspective.

"The congressman doesn't disagree that we need to take care of those in need," Taylor said. "But on the other side of the equation, budgets have moral consequences. There were good points made here. But the congressman is also cognizant of how we need to keep government spending in check in order to have an economy that will help people have jobs."

At a time when voters are bending the ears of politicians like Akin and Wagner about government spending, McGivern said the message about preserving a host of social programs is a hard sell.

"The staff took careful notes. They interacted. They wanted to be sure they understood our points," she said. "I don't think their reports will persuade Mrs. Wagner or Congressman Akin. They've stated their policies. And yet, you always hope that when they hear the passion, when they see that 15 or 16 people come of a morning. That's important."

McGivern asked Akin's and Wagner's staffers to share information about The Faithful Budget with their bosses. According to its website, the alternative to the Ryan proposal "will protect the common good, values each individual and his or her livelihood, and helps lift the burden on the poor, rather than increasing it while shielding the wealthiest from any additional sacrifice."

As McGivern prepared to lead the Nuns on the Bus from St. Louis County to Cape Girardeau on Thursday, she said she was inspired by the supporters who accompanied the group to the offices of Akin and Wagner.

"People have lives," she said. "But they came to talk about their own personal experiences and they spoke so eloquently. Everybody stayed on point. They absolutely understood we were here to talk about the Ryan budget and they had things they wanted to say."

[Holly Edgell is a freelance writer based in St. Louis.]

A Response to Fr. Sirico