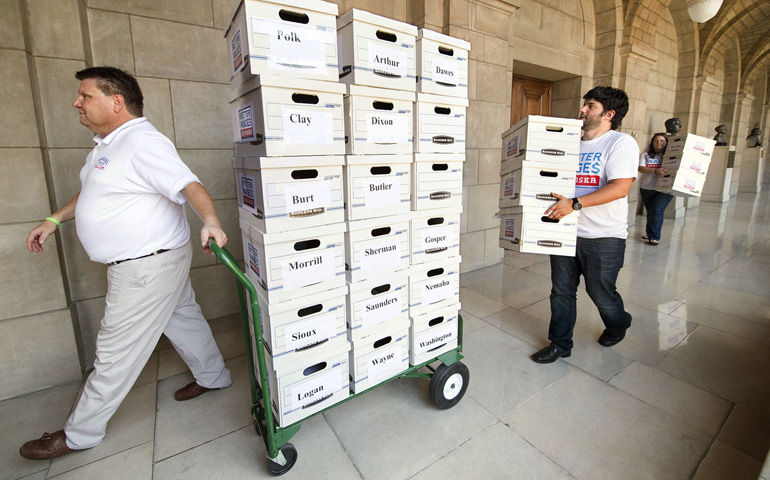 On July 3, 2014, Rodney Vicek (left) of Lincoln, Neb., leads a group hauling boxes that contain some of the signed petitions to raise the state's minimum wage, enough to get the measure on the ballot in November, when it passed. (AP Photo/Lincoln Journal Star/Francis Gardler)

They are white, black, Latino and Asian. They lean left and they lean right. They are rural, urban, suburban, young and old.

Almost eight years after the crash on Wall Street, with inequality soaring, what does it take to mobilize historically diverse groups of low-wage Americans, many of whom never expected to find themselves "struggling," under one economic banner?

"The public has no trouble understanding what we are talking about," said one organizer.

"It's not like we're trying to explain comprehensive immigration reform," said another.

Across America, organizers working to raise state and municipal minimum wages testify to the power of simple messaging and face-to-face appeals when reaching out to a mixed bag of voters. Focus on a straightforward, nondivisive problem, they say, get folks to rally, and move to more complex issues from there.

"Everybody wants a good job. Everybody wants to be able to work a full day and come home and spend time with their family, or have a life outside of work," said Sara Niccoli, executive director of Labor-Religion Coalition of New York State. The coalition's Faith for a Fair New York project mobilizes faith leaders to work for economic justice.

"These are very common goals that we all share, and when we talk about them, all of a sudden, whether you're Republican or Democrat, city or country, we all basically agree."

Statewide, "people view themselves as being very different despite the fact that the reality on the ground is very much the same," she said. "We always have to be thinking, 'How do we create a movement that includes both New York City, its own beast, and upstate New York, which is very rural?'

In other words, the problems of a "low-wage economy," including "scheduling issues and not being able to pay the rent at the end of the month," affect people in both regions. Residents in both parts of New York get it.

Across the country, in Oakland, Calif., Jennifer Lin has seen a similar coalescence over the issue of the minimum wage.

As research director for the East Bay Alliance for a Sustainable Economy (EBASE), Lin works "mostly with people of color, low-income folks, immigrants."

This past election cycle, EBASE worked within a community, labor and faith coalition called Lift Up Oakland to introduce a ballot measure that would increase the minimum wage from $9 to $12.25 and require employers to offer sick leave.

According to a study by the University of California, Berkeley, the increase in pay and sick leave would affect about 25-30 percent of Oakland's overall workforce, some 40,000 to 48,000 people — close to 80 percent of whom are either black, Latino or Asian.

"I think folks will say, 'Oh, it's the Bay area, of course it will pass here,' " Lin said. "But we still faced some strong opposition from the [local] chamber of commerce, which tried to do an end run around the 33,000 signatures we gathered to put our measure on the ballot."

In response, the coalition made reaching out to small businesses "a core part" of its strategy.

Meanwhile, there wasn't much difficulty getting low-wage Oakland residents on board, said Kristi Laughlin, project director for EBASE's interfaith program, Faith Alliance for a Moral Economy.

"People are suffering so much," she said, especially in the Bay area, "where the cost of living is unusually high. "No low-wage workers think what they make is adequate to live on."

According to Laughlin, crafting a ballot measure rather than seeking legislation played a crucial role in convincing voters.

Legislation would have meant working with politicians who peddled "misconceptions" about the minimum wage prior to the election, she said. Who knows how badly the result might have been carved up?

But with a ballot measure, EBASE and the Lift Up coalition were able to pinpoint what "people really need" and "not make compromises."

"And we don't see that enough," said Laughlin, a Catholic. "We're living in this national climate where you fight for what's winnable and not what's right. And there's a real power to fighting for what's right. People sense it and feel it. It's something we can all get behind."

From a progressive point of view, the ballot measures were one of the only bright spots on Election Day, which saw Democrats getting trounced by Republicans and losing the Senate.

After the election, some progressives faulted the Democrat Party for not running a clearer campaign on its economic record. More generally, Democrats were accused of shying away from their core values.

Judy Conti, a practicing Catholic and the federal advocacy coordinator for the National Employment Law Project, which works "to restore the promise of economic opportunity in the 21st century economy," voices a similar criticism of some U.S. Catholic leadership in regards to the minimum wage.

"Honoring the dignity of work and workers is one of the central tenets of our faith," she said, mentioning the good work of the Jesuit Conference, the Franciscans and groups like NETWORK on the minimum wage.

Conti also brought up the June 2013 Senate testimony of Bishop Stephen Blaire of Stockton, Calif., who called it a "scandal that the richest country in the world has allowed over 23 million children in working poor families to become the norm."

Since then, the bishops of Massachusetts and Maryland issued joint statements urging state lawmakers to increase the minimum wage; additionally, in August, Bishop Edward Burns of Juneau, Alaska, wrote an opinion piece for JuneauEmpire.com supporting an increase.

As for the U.S. Conference of Catholic Bishops as a whole, Conti's feelings were mixed. The conference has not been as active on the minimum wage as it could be even, she said, despite having stated its view on the matter.

"The conference as a whole is so thoroughly devoted to the religious freedom and abortion issues, as they define them, that I think they're missing opportunities to have a meaningful impact on Capitol Hill about the things that affect the day-to-day lives of the members of their congregations who are struggling the most," she said. "I would love and welcome the opportunity for the bishops to get out there more on the minimum wage."

Conti went on to call the minimum wage a "pro-life" issue.

"One of the leading drivers for people choosing to have abortions is that they live in poverty and they know they can't afford children," she said. "You look at the Guttmacher Institute, which does the best work on tracking who has abortions and why -- poverty is the single biggest driver.

"You want to stop abortions?" she said. "Raise the minimum wage. Make work pay so that people can support themselves and their families."

Similarly, many field organizers are now beginning to draw their own connections, viewing the minimum wage as a way to build bridges in society and explain more complex social justice issues.

In Nebraska, a red state where "we don't win all the time," a midterm ballot measure to raise the minimum wage passed by about 60 percent in large part because it was "so direct," said Rachel Gehringer-Wiar, field director for Nebraska Appleseed, which orchestrated a volunteer effort to collect signatures throughout the state.

"It was rare for someone not to sign the petition or to not listen to us," she said. "Even if you don't make minimum wage now, you remember when you did, or you have a friend that does, or a family member. Most people end up being connected to it in some way. It is a very straightforward thing."

Gehringer-Wiar plans on approaching the same people who signed the petition about "other issues, like Medicaid expansion." She wants to see "how far we can make those connections."

"You can't talk about the minimum wage in isolation," said Kokayi Kwa Jitahidi, campaign director of a citywide minimum wage effort for the Los Angeles Alliance for a New Economy.

"Throughout the history of social change in this country, you find it's the issues that people already understand that are used as ways to build further understanding and get to deeper problems," he said.

"During the Civil Rights movement, with the desegregation of lunch counters," he said, "organizers understood that it created a very clear and deeply felt experience for African-Americans." But the effort "wasn't just about desegregating lunch counters. It was always about the broader, bigger more complex issue of tearing down racial discrimination."

"The minimum wage is similar," Jitahidi explained. "Everything from workplace discrimination, to wage theft, to affordable housing -- it's unique in that it touches all of these issues."

"It's a very straightforward thing," he said. "It hits on what people are experiencing."

A version of this story appeared in the Jan 2-15, 2015 print issue under the headline: Diverse voters rally behind wage hikes.