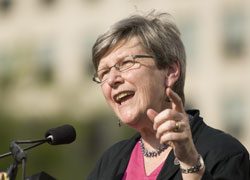 WASHINGTON -- Along with Congress’s narrow passage of national health reform in late March came a new level of political influence on Capitol Hill for at least two groups: pro-life Democratic members of Congress, and national Catholic organizations that are both pro-life and active on social justice issues.

The party’s majority is decidedly pro-choice and “a lot of them would be happy to silence [the pro-life members] or throw them out,” Langan said, but by their efforts to work with President Obama on the health reform bill they established themselves as an important voice in the party.

National Catholic organizations that are plainly pro-life but broke with the rigid position of the U.S. bishops on their interpretation of the abortion language in the final legislation were credited with providing the leverage some pro-life members of Congress needed to vote in favor of the bill. These included the Catholic Health Association, the Leadership Conference of Women Religious, Network (a Catholic social justice lobby), Catholics United, and Catholics in Alliance for the Common Good.

Chief losers, observers said, were Republican members of Congress who marched lockstep in opposition to all health reform, forgoing any opportunity to help shape the legislation in their all-out partisan effort to defeat it at any cost; and the U.S. Conference of Catholic Bishops, which de facto aligned itself with Republican obstructionism when push came to shove in the final stages of the health care reform debate.

Top officials of the bishops’ conference demanded up until the final vote that members of Congress reject a bill that most commentators and legal analysts found completely abortion-neutral -- because of what bishops’ conference leaders portrayed as unprecedented actual and potential federal funding of abortion in that bill.

In fact, only the bishops’ conference, the National Right to Life Committee and a few other right-to-life organizations, such as the American Life League (which has often criticized the bishops’ conference for softness on abortion), found the final version of the new legislation less abortion-restrictive than the language found in the earlier House version, which the bishops had supported.

Several observers said that what really appears to have started the crucial swing leading several pro-life House members from undecided or negative to a yes vote on the Senate bill was the March 11 statement by Sr. Carol Keehan, president and CEO of the Catholic Health Association.

Keehan, a member of the Daughters of Charity, urged the House to pass the Senate-approved bill with some changes not related to abortion, declaring that despite other weaknesses that still needed fixing, the Senate bill clearly did not introduce or expand federal funding for elective abortion.

“I read Sr. Carol’s statement the morning of March 14 in Los Angeles,” said Sister of Social Service Simone Campbell, a longtime legal advocate for the poor and executive director of Network since 2004. She said she told herself that Keehan “couldn’t and shouldn’t stand alone” but needed strong support from other segments of the Catholic community.

Campbell immediately issued a statement on behalf of Network lauding the Catholic Health Association’s stand and expressing Network’s view that the legislation would reduce the number of abortions by providing better access to health care for millions of people.

She also drafted a letter to members of Congress that she distributed to many leaders of women’s religious orders, urging passage of the Senate bill. Many order heads, including the president of the Leadership Conference of Women Religious, signed on.

The letter said in part, “Despite false claims to the contrary, the Senate bill will not provide taxpayer funding for elective abortions. It will uphold longstanding conscience protections and it will make historic new investments -- $250 million -- in support of pregnant women. This is the real pro-life stance, and we as Catholics are all for it.”

As other pro-life Catholic organizations -- but not the bishops’ conference -- added their endorsements to the Catholic Health Association’s position, the tide turned among several pro-life Democrats in the House, especially a few key Catholic Democrats. Those changes brought House Democrats to a political lock on passage of the Senate version of the health care reform bill, despite continuing unanimous Republican opposition.

When Obama signed the bill into law, during the signing ceremony “he told me it [the new law’s passage] was because of us,” Campbell said.

Langan said he thought the bishops’ opposition to the bill was based less on the actual abortion language in the bill than on a “reading of the long-term desires of the Democrats” to advance a pro-choice agenda.

That’s “not a foolish view,” he said, but “it’s very difficult to lay that out in declarative sentences” concerning the actual legislation at hand.

He said there is a camp among the U.S. bishops that regards the Republican Party as “the only reliable party” on the abortion issue.

But in the battle over health care legislation “the pro-life Democrats came out stronger. ... At the end of the day they were keener to work with the president than against him. I think that was important in maintaining the continuing viability of pro-life Democrats.”

“Part of what the bishops have to figure out is that there’s no divine guarantee that the Republicans will win all elections going forward, and they have to find ways to realize their dearest values while under democratic rule,” he added.

A prominent theologian told NCR that she was delighted with the health care bill and “very glad the bishops were defeated on this,” because in her view the bishops’ conference acted as if it were the sole moral arbiter on a highly complex legislative issue.

In essence, she said, the bishops made it a power struggle, declaring in effect, “If you don’t do it exactly our way, we’re going to stop you.”

“They need to get the message that they must cooperate,” she said. “They’ve got to admit that somebody besides themselves could have a moral compass.

“If the sisters had not intervened, I think the bill would have been defeated,” she said.

“It wasn’t sisters up against bishops,” she added. “It was sisters for the best that we could do for life in the present situation.”

Stephen F. Schneck, director of the Institute for Policy Research and Catholic Studies at The Catholic University of America in Washington, said the interventions by the Catholic Health Association, the Leadership Conference of Women Religious, and Network on behalf of the bill “made a huge difference for the pro-life Democrats that were wavering on the bill.”

He said he thinks the bishops “overly relied on a particularly narrow interpretation of some features of this legislation.”

“It is perfectly legitimate for seriously pro-life Catholics to be either for or against this legislation, to come to a different moral determination about whether they think this bill has a potential for reducing abortions or whether in fact it would increase abortion. That’s a very difficult prudential determination to make,” he said.

Schneck said the bishops seemed not to recognize that difficulty and instead insisted on the abortion language of the original House bill “or nothing -- there was no other way to deal with this problem. Prudence demands a certain flexibility, looking for different ways to solve a problem, even a moral problem.”

Langan and Schneck said they did not think the bishops’ defeat on the health bill would hurt their influence on the Hill on other issues, such as immigration.

But Jesuit Fr. Thomas J. Reese said that if other bishops follow the example of Bishop Robert F. Morlino of Madison, Wis. -- who said in a March 25 column that the Catholic Health Association and other Catholics who disagreed with the bishops’ position were in conflict with “the teaching of the church” -- there is another issue at stake.

“What the bishops should do is acknowledge that this is a disagreement. They should say, ‘We think these people are wrong, but they’re not bad,’ ” Reese said. But if they raise it to the level of saying those who disagree are denying church teaching, “they put at risk their true authority as teachers of the faith,” he said.

Editorial: Move forward to health care for all

New link to the Sisters of Mercy voters' guide