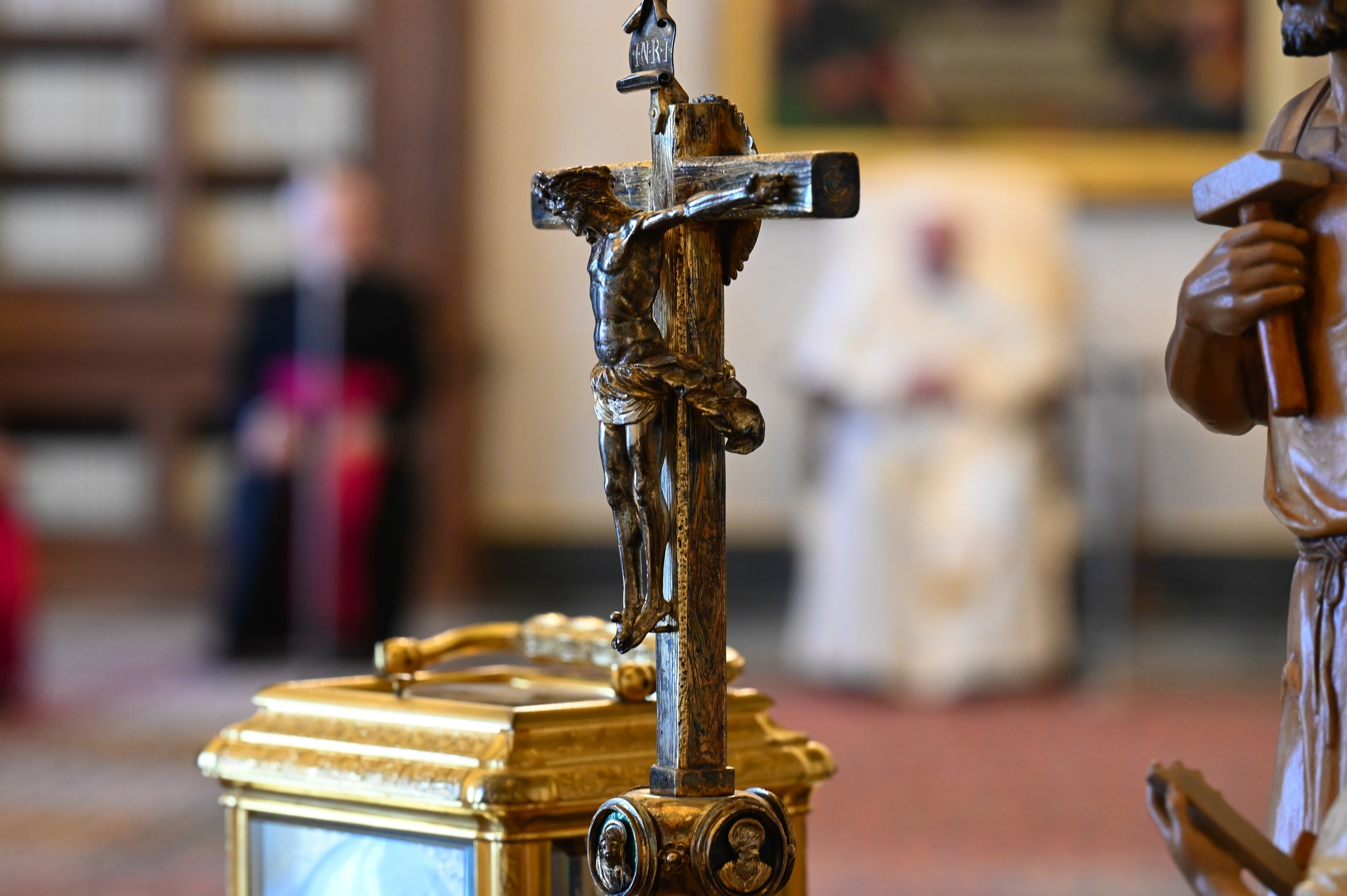 A crucifix is pictured as Pope Francis leads his general audience in the library of the Apostolic Palace at the Vatican April 14. Italy's highest court of appeal has ruled that public school classrooms can approve the presence of the crucifix because it does not discriminate against anyone. (CNS/Vatican Media)

Italy's highest court of appeal has ruled that public school classrooms can approve the presence of the crucifix because it does not discriminate against anyone.

The court specified, however, that all religious symbols can also be "welcomed" as long as it is decided in a democratic, civil and "gentle" manner by students and faculty together.

That means, it said, all decisions regarding their presence must never be imposed and must seek "reasonable accommodation" between the different positions or convictions of people in the school community that includes respecting a person's freedom of and from religion; in essence, decisions cannot come by a "tyranny" of the majority or the veto-power of one individual.

Italy's Supreme Court of Cassation — the country's court of last resort — released its 65-page brief explaining its decision Sept. 9 concerning an appeal against the display of the crucifix in the classrooms involving an Italian high school teacher whose claims were first rejected in a lower court in 2013 and in a court of appeals in 2014.

The full-time Italian literature teacher said his freedom of conscience was violated and he wanted the freedom to teach without the presence of a crucifix on the wall behind him.

According to court proceedings, the teacher would enter the classroom, take the crucifix down from the wall for the duration of his lesson and then rehang it when he was done teaching.

The teacher also claimed he was discriminated against for not accepting the presence of the crucifix when the school principal suspended him without pay for 30 days. The suspension came for not following a mandate issued by the principal ordering all teachers to respect the presence of the crucifix in the classroom in question because it had been a decision approved of by the majority of the students during an assembly.

The Supreme Court said it took on the appeal because it represented an issue of "paramount and particular importance," that is, what is the best way to "balance" a number of freedoms and rights in a public classroom, particularly in a secular nation where church and state are separated.

The case was also different from other preceding but similar cases involving the presence of a crucifix because a group of students wanted it displayed, not government authorities or school administrators, and the aggrieved party was not a student or parent, but an employee of the school.

In its final decision, the court rejected one part of the teacher's appeal, saying the presence of a crucifix in a classroom is not a "discriminative act" against a person of no or a different faith. The court cited the 2011 ruling by the Grand Chamber of the European Court of Human Rights on Lautsi v. Italy, which determined nations are free to regulate religious symbols as they deem fit as long as state authorities are not seeking to indoctrinate or violate basic rights with their decisions.

The court also reiterated that the crucifix does not indoctrinate because it is "a passive symbol" in which there is no evidence its presence has any influence on impressionable students, much less an adult teacher.

The supreme court noted that there is no actual legislation that provides for or mandates the presence of a crucifix in public schools and it would be unconstitutional for any public "power" — official or entity — to make it obligatory.

What does exist is a series of decrees issued during Italy's fascist period in the 1920s, which includes the crucifix among a list of recommended school furnishings and decorations.

The supreme court said such norms can still be interpreted in a way that does not go against the current constitution guaranteeing religious freedom by allowing the school community — not a government or public institution — to decide what symbols are displayed. The state must be neutral in regard to different faiths, but it is legitimate for its people to be allowed to express or practice their own beliefs, including atheism, in the public sphere and respect that right for all others.

What is key in this decision-making process, the court said, is that it be an open, respectful and "good-natured" process of discussion and discernment that involves the entire school body and provides "reasonable accommodation" for all positions.

This is why the court determined that even though the teacher did not face discrimination by the presence of the crucifix, the mandate and sanctions issued by the principal were illegitimate because it was a mandate based on a majority vote that failed to take all sides into account — particularly the dissenting teacher's.

Freedom of and from religion does not call for forbidding religious symbols from classrooms, it said, however, explaining that "the public space cannot be occupied by just one religious faith, even if it is in the majority."

At the same time, the crucifix is part of Italy's vast cultural patrimony and is a part of its history and popular tradition, it added. As such, the cross and the passion of Christ have come to also represent some universal values such as human dignity, peace, fraternity and solidarity, for nonbelievers, too, it said.

The school community can and must come together and decide, "from the grassroots" and in full autonomy from state influence, which symbols it chooses to welcome and in a way that promotes the fruitful and respectful coexistence of people of different faiths and beliefs, the court said.

State neutrality does not mean "negating or misunderstanding the contributions religious values can bring to the growth of a society," it said; it is being open and inclusive to — not canceling — different cultures, religions and beliefs, and it seeks to guarantee their equal place and dignity.

In fact, it said, any "request for eliminating every element or representation that does not coincide with an individual's personal religious belief is a demand that suffers from rigidity."

The public school must be "an open place that fosters inclusion and promotes the encounter between different religions and philosophical convictions, and where students can learn about their and others' beliefs and traditions," it said.

Allowing the display of different religious symbols in a classroom through civil dialogue and deliberation, it added, teaches everyone how vital and fundamental reciprocal respect is.

It teaches how a democratic society requires a constant and mutual "balancing" of principles and rights to come up with concrete solutions in ways that avoid falling into a "tyranny of the majority," the chaos and conflict of competing values or the veto power of one or a strong minority, it said.