Push on immigration legislation builds on prayer, fasting and preaching 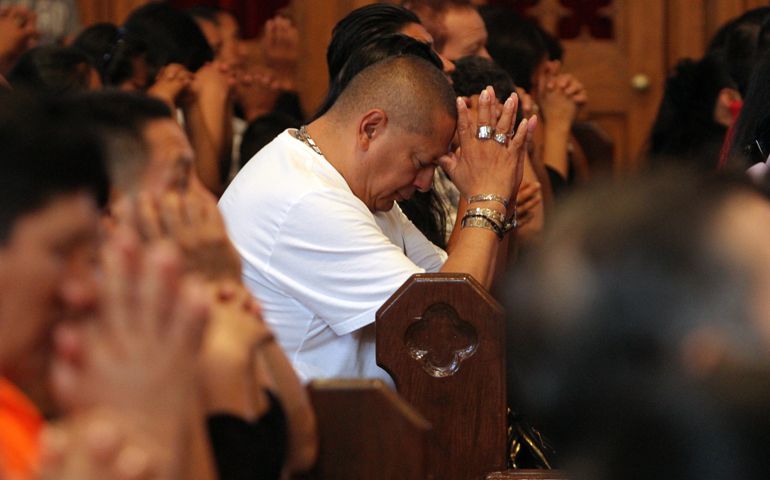 Washington — Faith-based advocacy in support of immigration reform is taking a multipronged approach as Congress resumes after the August break, with prayer and fasting being added to letter-writing and public speaking.

On Saturday and Sunday, dioceses and parishes in 22 states focused on the Catholic church's teaching on migration in homilies and other activities.

Boston Cardinal Sean O'Malley, in a letter Sunday to the people of the archdiocese, reminded them of their roots, saying today's immigrants may "come in good part from Asia and Latin America, but their needs are in many ways similar to those of our ancestors."

"The church's interest in the immigration question continues to be a combination of pastoral care and public advocacy," O'Malley said in the letter. "We seek to provide a welcome in our parishes, schools and social service agencies, and also to have a place in the debate about a fair and just public policy."

Across the country in Los Angeles, Archbishop Jose Gomez issued a statement in his capacity as chairman of the U.S. bishops' Committee on Migration that said, "Now is the time for Catholics to let their elected officials know that they support immigration reform."

He said the immigration system is broken and "as a result, families are being broken apart and millions of people, including children, are being hurt. We need immigration reform to help our nation live up to its beautiful promise of equality and dignity for all people."

In the New York borough of Queens, preaching at Our Lady of Sorrows Church in Corona, Brooklyn Bishop Nicholas DiMarzio drew on the Scripture reading from St. Paul in which he sends the former slave Onesimus in his place to minister. The reading is a reminder of the existence of slavery in the modern world, DiMarzio said, explaining that immigrants who lack documentation are living in a type of servitude "because they do not have the type of freedom and rights that go along with being a productive worker in a free country. You and I know this is the heart of the problem with our immigration system."

Speaking at the church in what he described as the largest immigrant parish in the Brooklyn diocese, he noted that the people there know the reality of immigration in the United States. He asked them to join in prayer for "God's help in convincing our legislators of what we know to be right and true -- that every newcomer to our society deserves respect and a chance to integrate. We cannot condone illegal immigration but we ask only that an immigration system be established that allows workers to come to this country because we need them and respects them for their work."

The four Catholic bishops of Washington state released a pastoral statement saying their call to support immigration reform is "out of respect for human dignity, a value at the heart of our discipleship in Christ, but also in keeping with the unique soul and character of America." The statement was sent to all parishes in Washington state for publication in bulletins at weekend Masses.

"We are convinced that the overall benefits of legislation being proposed outweigh the burdens of our current system, which relegates millions to life in the shadows and subjects them to family separation, detention, and exploitation," said Archbishop J. Peter Sartain and Auxiliary Bishop Eusebio Elizondo of Seattle; Bishop Blase Cupich of Spokane; and Bishop Joseph Tyson of Yakima.

The bishops of Pennsylvania, in a Sept. 3 statement released by the Pennsylvania Catholic Conference, reminded people that the Catholic church "has always provided spiritual and social services to immigrants out of a strong belief that immigrants deserve the same basic rights and freedoms owed to every child of God."

Today's immigrants seek the same opportunities sought by "our ancestors who left difficult situations abroad to establish communities where they could work, support their families and be free to worship and live in accordance with their beliefs," they said.

"Millions of undocumented immigrants live in the United States today. Many left their home countries because of poverty and persecution," the bishops said. "The overwhelming majority is hard-working and poses no threat to anyone. Americans are rightly concerned for our nation's public safety, respect for the law and the solvency of our public institutions. As a sovereign state we have a right to control and secure our borders. But these legitimate issues do not absolve us from fixing a broken immigration system that often fails to protect the basic dignity of immigrant men, women, and children seeking a better life."

On Monday, two women religious, representing the Leadership Conference of Women Religious and the Catholic social justice lobby NETWORK, were part of a teleconference with Jewish and Christian clergy and a member of Congress to announce a 40-day period of prayer and fasting.

Sr. Carol Zinn, a Sister of St. Joseph, who is president of the Leadership Conference of Women Religious, said in a teleconference hosted by the Interfaith Immigration Coalition that "as people of faith, we know that the power of prayer and fasting, together, allows us to create a space for God to transform our minds and hearts and free our wills so that we can reach to others in love as God desires us to do."

"As women religious," she said, "we trust that the power of God's life and love can, in fact, move mountains of division, oppression, injustice and fear to movements of unity, respect, equality and freedom."

The coalition said 5,800 people in 45 states had committed to prayer, fasting and advocacy during a 40-day push for Congress to pass a comprehensive immigration reform bill.

Rabbi David Saperstein, president of the Religious Action Center, noted that the start of the 40-day cycle coincided with the high holy days of the Jewish calendar "when we are called to personal and societal reflection."

"Our nation might well feel itself called to assess how we have achieved -- and failed sadly to achieve -- God's clear and oft-repeated command in the Bible: 'Treat the resident alien as yourself.'"

Sr. Simone Campbell, a Sister of Social Service who heads NETWORK, said wherever the Nuns on the Bus tour on immigration reform went this summer, it was met by immigrants who are "working hard to care for their families and make this a better country." Campbell said their stories of their fear and courage were deeply moving and invigorated the drive of the people on the tour to work on repairing the broken immigration system.

In Minnesota, Sept. 4, Archbishop John Nienstedt of St. Paul and Minneapolis, hosted a discussion on immigration reform at the University of St. Thomas School of Law.

The Catholic University of America in Washington was the scene of a panel discussion Monday tied to the publication of "On 'Strangers No Longer': Perspectives on the Historic U.S.-Mexican Catholic Bishops' Pastoral Letter on Migration."

The book of essays addresses various themes related to the 10th anniversary of "Strangers No Longer: Together on the Journey of Hope," a joint pastoral letter of the U.S. and Mexican bishops' conferences that looked at a range of pastoral, economic and political factors related to migration that are faced by the two countries.