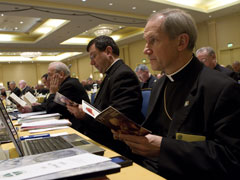 Prelates attend the opening session of the fall meeting of the U.S. Conference of Catholic Bishops in Baltimore Nov. 14. (CNS/Nancy Phelan Wiechec)

BALTIMORE -- Despite predictions in some mainstream press accounts that the U.S. bishops were preparing for war with the Obama administration on the issue of religious liberty, President Barack Obama’s meeting with bishops’ conference president Archbishop Timothy Dolan at the White House a few days before the bishops assembled for their annual November plenary session in Baltimore seems to have defused the crisis.

At a press conference Nov. 14 after the opening session of the four-day meeting, Dolan, archbishop of New York, said of his meeting with Obama, “I found the president of the United States to be very open to the sensitivities of the Catholic community. I left there feeling a bit more at peace about this issue than when I entered.”

In his first presidential address since taking over as conference president, Dolan did not even mention the words “religious liberty.” Instead, he focused on the need for the Catholic church to re-establish its credibility with its own members and in the broader society “because, as the chilling statistics we cannot ignore tell us, fewer and fewer of our beloved people -- to say nothing about those outside the household of the faith -- are convinced that Jesus and his church are one.”

He said that too many Catholics “drift from her, get mad at the church, grow lax, join another, or just give it all up. If this does not cause us pastors to shudder, I do not know what will.”

Dolan said the bishops must “resist the temptation to approach the church as merely a system of organizational energy and support that requires maintenance.” Instead, “the church is Jesus -- teaching, healing, saving, serving, inviting, Jesus often ‘bruised, derided, cursed, defiled,’ ” he said.

Dolan also acknowledged that some of the bruises the church displays are self-inflicted. He quoted Dorothy Day -- “The church is the radiant bride of Christ; but her members at times act more like the scarlet woman of Babylon” -- but urged the bishops not to be discouraged. “We who believe in Jesus Christ and his one, holy, catholic and apostolic church interpret the sinfulness of her members not as a reason to dismiss the church or her eternal truths, but to embrace her all the more.”

Dolan also dismissed the idea of some nostalgic, better past for the church: “As Msgr. John Tracy Ellis used to introduce his courses on church history, ‘Ladies and gentlemen, be prepared to discover that the mystical body of Christ has a lot of warts.’ ”

It fell to Bishop William Lori of Bridgeport, Conn., chairman of the new Ad Hoc Committee on Religious Liberty, to detail what many bishops see as strong cultural and political forces seeking to circumscribe the church’s role in society.

“While recognizing religious freedom as an individual right, we see that religious freedom belongs also to churches and religious institutions comprised of citizens who are believers, and who seek, not to create a theocracy, but rather to be leaven and light within their culture,” Lori said in a speech at the opening plenary session.

“We look for a robust understanding of religious liberty extended to all faiths, an understanding that envisions not only the importance of being able to worship freely but also to bring into the public square truths and values that flow from faith and reason, expressed in works of education, health care, social services and charity,” he added.

Lori noted that threats to religious liberty come from all sides of the political spectrum. He cited not only the Obama administration’s mandates that contraception, sterilization and some drugs that function as abortifacients be provided in all health insurance plans, but also a recent law passed by the Republican-controlled Legislature of Alabama that would require Catholic school and hospital workers to verify the immigration status of those they serve.

He called attention to a range of social services that are “not only beneficial but indeed crucial,” but warned that “it is becoming more and more difficult for us to deliver services in a manner that truly respects the very faith that impels us to provide them.”

“I do think religious liberty is one of the most important issues facing the church today,” Bishop David O’Connell of Trenton, N.J., told NCR. “It cuts across so many other policy concerns, from our defense of traditional marriage to our providing social services to our work with immigrants.”

O’Connell, former president of The Catholic University of America in Washington, said the verdict was still out on whether or not the bishops’ conference can reach agreement with the Obama administration. “I am very happy to see that the president of the United States and the president of the conference had occasion to meet,” he said. “I’d like to be hopeful about the consequences of that meeting but I’ve yet to be convinced.”

Cardinal Donald Wuerl of Washington reported to the bishops that a recent Vatican initiative to receive Anglican communities and priests into full communion with the Catholic church has reached a new level in the United States, with Jan. 1, 2012, as the target date when some 2,000 U.S. Anglicans (Episcopalians) and at least three-dozen priests leading them plan to become Catholic under a special program inaugurated by the Holy See in 2009.

On that date a U.S. ordinariate, a distinct Catholic ecclesiastical jurisdiction for those former Anglican communities, will be formed in the United States, he said.

Among other actions during their Nov. 14-17 meeting the bishops:

In a presentation on the work of the Subcommittee for the Promotion and Defense of Marriage, Bishop Kevin C. Rhoades of Fort Wayne-South Bend, Ind., said public service announcements with the theme of “a good marriage goes a long way” were released in September to 1,600 television stations and 7,000 radio stations.

He also announced the launch of a new website -- www.marriageuniqueforareason.org -- aimed at educating Catholics on the meaning of marriage as the union of one man and one woman. The website corresponds with a new DVD, guide and booklet.

A step in the right direction