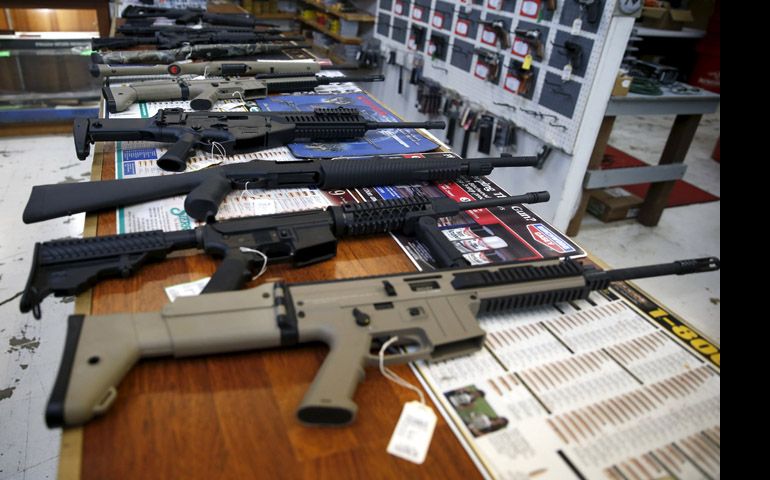 Guns for sale are displayed in Roseburg Gun Shop in Roseburg, Ore., Oct. 3. Archbishop Blase J. Cupich of Chicago, saying it is time to "take meaningful and swift action to address violence in our society," called for stricter gun control laws in Illinois and around the nation. (CNS/Lucy Nicholson, Reuters)
This article appears in the Gun Violence feature series. View the full series.

A simple enough concept, so knock-you-over-the-head obvious that it practically begs for an equally blunt -- if totally oblivious -- response, one made by plenty of pro-gun rights advocates: that more guns make us safer.

But a look at the social science literature surrounding the U.S. gun violence debate shows how painfully real the gun prevalence-gun death correlation is, and suggests that it could prove very difficult to dig the country out of the hole it finds itself in.

In America today, more than 310 million firearms are estimated to be in the hands of private citizens. That is roughly 97 guns for every 100 people. Studies regularly show that where there are more guns, there is more homicide.

Jeffrey Swanson, a Duke University psychiatry and behavioral sciences professor, and a leading expert on U.S. gun violence, believes the more we look into the question of gun access and prevalence in society, the less myths surrounding the gun control debate will hold sway.

Others react to mass shootings where the gunmen are seriously mentally ill, and say that we need to fix the country's broken mental healthcare system.

But doing so would not solve our gun violence problem, Swanson said.

Swanson's research points to a far more mundane explanation for the more than 11,000 firearm homicides that occur in the U.S. annually, the majority of which are the result of arguments, often involving alcohol, often occurring in underprivileged areas, or in troubled domestic settings:

America has an anger problem, and far too many angry Americans have easy access to guns.

According to a study that he and other researchers published in Journal of Behavioral Sciences and the Law earlier this year, nearly nine percent of the U.S. population has a serious anger problem and access to guns at home. The study culled data from a National Institute of Mental Health funded survey estimating the prevalence of different kinds of mental disorders across the U.S.

"Anger is a normal human emotion," Swanson said. "Everybody gets angry. But these are people who, when they get angry, break and smash things, and get into physical fights. … People who have a really short fuse," and who can at times be "uncontrollable and destructive."

They are wound-up, loose cannons, but not seriously mentally ill.

According to Swanson's research, about 1.5 percent of the population "have this impulsive, angry behavior and are carrying a gun around with them out in public."

The finger pulls the trigger?

Other social science research sheds additional light on the toxic quality of guns in society.

Studies show that higher exposure to guns leads to more suicide -- the leading cause of gun death in the U.S. One nationwide study found that people who committed suicide were 17 times more likely to have lived in homes with guns compared to people who did not.

Exposure to guns also leads to increased aggression. In 1967, researchers from the University of Wisconsin demonstrated the reality of a disturbing psychological phenomenon called the "weapons effect."

"Guns not only permit violence, they can stimulate it as well," wrote researcher Leonard Berkowitz at the time, explaining the phenomenon. "The finger pulls the trigger, but the trigger may also be pulling the finger."

Today, the "weapons effect" has been replicated inside and outside of laboratory settings in dozens of studies.

Brad Bushman, a professor of communication and psychology at Ohio State University who studies human aggression and serves on President Barack Obama's committee on gun violence, performed a 2013 meta-analysis of over 50 "weapons effect" studies involving over 5000 participants.

"The mere presence of a weapon can increase aggressive thoughts, angry feelings, hostile appraisals, aggressive behavior," he said, "just seeing one, just the object itself."

"Weapons effect" studies tend to focus on guns. One field study found that people stuck behind a pickup truck at a green light were quicker to honk their horn if a rifle was visibly mounted to the rear window, Bushman said. Another study showed that people with guns in their car were more likely to drive aggressively than people without guns in their car.

"I think this is really an important component missing in the [gun control] debate," Bushman said. "Just merely seeing a gun can make people more aggressive."

"Recent research shows that humans are as fast to notice guns as they are to notice spiders and snakes," he said, and "what this illustrates is the fact that in the human brain, there is a very strong link between guns and danger, guns and violence, guns and aggression."

L. Rowell Huesmann, director of the Research Center for Group Dynamics and head of the Aggression Research Program in the Center at the University of Michigan, agrees.

Vincent DeMarco, national coordinator of Faiths United to Prevent Gun Violence, believes that "the fundamental problem as to why we don't have more gun violence prevention is that people don't know that there is something out there that works."

"The problem is not knowing that gun violence is terrible," he said, "everybody knows that. And the gun violence prevention movement has spent too much time focusing on and emphasizing that."

DeMarco advocates for stronger handgun purchaser licensing requirements. A webpage titled "A Tale of Two States" and put out by Faiths United to Prevent Gun Violence illustrates his thinking.

"In 2007, Missouri repealed its purchaser licensing and background check requirement, resulting in a 25% increase in firearm homicides and an overall 14% increase in murders over the subsequent five years," it reads. "The rise in gun deaths is directly attributable to the repeal of the licensing and background check requirement as the firearm homicide rate during the same period did not increase in adjoining states nor did the national average rise."

By comparison, "Connecticut … continues to benefit from its handgun purchaser licensing law passed in 1994. A new study estimates that the law led to a 40% decline in homicides committed with a firearm during the 10 years following the implementation of the licensing requirement."

Swanson believes these studies offer a powerful argument for the effectiveness of background check laws in reducing firearm homicides. He would like to see more background checks take into consideration the potential for anger issues in individuals seeking a gun.

But in a country as saturated with guns as America already is, merely stopping more guns from getting out into society may not be enough, he cautioned.

"If you have a bunch of laws that are focused on making sure risky people can't buy a gun," he said, "but meanwhile we've got 97 guns per 100 people, that doesn't mean that somebody needs to go buy a gun to commit suicide, or hurt someone else."

From the grave: Noonan on gun manufacturers' moral cooperation in evil