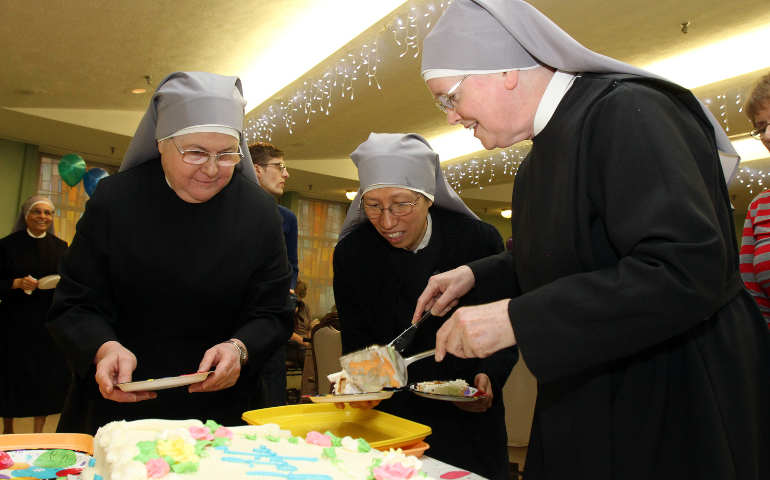 Little Sisters of the Poor prepare to distribute cake during a birthday party for centenarians Jan. 20 at the sisters' Queen of Peace Residence in the Queens borough of New York. (CNS/Gregory A. Shemitz)

The recent court ruling against the Little Sisters of the Poor, a congregation of Roman Catholic women religious, marked the latest, but likely not the last, dustup in the debate over the Affordable Care Act’s (ACA) contraception mandate.

The Little Sisters argued that the mandate violates their religious freedom. The U.S. Court of Appeals for the 10th Circuit ruled that the Sisters had been provided a sufficient way to “opt out” of the ACA’s requirement while still offering free contraceptive care through their insurance providers.

At the heart of the decision was a disagreement over what constituted a violation of religious liberty.

The decision came shortly after new rules were issued by The U.S. Department of Health and Human Services (HHS) on another aspect of the dispute. The rules extend an accommodation to closely held for-profit corporations such as Hobby Lobby, which also object to the contraception mandate, that religious groups can use. It requires groups with religious objections to sign and deliver a form passing the responsibility of providing contraceptive care on to the government, which in turn finds a third party provider.

It is that very accommodation to which the Little Sisters still object. They reject the appeals court ruling that the act of signing the accommodation form does “not substantially burden their religious exercise” or “infringe upon their First Amendment rights.”

“There are two pieces to the problem,” he said. “The first is that the government has set up this contraceptive delivery form, and its forcing people to sign that.”

The Little Sisters and other groups who object to the form argue that the act of signing it amounts to providing contraceptives in the first place. It assists the process, in other words, and “that act itself violates their faith,” Blomberg said.

“And then there’s what the form does,” he said, “and that is that it accomplishes a take over of the religious ministries plans.”

The government is “parasitically adding to the [Little Sisters] healthcare plan another required benefit,” he said. “It’s outsourcing [the responsibility], but it’s also insourcing it. They’re getting somebody else to come do it, but that other person can only do it once the little sister sign the document, and the place it’s all being done is in [the Little Sisters’] healthcare plan, in the healthcare delivery structure that they’ve created.”

Blomberg said an alternative would be to send employees of the Little Sisters of the Poor seeking contraceptive care straight to the government’s healthcare system, to Obamacare.

But the “government’s argument is that [they] shouldn’t have to do that,” he said, that they “should be able to use the structure of [the Little Sisters’] health plan,” and so, in essence, “you have federal judges coming in talking to Catholic nuns and basically saying, ‘You don’t understand your Catholic faith well enough. The thing that you think you can’t do, you actually can do, and it’s okay.’”

“No, no, no,” she said. “Here’s the accommodation: [the Little Sisters] have to sign a form saying that they are a religious institute and that they have religious objection to including the contraceptive coverage. That’s all they have to do. And then it’s not provided through their insurance. But what a woman can do is…can get access to it from the third party, not from the Little Sisters.”

Campbell, who is an attorney, attributed the turmoil over the ruling to “the [political] Right’s effort to scuttle the Affordable Care Act.”

“It’s yet another effort to promote a very narrow view,” she said. “And the piece that I don’t understand is how they can even think that their religious liberty trumps everybody else’s. That’s the puzzle to me. In a pluralistic society we should be about finding ways where everyone can exercise his or her conscience.”

Lisa Cahill, a moral theologian at Boston College, said the disagreement revolves around the theological concept of the “principal of cooperation.”

“Essentially this principle holds that formal cooperation with evil (ie, one intends that it happen) is never permissible,” she wrote in an email. “However, material cooperation (one supplies some means or support, but one does not want it to happen) is justified under certain conditions, such as: the evil will happen with or without one's cooperation; one acts under duress; there is a proportionate reason; and the more ‘remote’ (the less closely connected to the evil act) the cooperation is the easier it is to justify it.

“I think most would see this as a case of very remote material cooperation,” she wrote, adding that additional considerations exist relating to proportionality, like, “the good of providing national health insurance reform and more accessible services; the good of serving more women clients in multiple ways; the good of serving the poor, who will not have enhanced access to health care.”

Furthermore, “Pope Francis has said explicitly and shown by example that Catholics need to take the public focus off sex, gender, and reproductive issues, and put it elsewhere, especially on poverty,” Cahill wrote. “Going to the barricades on this issue in a public way does not seem consistent with that spirit.”

More decisions involving this disagreement will be coming down in circuit courts in the coming days, Blomberg said.

According to the National Law Journal, “The Supreme Court has several pending petitions for review filed by religious nonprofits challenging the accommodation. Priests for Life v. Department of Health & Human Services and Roman Catholic Archbishop of Washington v. Burwell are from the D.C. Circuit; Houston Baptist University v. Burwell is from the Fifth Circuit; and Zubik v. Burwell is from the Third Circuit.”

“The endgame will be at the U.S. Supreme Court,” Blomberg said.

NCR’s Washington correspondent Michael Sean Winters says the Becket Fund doesn’t understand the nuances of moral theology and he asks, “Will not someone in authority in the church tell the Little Sisters that they can fill out the form with a clear conscience?” Read the full piece here: The Becket Fund, not the Little Sisters, Lose.

A version of this story appeared in the July 31-Aug 13, 2015 print issue under the headline: Ruling against sisters latest, not last, action in Obamacare cases.