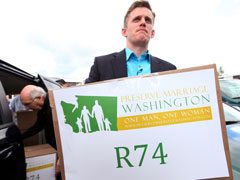 Joseph Backholm, chair of Preserve Marriage Washington, carries a box of petitions for Referendum 74 into the Secretary of State's office in Olympia on June 6. (AP/Elaine Thompson)

Whether or not Washington state citizens reject or endorse same-sex marriage at the ballot box on Nov. 6, the role that Catholics and the Catholic church will have played could provide grist for analysis and conversation for years to come.

In January, Seattle Archbishop J. Peter Sartain testified before the state legislature against the pending legislation that would make Washington the seventh state to allow same-sex marriage.
{C}
At the same time, a leading sponsor of the state Senate's version of the bill was Sen. Ed Murray, D-Seattle, openly gay and devoutly Catholic.

When the legislation passed both the House and Senate in February, it was Catholic Gov. Christine Gregoire who signed it into law.

Sartain made headlines again in April when he and Seattle Auxiliary Bishop Eusebio Elizondo issued a pastoral letter encouraging support for a referendum that would put the new law on hold and place its future in the hands of November voters. The bishops asked parishes to take part in the signature-gathering effort, but left it up to pastors to decide whether to participate. A number of parishes publicly declined, including St. James Cathedral.

Referendum 74 received well more than the 120,577 signatures required by a June deadline for it to qualify for the November ballot. The referendum language duplicates the actual law passed in Olympia, the state capital. Voters are simply asked to reject or accept it.

Yakima Bishop Joseph Tyson kicked up a dust storm and nearly ran afoul of the state Public Disclosure Commission when in August he asked the diocese's 43 parishes to encourage parishioners to contribute to Preserve Marriage Washington, the umbrella organization working to defeat Referendum 74.

Warning that actual parish collection of campaign donation envelopes would make parishes political action committees, the commission said churches could make contribution envelopes available but that parishioners would have to send them in individually or have them picked up by Preserve Marriage Washington volunteers. Tyson emphasized that the diocese would comply with state law.

The September newsletter of the Knights of Columbus Washington State Council encouraged Knights to "go to the Preserve Marriage Washington website and register as volunteers" so they could "help collect any envelopes that individuals have not chosen to mail on their own."

One group highly critical of Tyson was Catholics for Marriage Equality. It described his tactic as "divisive" and said the action "threatens to drive away Catholics who have friends, neighbors and family who are gay and lesbian."

On Sept. 6 the state's four bishops issued another joint statement on the issue, titled "Marriage and the Good of Society: A Pastoral Statement Regarding Referendum 74." The statement said:

The statement also argued that "the legal separation of marriage from procreation would have a chilling effect on religious liberty and the right of conscience."

"Once marriage is redefined as a genderless contract, it will become legally discriminatory for public and private institutions such as schools to promote the unique value of children being raised by their biological mothers and fathers. No institution or individual could propose that married mothers and fathers provide a singular benefit to children without being accused of discrimination."

Referendum 74 backers have reportedly schedule more than $5 million in TV advertising time. The cause for same-sex marriage has generated significant corporate support. Jeff Bezos, the billionaire founder of Amazon.com, and his wife, MacKenzie, pledged $2.5 million to the campaign. Other high-profile corporate donors include Microsoft, Starbucks, Nike, Vulcan, Google and Alcoa.