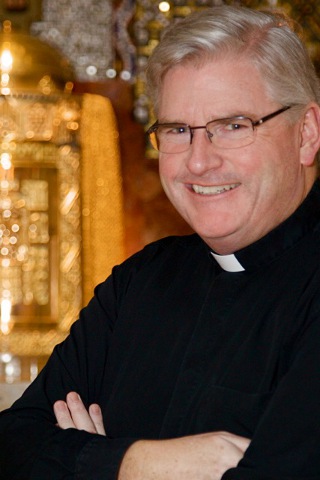 The pastor of Seattle's St. Joseph Parish has urged his parishioners to evaluate Seattle Archbishop J. Peter Sartain's call for defeat of a same-sex marriage referendum next month in light of the "call of conscience" and underscored that "authority never supplants conscience."

Jesuit Fr. John D. Whitney's Sept. 24 "e-blast" to parishioners specifically refers to a column by Sartain carried in the Sept. 13 archdiocesan newspaper. Whitney asked parishioners to review the narrative dispassionately and ask themselves "if this referendum refers to the same object as does the Church's understanding -- that is, is the civil marriage to which the referendum is addressed, the same as the sacramental marriage described by the column?"

In that column, Sartain wrote, "Suffice it to say, that should marriage be redefined in our state, the very foundational nature of marriage for the good and strength of human society would be harmed beyond repair." It was requested that copies of the column be carried in parish bulletins. Some parishes also have video clips of the archbishop speaking about Referendum on their websites.

If Referendum 74 is passed Nov. 6 in Washington state, the marriage equality law passed by the state legislature in February would take effect.

The state's four Catholic bishops and the Washington State Catholic Conference were high-profile supporters of securing signatures for the referendum to qualify for the ballot and have been outspoken in efforts to defeat it next month. The referendum language duplicates the earlier legislation itself. Voters may accept or reject it.

Asking Catholic voters to reject it, Sartain's recent column repeated that he and fellow bishops' opposition to same-sex marriage "is not 'against' anything, and especially not 'against' anyone."

"I join with all the Catholic bishops of Washington in saying that as teachers and Church leaders, we reaffirm the need to recognize and defend the rights of all people. We sincerely regret the unjust discrimination, bigotry and even violence that many people with same-sex attraction have experienced for many years," Sartain wrote.

However, the archbishop wrote that "marriage cannot be redefined," that it is "the foundation of all human society" which "must be protected, nurtured and held as sacred by us all."

"By redefining marriage as a mere contract between two persons, the new Washington State law would legalize marriage between couples of the same sex. In effect, this new law is saying that the loving, permanent and faithful union of a man and woman in marriage, the unique pattern of spousal and family love, and the generation of new life are only of relative importance rather than being fundamental to the existence and well-being of society as a whole," Sartain wrote.

In Whitney's commentary, titled "Conscience and Referendum 74," he said Catholics are "morally obliged to form our consciences well, through study and through practice" and that "a person acts morally only when following his or her conscience, despite the sometimes opposite calls of public pressure, self-interest, fashion or authority."

"That being said," he continued, "it may appear from the outside that Catholics are governed more by authority than by conscience. ... The role of authority in Catholic conscience formation is, indeed, complex; but, authority never supplants conscience."

The "call of conscience" is "the Catholic categorical imperative," Whitney wrote.

Whitney said Catholics "must take the teaching of the Church seriously" and "accept that those whose ministry is to lead the Church in the world are graced for that mission, just as every Christian is given the grace to live out her or his mission as a baptized person."

"But," the pastor added, "we know such grace is not a guarantee of infallibility, and -- as the story of Galileo makes clear -- the grace of the Church, interpreted through individuals, is still subject to the deeper truths planted in Creation. No matter how great the authority of the Church official, the order of Nature -- the rising of tides, the movement of the stars, the operations of DNA -- does not change by human dictate. Indeed, God's guarantee of grace, given to the Church and to those in authority, is not an answer-key for all kinds of judgments, just a promise that our failure to judge wisely will not be irredeemable."

In an email response to NCR, Whitney said, "I very much do not want to make this about a clash of the archbishop and me. To me, this is not about persons but about visions of the Church. I truly believe that the movement of the Holy Spirit among the People of God can only work if people receive the tools to responsibly decide issues of public policy and personal morality."

"I know there are people in the archdiocese ... who believe I am sowing seeds of discord and would prefer to have me out of town, but I have heard nothing of that nature from the archbishop's office," he said.

Whitney said parish feedback has been "mostly positive" on his reflection and on "all that we have done around Referendum 74."

"Although some disagree with my own position -- which I keep out of parish publications and out of the pulpit out of respect for the people and the archbishop -- they appreciate the call to thoughtfulness and, I think, object to the strong push coming from the Washington State Catholic Conference."

"Yet, the most important experiences have been beyond the parish," he added. "This week I received two messages, one from a woman in her late 60s who had been married for over 40 years. She lives in Olympia and has been struggling with the message she gets in her parish, and she wrote to tell me that my essay gave her hope for herself and the Church.

"The other message was also from an older woman who said that the issue had driven a wedge in their family, until they read my article and found a way to talk to each other. This is why it is so important, not that people vote my way, but that people are told they can be good Catholics and discern various responses. The absence of this teaching is the greatest tragedy in the Church's current course, I think."

Whitney said he sent a copy of "Conscience and Referendum 74" to his provincial superior "since I know that even though it is not opposing the archbishop, some will read the call to conscience as opposition." Jesuit Fr. Patrick J. Lee, head of the Jesuits' Oregon Province (Alaska, Idaho, Montana, Oregon and Washington), "fully supported its publication," Whitney said.

"Between Referendum 74 and the intervention in the (Leadership Conference of Women Religious), the Catholic community in Seattle has been severely hurt, in my experience," Whitney told NCR. "It has not just exposed polarities, but it has made people feel -- with incredible power -- how little their voices or their prayers matter in the deliberations of the Church leadership in the United States and in Rome."

LCWR has been in headlines since April, when the Vatican Congregation for the Doctrine of the Faith issued a "doctrinal assessment" of the organization which charged that the "current doctrinal and pastoral situation of LCWR is grave and a matter of serious concern."

As its point man to provide "review, guidance and approval, where necessary, of the work" of LCWR, the doctrinal congregation appointed Sartain to be assisted by Bishop Leonard P. Blair of Toledo, Ohio, and Bishop Thomas J. Paprocki of Springfield, Ill.

Also in April, Whitney was among archdiocesan pastors who declined to allow signature-gathering efforts on his parish campus for Referendum 74 after Sartain had appealed to parishes to do so. Sartain had left the decision to seek signatures to pastors.

In his commentary, Whitney asks, "Is the overlap or similarity between the two senses of marriage enough to make the change in one a challenge to the other? Likewise, one might ask how the Divine ordering of Creation in marriage and family life intersects with the Catholic principles of social justice, which call us to treat persons the same in matters of civil rights? This might be especially interesting since it was these very principles of Catholic social teaching that the author of the original bill cited in his support of the original bill's passage?"

The major sponsor of the same-sex marriage bill in the state senate was Sen. Ed. Murray, D-Seattle, reported to be a devout Catholic. Washington Gov. Christine Gregoire, who supported and signed the law, is also Catholic.

In other Referendum 74 activity, the state's Catholics for Marriage Equality, which supports same-sex marriage, announced it has begun "distributing flyers to counter the bulletin inserts prepared by the bishops" and accused the state's bishops of "promoting fear and division ... rather than proclaiming Gospel values."

[Dan Morris-Young is an NCR west coast correspondent. His email address is dmyoung@ncronline.org.]