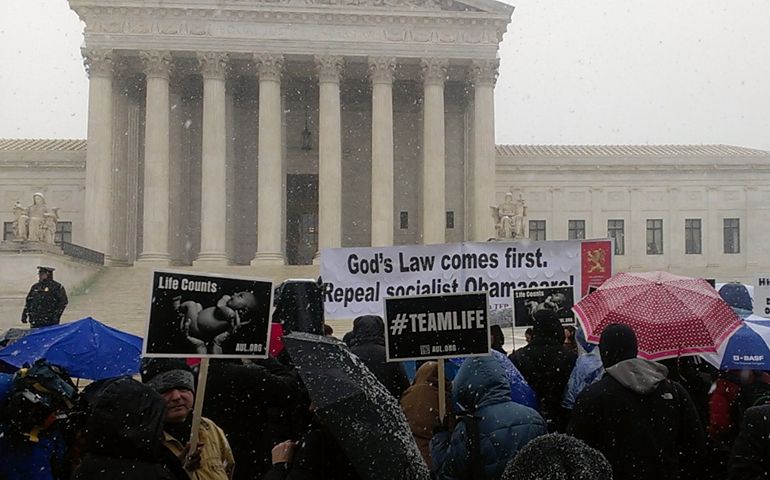 Washington — As the nine justices of the U.S. Supreme Court -- six of whom identify as Catholic -- heard arguments Tuesday on whether to strike down a federal mandate requiring coverage of contraceptive services in health care plans, activists outside weren't exactly shy in stating their views.

Portioned off into two separate sections outside the court building amid light snow, the activists evinced the sharp separations between Americans on services like abortion and birth control and on sometimes lofty concepts like religious freedom.

Leading a prayer for the group opposing the federal mandate, for example, one man referred to the Old Testament story showing God's wrath toward the unrighteous, asking that God "find 50 righteous men in this Sodom and in this Gomorrah" and "withhold your judgment of our nation."

On the other side, a registered nurse who said she worked for clinics in the D.C. area said she was simply arguing for services her patients needed.

"Some of my patients have needed ... birth control to manage a variety of medical conditions," such as endometriosis, painful periods, ovarian cysts -- "the list goes on," Emma Sloshta said.

"No matter why the women I see want contraceptives, they should be free to access them without interference from their employer," Sloshta continued.

The activists were protesting Tuesday as the Supreme Court justices heard arguments from two corporations that have challenged a mandate from the Department of Health and Human Services requiring employers to provide comprehensive insurance coverage for contraceptive services.

The separate cases -- one brought by Hobby Lobby and the other by Conestoga Wood Specialties -- deal specifically with the impact of the mandate on for-profit corporations and not houses of worship or religious institutions that can either seek exemptions or accommodations from the law.

The corporations' attorneys have argued that the mandate violates their religious freedom rights by forcing them to cover birth control or face steep fines.

The transcript of the questioning inside the courtroom Tuesday portrays the Supreme Court justices as sharply divided on the cases. Many expect Justice Anthony Kennedy to be the swing vote in determining the outcome.

According to the transcript, questioning of the corporations' cause started very quickly, with Justice Sonia Sotomayor interrupting Hobby Lobby's lawyer, former Solicitor General Paul D. Clement, almost immediately after he began his arguments.

Sotomayor, along with Justice Elena Kagan, led questioning towards the corporations, asking whether granting them religious rights in this circumstance would lead to a need to also grant rights to companies who would choose to refuse coverage of other procedures, like blood transfusions and vaccines.

Clement replied that there would not be a "parade of horribles" if the justices found in favor of the corporations, saying for example that no company has challenged a minimum wage law based on religious views. He said other instances like vaccines would require separate analysis of whether laws on those issues place a "substantial burden on religious exercise."

Signs held by the activists outside the court Tuesday illustrated the divides among Americans on the case. One in favor of the law read: "Sex is beautiful, reproduction is optional."

That group, based in Pennsylvania, claims in a leaflet that each of the U.S. Catholic bishops have "strongly denounced" the healthcare mandate and asks Catholics to "fight back, not apostatize."

Hobby Lobby, which has more than 13,000 full-time employees, claims that noncompliance with the health care mandate could cost it up to $1.3 million a day. The Supreme Court took up its case after the United States Court of Appeals for the 10th Circuit in Denver ruled in its favor last June.

The majority in that court, five of eight judges, found that the corporation should be afforded First Amendment protection of exercise of religion because of the controversial 2010 Supreme Court decision in Citizens United, which said corporations have a First Amendment right to free speech.

Writing for the majority, Judge Timothy Tymkovich said: "We see no reason the Supreme Court would recognize constitutional protection for a corporation's political expression but not its religious expression."

The Supreme Court is expected to issue a decision in the Hobby Lobby and Conestoga Wood cases by late June or early July.

The U.S. bishops' conference has continuously opposed the federal mandate, claiming that even its accommodations and exemptions for religious groups do not go far enough. The bishops issued their latest statement on the matter in November following their annual assembly in Baltimore.

That statement backed the fight of the corporations, saying the mandate "compels our faithful people in business to act against our teachings, failing to provide them any exemption at all."

The Catholic Health Association, made up of more than 600 hospitals and 1,400 long-term care and other health facilities in all 50 states and the District of Columbia, has said, however, that it can live with the mandate.

The final version of the mandate, announced last June, "established an accommodation that will allow our ministries to continue offering health insurance plans for their employees as they have always done," said Daughter of Charity Sr. Carol Keehan, the association's president, in a memorandum last July.

What is the future of our health care?