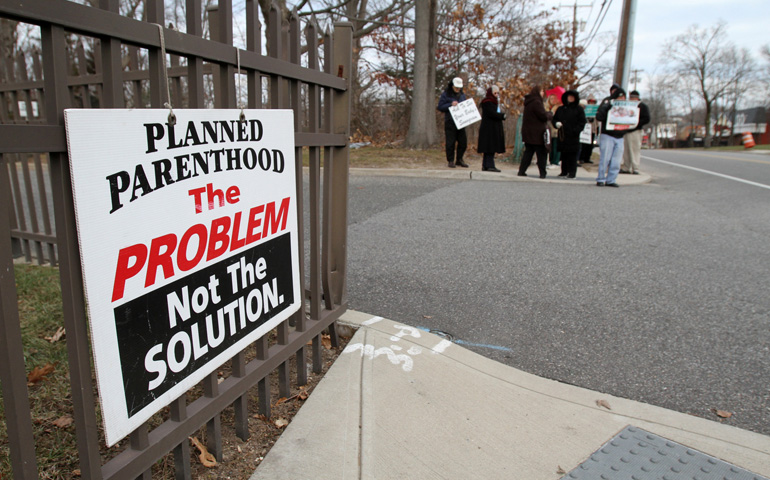 Pro-life advocates participate in a prayer vigil in January near the entrance to a Planned Parenthood clinic in Smithtown, N.Y., that performs abortions. (CNS/Gregory A. Shemitz)

An Associated Press survey of abortion in the United States this decade showed that the number of abortions has gone down by 12 percent since 2010.

"It's important to realize, first of all, that the factors accounting for this are multiple, complex and often hard to measure," said a statement Sunday from Fr. Frank Pavone, the national director and chairman of Priests for Life, based in Staten Island, N.Y.

But, Pavone added, "The primary reason well may be the abortion industry itself," which he said "has been imploding for years."

One factor cited by AP in its survey was the continuing decline in the rate of teen pregnancy. While no new numbers have been issued since those for 2010, the 2010 figures were the "lowest level in decades," according to AP.

"For so many women on both sides of the debate, there is lingering physical and psychological damage, on top of regret and heartbreak," said Janet Morana, co-founder of the Silent No More Awareness Campaign, which invites women to speak publicly about their abortions. "Women are listening, and they are choosing life," she added.

Elizabeth Nash, a state-issues expert for the Guttmacher Institute, a research group that supports legal abortion, told AP the 31 states had enacted 267 different abortion restrictions ranging from admitting-privilege requirements for abortion doctors at nearby hospitals, to bans on abortion after 20 weeks of pregnancy to building standards for abortion facilities. Some of the restrictions have been blocked by the courts, but since 2011, 70 abortion clinics have been closed in 12 states.

In only two states studied by AP did abortion rates significantly rise: Michigan, up 18.5 percent, and Louisiana, up 12 percent. Although both states have passed laws restricting abortions -- and a dozen clinics have closed in Michigan -- both border other states that had enacted their restrictive laws earlier. Michigan reported a near-doubling in the number of out-of-state women coming to Michigan to get an abortion.

"There's an entire generation of women who saw a sonogram as their first baby picture," she said. "There's an increased awareness of the humanity of the baby before it is born."

The possibility exists that access to contraceptives can account for some of the lower numbers of abortions. Planned Parenthood, which provides more abortions in the United States than anyone else, told AP its health centers reported a 91 percent increase since 2009 in the use of intrauterine devices and contraceptive implants.

AP gathered data from the 45 states that compile abortion data on a comprehensive basis. In 44 of those states, the last year such data was available was for either 2013 or 2014.