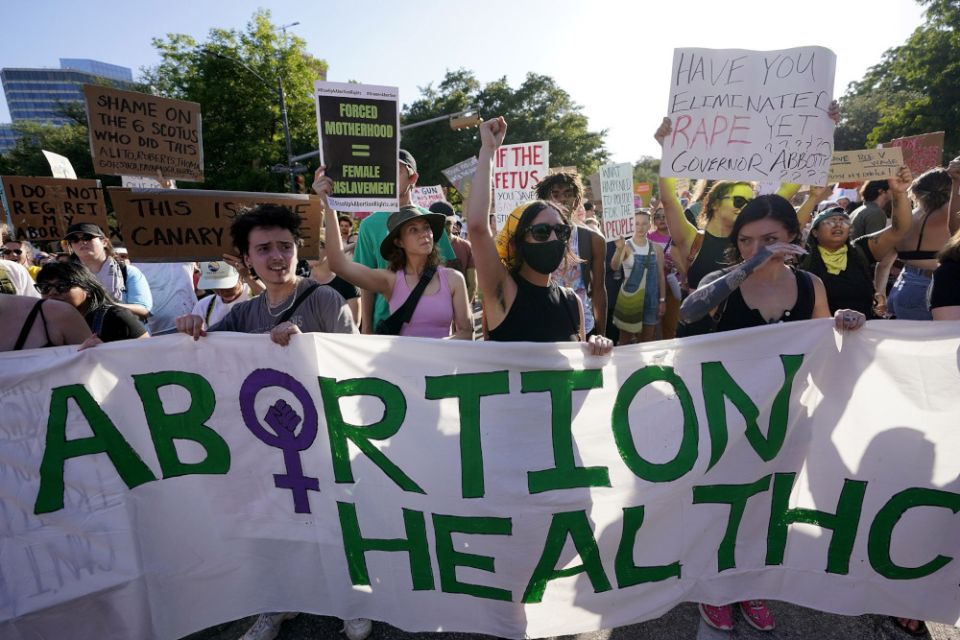 Demonstrators march and gather near the Texas state Capitol in Austin after the Supreme Court’s decision to overturn Roe v. Wade on June 24, 2022. A federal judge in Texas issued a ruling on Aug. 23, 2022, temporarily blocking the federal government from enforcing guidance against the state that requires hospitals to provide abortion services if the life of the mother is at risk. (AP Photo/Eric Gay, File)

At issue in the case, State of Texas v. Xavier Becerra, was a guidance sent to health care providers on July 11 by Xavier Becerra, the secretary of the U.S. Department of Health and Human Services. It stated that the Emergency Medical Treatment and Active Labor Act, a 1986 law that mandates doctors to provide emergency health care to the poor, requires physicians to provide abortions even when such actions may violate state law.

“Emergency medical conditions involving pregnant patients may include, but are not limited to, ectopic pregnancy, complications of pregnancy loss, or emergent hypertensive disorders, such as preeclampsia with severe features,” the guidance reads. “Any state laws or mandates that employ a more restrictive definition of an emergency medical condition are preempted by the EMTALA statute.”

But in issuing the Aug. 23 preliminary injunction, U.S. District Judge James Wesley Hendrix disagreed and ruled the HHS guidance cannot be enforced within Texas or against members of two organizations who claim religious and conscientious objections to performing abortions.

“Here, the Court finds that there is a substantial likelihood that HHS issued the Guidance unlawfully,” said Hendrix, of the U.S. District Court of the Northern District of Texas. “So Texas’s sovereign interest in the continued enforcement of its abortion laws weighs heavily.”

In his 67-page opinion, the judge also questioned the breadth of the guidance, saying its lack of exceptions for health care providers “with genuinely held religious objections to abortions” may run afoul of the Religious Freedom Restoration Act.

The case, the judge noted, raises one of many “novel questions about the interplay of federal and state law” that have arisen in the wake of the Supreme Court’s June decision on Dobbs v. Jackson Women’s Health Organization.

Although Texas sought a nationwide injunction on the guidance, the judge — who noted similar issues are being argued before an Idaho court — limited his opinion to the state of Texas and to members of two organizations who had faith-related objections.

Alliance Defending Freedom, which represented the American Association of Pro-Life Obstetricians and Gynecologists and the Christian Medical and Dental Associations, welcomed the court ruling.

“Elective abortion is not life-saving care — it ends the life of the unborn — and the government can’t force doctors to perform procedures that violate their conscience and religious beliefs.”

White House press secretary Karine Jean-Pierre said, in reaction to the decision, that President Joe Biden would continue to advocate for women in need of emergency reproductive services.

“Because of this decision, women in Texas may now be denied this vital care — even for conditions like severe hemorrhaging or life-threatening hypertension,” she said in a statement. “It’s wrong, it’s backwards, and women may die as a result.”

Hendrix, who was appointed judge by President Donald Trump in 2019, ruled that the July 11 guidance by Becerra was “unauthorized,” in part because the EMTALA statute is silent about abortion and the guidance “cannot answer how doctors should weigh risks to both a mother and an unborn child.”

He added that HHS issued the guidance without offering an opportunity for public comment, which was required due to provisions of the Medicare Act.

The judge also cited “concrete financial harms”: the guidance’s threat of civil penalties and exclusions from health care programs such as Medicare.

“Only setting aside the Guidance until proper notice-and-comment procedures are followed or an injunction against its enforcement will protect the plaintiffs’ procedural rights,” he wrote.

The judge said HHS argued that the injunction, now preliminarily in place, “would increase the risk that pregnant women would be denied abortions to preserve their health and lives.”

But, he said, “Texas law already contains exceptions for abortions in life-threatening circumstances presenting a risk of death or a serious risk of substantial impairment of a major bodily function.”

The judge said that in instances where HHS guidance requires abortion and Texas does not, the state law offers “the best opportunity for the unborn child to survive.” The Supreme Court, in Dobbs and previous cases, “has affirmed that states have a genuine interest in protecting the life of the unborn child,” he added.