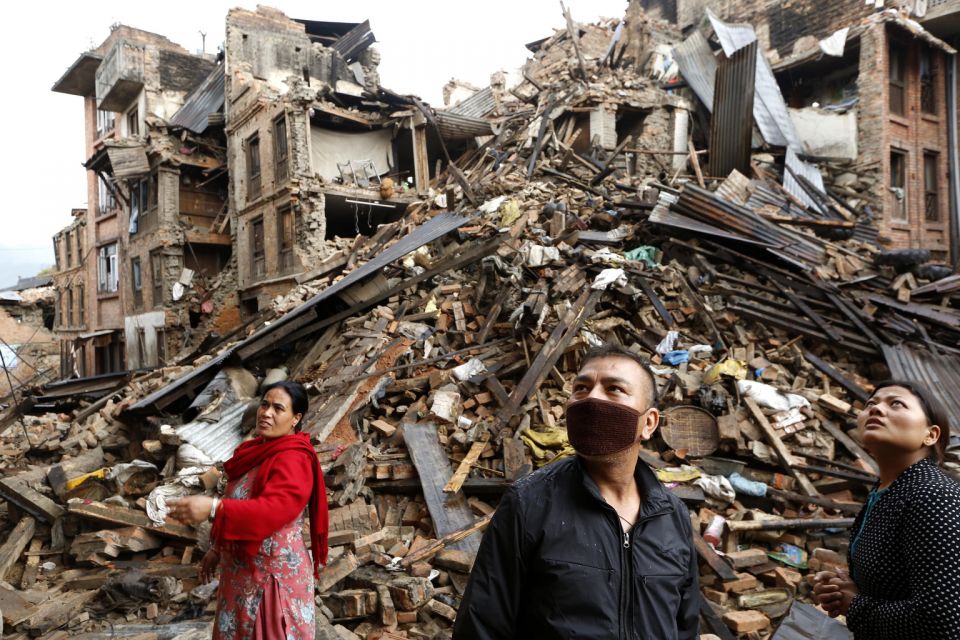 Survivors look at destroyed buildings following an earthquake in Bhaktapur, Nepal. More than 3,600 people were known to have been killed after a magnitude-7.8 earthquake hit near Kathmandu on April 25, 2015. (CNS photo/Abir Abdullah, EPA)

Nearly 9,000 Nepali immigrants living in the U.S. will lose their temporary protected status (TPS) after the Trump administration determined that the country has sufficiently recovered from a 2015 earthquake to accept their return.

Aside from the deaths and injuries caused by the earthquake, said Lisa Parisio, an advocacy attorney for the Catholic Legal Immigration Network (CLINIC), Nepal has not yet recovered from "massive damage to public and private infrastructure across the country," including homes, health care facilities, schools, roads, sanitation and water purification infrastructure.

"All of this has resulted in a situation that remains in Nepal today where the country is absolutely in no shape to safely return the 9,000 TPS holders," Parisio said.

"The Secretary determined that the disruption of living conditions in Nepal from the April 2015 earthquake and subsequent aftershocks that served as the basis for its TPS designation have decreased to a degree that they should no longer be regarded as substantial, and Nepal can now adequately manage the return of its nationals," the statement said.

The termination will be delayed for a year after the status' original expiration date, meaning Nepali status holders have until June 24, 2019, to leave the country or seek another legal status.

A March report from CLINIC urging Nielsen to extend temporary protected status had said that earthquake recovery efforts were hampered by bureaucratic issues, civil unrest and blockades, leading the U.S. government to note during the last status extension 18 months ago that the start of major reconstruction had yet to even begin.

Status holders in the U.S. are often supporting several family members in Nepal. In some of the most devastated areas, about 15 percent of Nepalis rely on remittances from people in the U.S., said Parisio. Expelling TPS holders who support Nepali family members could have a "mushrooming impact" and further destabilize those areas.

The CLNIC report also noted that other natural disasters, such as floods and landslides, have further impeded recovery and that the Global Report on Internal Displacement estimates that 2.6 million of the 2.8 million originally displaced by the earthquake are still living in temporary shelters.

"In our report we made what we feel to be a very clear legal argument that the Secretary of Homeland Security is really compelled to extend temporary protected status for Nepal based on the fact that the country has really barely begun to recover from the 2015 earthquake," Parisio said.

Temporary protected status grants work permits and protection from deportation to immigrants without criminal records from specific countries that are designated due to natural disasters, armed conflict or other extraordinary and temporary conditions that make it too dangerous to return. By law DHS is required to extend protected status in 6, 12 or 18 month increments for as long as the department determines dangerous conditions persist.

At the start of the Trump administration, over 300,000 immigrants were covered by TPS. Over 250,000 will soon lose their protection when grace periods end after the termination of protected status for El Salvador, Haiti, Nicaragua, Sudan and now Nepal. A similar program, Deferred Enforced Departure, was also ended for around 4,000 Liberians in March.

With each termination, advocates have noted that DHS is interpreting the relevant law more narrowly than previous Democratic and Republican administrations, which typically took into account factors that were not closely related to the original reason for designation — such as subsequent natural disasters or homicide rates — that could make the country too dangerous to accept returns.

However, this does not explain the decision for Nepal, where advocates' primary concern actually is the lack of recovery from the disaster that originally promoted the designation.

"What we're seeing here is clearly just a politicization of TPS," Parisio said. "The administration's position is clear; it's attempting to eradicate TPS for currently holding countries. … We find that unjustifiable given the conditions that are in Nepal today and that people cannot be safely returned."

The administration did grant 18-month extensions of the status to about 70 immigrants from South Sudan and about 7,000 from Syria; both countries are experiencing armed conflict. Decisions for Somalia and Yemen are expected in September, and a decision for Honduras will come in just a few days.

Six months ago, under then-acting DHS secretary Elaine Duke, the department made the unusual move of declining to reach a decision on Honduras, a course of action some suggested resulted from the tension between conditions that warranted an extension and pressure from inside the administration to terminate the status.

This led to an automatic six-month extension for Honduras' status, which will expire July 5. Nielsen must decide whether or not to further extend the status for nearly 60,000 Hondurans by May 4.

While Honduras was originally designated in 1999 because of a hurricane, the country's extremely high rates of homicide and gang violence are the most pressing concerns for many Honduran immigrants.

The termination of the status for Nepal has only increased advocates' concerns that Honduras will be next, said Parisio.

"Like Nepal, Honduras is in no way, shape or form able to safely reabsorb the TPS holders," she said. "… From CLINIC's perspective this country should also be considered for redesignation for the violence and homicide rate and gang violence that's going on in Honduras today."

CLINIC is encouraging anyone who is losing protected status to get a legal screening to check if they might have another pathway to legal status, Parisio said, while also advocating for a legislative solution to more permanently protect TPS holders.

"These people have been in this country for many years, in many cases, and are just trying to get by and support their families," she said.