Trump's religious liberty order slammed as 'pretty much nothing' 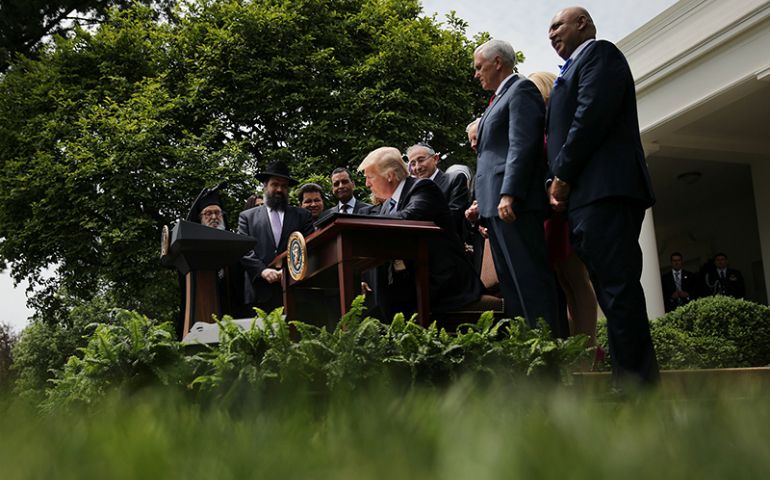 President Trump signs an Executive Order on Promoting Free Speech and Religious Liberty during the National Day of Prayer event at the Rose Garden of the White House in Washington, D.C., on May 4, 2017. (Reuters/Carlos Barria)

Washington — President Trump signed a highly anticipated executive order on religious liberty at a sun-splashed Rose Garden ceremony on the National Day of Prayer on May 4, basking in the praise of religious leaders who blessed his action as an answer to their prayers.

"It was looking like you'd never get here, folks. But you got here!" a triumphant Trump told the gathering after a series of invocations from Baptist and Catholic leaders, and from Paula White, the prosperity gospel televangelist who is one of Trump's main religious advisers.

Yet even before the carefully orchestrated event was over, Trump's grand gesture toward his religious base appeared to falter as a matter of policy, and perhaps as politics: Social conservatives who had been expecting much more, and much sooner, expressed sharp disappointment, and the order itself seems unlikely to have much real impact on current laws and regulations.

"[C]onstitutionally dubious, dangerously misleading, and ultimately harmful to the very cause that it purports to protect," David French wrote in a blistering analysis in National Review. "In fact, he should tear it up, not start over, and do the actual real statutory and regulatory work that truly protects religious liberty."

"Woefully inadequate," wrote Ryan Anderson of the conservative Heritage Foundation and a prominent commentator on religious liberty issues. The order, he added in a tweet, shows that Trump "either wasn't listening or doesn't care. Or simply caved to Left's bullying."

Douglas Laycock, a law professor at the University of Virginia School of Law and an expert on religious freedom issues who is respected across the political spectrum, was also unimpressed.

"This is pretty much nothing," Laycock wrote in an email.

The two-page executive order has three main points, according to a summary that the White House released to reporters:

More important, they said, the order has no exemptions for religious groups or businesses that object to LGBT anti-discrimination laws — a priority for Christian conservatives — so it provides no relief to bakers or florists, for example, who refuse to provide services for gay couples.

Trump's order also does not go nearly as far as a draft executive order that had circulated shortly after Trump was inaugurated in January and that had raised the hopes of religious conservatives growing anxious that Trump would not make good on his promise to address religious liberty.

Moreover, the new order itself is carefully hedged in its language on the two points of policy that it addresses, the contraception mandate and the Johnson Amendment.

For example, it asks the secretary of Health and Human Services "consider" issuing regulations to provide relief from the contraception mandate and says it must be done within the constraints of "applicable law" — that law currently being the health care law passed under President Obama.

So the order itself doesn't really do anything to the mandate and it appears to mean that much would depend on the outcome of the other major Washington story on Thursday, the House's close vote to repeal and replace Obamacare – a vote that might not be repeated in the Senate.

The same is true for the language regarding the Johnson Amendment.

"All executive departments and agencies shall, to the greatest extent practicable and to the extent permitted by law, respect and protect the freedom of persons and organizations to engage in religious and political speech," the executive order says.

At the Rose Garden ceremony, Trump painted a picture — as he has in the past — of religious believers facing virtual state-sponsored oppression under his predecessor thanks to the Johnson Amendment and other laws, saying that any pastor who spoke about "issues of public or political importance" was threatened with devastating financial consequences.

"For too long the federal government has used the power of the state as a weapon against people of faith, bullying and even punishing Americans for following their religious beliefs," Trump declared. "No one should be censoring sermons or targeting pastors," he said, adding: "We are giving our churches their voices back."

In reality, the IRS has only investigated houses of worship for political speech a handful of times. And in the past 60 years only one church has lost its tax exemption for politicking.

Congregations ranging from liberal African-American churches to conservative Catholic parishes have routinely spoken out on political issues and pastors have openly endorsed candidates without fear of retribution from the IRS or any other federal agency.

As Laycock noted, the order's language on the Johnson Amendment "does not say that churches should be allowed to endorse candidates. It says only that they should not be found guilty of implied endorsements on facts where secular organizations would not be. I have heard no stories of that happening."

Also, surveys show that an overwhelming majority of Americans – about 8 in 10 – do not want houses of worship engaging in partisan political campaigning and opposition to such electioneering is even higher among clergy themselves.

"For the record, I have no interest in endorsing candidates from the pulpit," tweeted Denny Burk, a pastor in Louisville, Ky., and a professor at Southern Baptist Theological Seminary. "And I would be wary of any preacher that does."

In short, few believe the Johnson Amendment is much of a problem and many of those who do don't think Trump's executive order is much of a solution.

As Laycock said, this all "may lead to good things for believers down the road, but it does nothing immediately."

And with the ACLU vowing to file suit against Trump over the executive order, "down the road" might likely mean "see you in court" before the country sees any substantive changes in religious liberty policies.

Politics | Trump's religious liberty order slammed as 'pretty much nothing'