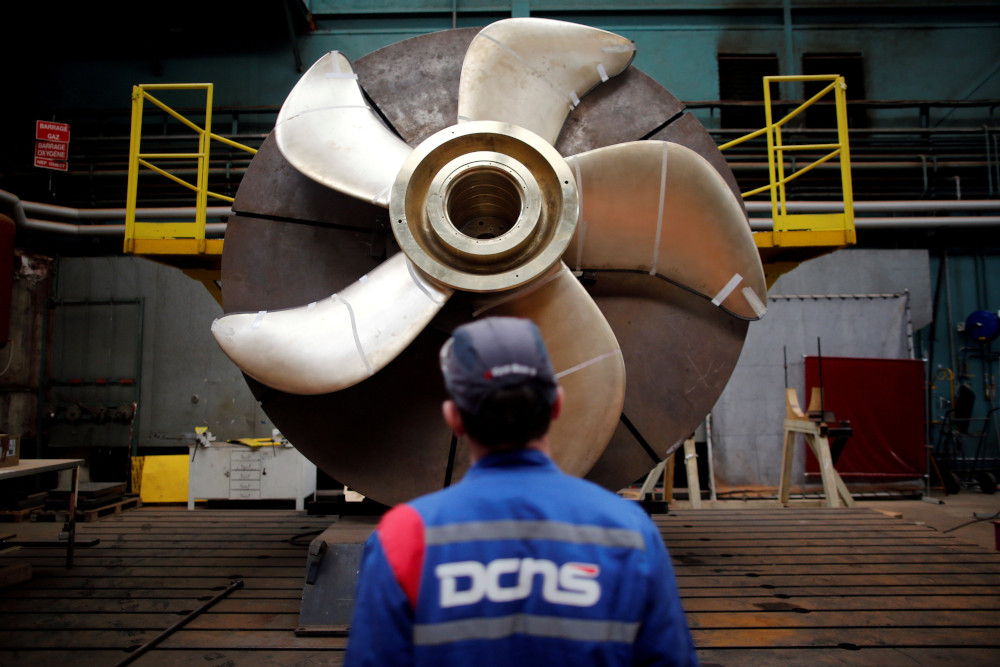 An employee looks at the propeller of a Scorpene submarine at the industrial site of the naval defense company and shipbuilder, DCNS, in La Montagne near Nantes, France, April 26, 2016. (CNS photo/Stephane Mahe, Reuters)

"The Holy See is against rearmament," he told reporters Sept. 22. "Efforts have been and are being made to eliminate nuclear weapons because they are not the way to maintain peace and security in the world, but they create even more danger for peace and conflict."

"One cannot but be concerned" by the announcement made in mid-September by U.S. President Joe Biden, British Prime Minister Boris Johnson and Australian Prime Minister Scott Morrison, the cardinal said.

Parolin, Cardinal Jean-Claude Hollerich of Luxembourg, president of the Commission of Bishops' Conferences of the European Union and Cardinal Peter Turkson, president of the Dicastery for Promoting Integral Human Development, were speaking Sept. 22 at a conference on "Christian Values and the Future of Europe" sponsored by the European People's Party.

Asked about participating in an event sponsored by a political party, the cardinal said that many members of the party describe themselves and their agendas as Christian, therefore it is important that church representatives have a chance to explain what they see as pressing issues and responsible solutions.

It is not like "going to the supermarket and taking this and that," the cardinal said. Such selection risks manipulating religion "for political purposes."

Reporters also asked Parolin about comments Pope Francis made to Jesuits during his trip to Slovakia; according to a transcript released Sept. 21 by Civilta Cattolica, the pope said that some people had hoped he would die this summer when he underwent colon surgery.

And, the pope continued, "I know there were even meetings between prelates who thought the pope's condition was more serious than the official version. They were preparing for the conclave."

"Honestly," Parolin said, "I have not felt that there was this climate," although someone seems to have told the pope there was.