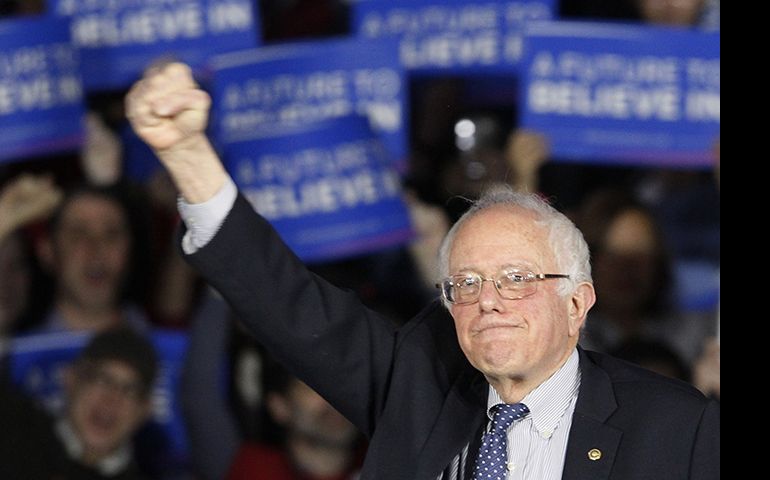 U.S. Catholics who identify as traditional or conservative sometimes fail to understand the church’s teachings on social justice and their duty to the poor.

That is why it was so heartening to see Fr. Dwight Longenecker make this point on his traditional and popular blog:

No economic system is perfect and no single economic system can be said to be "Catholic," but it would not be inconsistent for a Catholic to vote for a Democratic Socialist. Indeed, the reason so many Catholics voted for the Democratic Party over the years was because they perceived the Democrats to be the party of the poor, the marginalized, the workers and the "little guy."

So far so good. It is Catholic doctrine that wealth exists to be shared; private property is under a social mortgage for the common good; workers must be paid a living wage; health care is a human right, and we must be on the side of the poor first.

For Catholics, these are non-negotiables.

But then Longenecker, a priest in South Carolina, goes on to say that faithful Catholics may not vote for Bernie Sanders. This has nothing to do with the fact that he’s Jewish [Catholics have been voting for non-Christians for centuries, particularly in majority non-Christian countries], but rather because of his position on abortion.

Citing the views of the Rev. Stephen Torraco, who wrote a voter guide for the popular Catholic television network EWTN, Longenecker says that support of abortion rights is such a grave evil that it disqualifies Sanders [who has a voting record of 100 percent with pro-choice groups] from being considered.

But this is not Catholic teaching.

Priests for Life has a helpful explanation of this reasoning from Pope Emeritus Benedict XVI, who in his previous role as the church’s doctrinal watchdog, said:

"When a Catholic does not share a candidate’s stand in favor of abortion and/or euthanasia, but votes for that candidate for other reasons, it is considered remote material cooperation [with evil], which can be permitted in the presence of proportionate reasons."

But what does it mean to have "proportionate reasons" to vote for Sanders, a man who flagrantly ignores the dignity of voiceless and helpless prenatal children -- and indeed works hard to make sure they do not receive equal protection of the law?

The U.S. Conference of Catholic Bishops explains that we voters face a dilemma when “all candidates hold a position which is intrinsically evil" -- as is the case with positions on things like abortion, torture, assisted suicide, and usury.

In such cases, the bishops appeal to voters' prudential judgement, which includes what they think of "a candidate’s commitments, character, integrity, and ability to influence a given issue."

Suppose a voter believed the following:

This is especially true when such protection requires using the federal dollars to give mothers necessary resources. It is just not clear that Republicans are actually committed to protecting prenatal child, and it is therefore not clear we should trust them.

2. Women are structurally pushed toward abortion.

The best way to save the lives of prenatal children, at least in our current political reality, is to provide women in difficult circumstances the resources to keep and support them. Right now, with no paid family leave, hopelessly expensive child care, and a massive disparity in pay, women are put in a difficult spot. Abortion rates tend to be significantly lower in countries with stronger social welfare systems.

3. Catholics must favor the poor first.

Jesus doesn’t talk about hell very often, but when he does it is almost always seen as the result of a failure to be on the side of the poor. Sanders’ commitment to the poor blows away any GOP candidate in this regard.

The U.S. bishops insist a Catholic’s voting choices "may affect the individual’s salvation." Would a person with these views have proportionate reasons for voting for Bernie Sanders?

In voting for Sanders on the basis of the above reasons, such a person is strongly affirming the need to protect prenatal children, while at the same time also giving due reverence to the other serious and non-negotiable values at stake in this election.

Other Catholics may disagree. Some believe the social welfare programs proposed by Sanders actually hurt the poor. I personally won’t be voting for Sanders because I simply can’t make myself check the box of a candidate who so flagrantly denies equal protection of the law for the most vulnerable, thus subjecting them to horrific violence.

But these disagreements are an important sign of a healthy church, one that finds both parties to be foreign territory. Let us engage these debates in the spirit of family, united by having a common brother in Jesus, and let us all bring a healthy dose of skepticism for approaches that make idols out of secular political agendas.