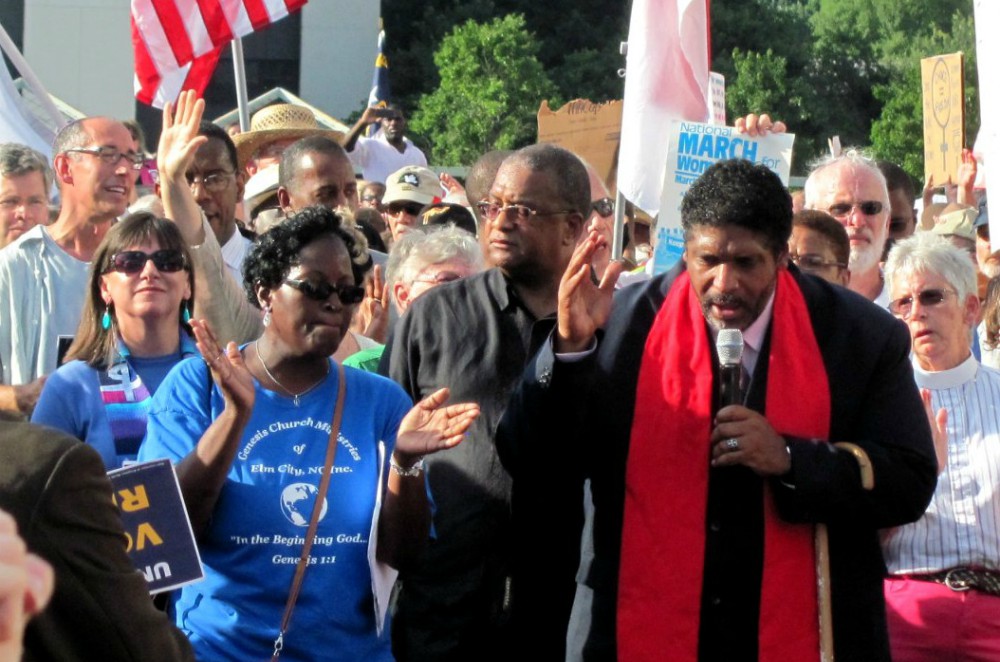 In this 2013 file photo, the Rev. William Barber speaks at a Moral Mondays rally in North Carolina. Moral Mondays actions, which originated in that state, will be a part of the newly launched "We Must Do M.O.R.E. Tour" across the U.S. The tour is organized by the Poor People's Campaign. (Wikimedia Commons/twbuckner)

The Poor People's Campaign announced Sept. 9 the launch of its nine-month tour across the United States to organize and mobilize more than 1 million low-income people in the lead-up to the 2020 election, culminating with a march on Washington in June 2020.

"This nation needs a movement — a transformative movement that will not only go to the polls but will organize in the streets and the legislative streets, particularly in the state capitals and other places," the Rev. William Barber, president of Repairers of the Breach and national co-chair of the Poor People's Campaign: A National Call for Moral Revival, said at a press conference at National City Christian Church in downtown Washington.

Organizers said that the goal of the tour, called the "We Must Do M.O.R.E. Tour," is to "build power" among the 140 million poor and low-income people across the country and shift the "moral narrative" in the U.S. that blames poor people for the country's problems. The activists want to make the injustice of poverty a top political priority heading into the 2020 election cycle.

The acronym "M.O.R.E." stands for mobilization, organization, registration and education.

Starting in El Paso, Texas, Sept. 16, leaders from the Poor People's Campaign will travel to 25 states for a series of major "Moral Mondays" actions, according to organizers. Moral Mondays originated in North Carolina and were led by Barber, who is a pastor in Goldsboro, North Carolina. The actions are a form of civil disobedience protest where activists enter the state legislature building to intentionally be peacefully arrested.

National organizers will also work with local organizers in each state to plan and prepare for what they're calling the "Mass Poor People's Assembly and Moral March on Washington," on June 20, 2020 — a date intentionally set between the end of presidential primaries and the parties' national conventions.

In his remarks, Barber said that state coordinating committees are working to connect with and train 30,000 "impacted people and moral activists in their state with a goal of mobilizing over 1 million people who are prepared to engage their communities in 2020 and beyond."

"We are coming back to demonstrate our collective power and to demand that the agenda of this campaign inform the platforms of both party's conventions ahead of the 2020 election," Barber said.

Organizers also plan on using the tour to address what they call the "five big interlocking evils and injustices" — systemic racism, systemic poverty, ecological devastation, war-based economy and religious nationalism — by humanizing the effects of poverty.

"We are going to the poorest communities in America to put a face on poverty. It's not enough to say that 43% of Americans are poor and low-wealth. We must lift up their stories. We must say their names," Barber said, inviting the press to join the tour.

The Poor People's Campaign began in 2017 as a coalition of religious and social justice organizations dedicated to challenging existing narratives about poverty and increasing awareness. The campaign launched 50 years after Martin Luther King Jr. and the Southern Christian Leadership Conference announced a campaign of the same name.

In the spring of 2018, the group launched "40 Days of Moral Action" campaign that Rev. Liz Theoharis, the Poor People's Campaign other co-chair, called "the largest and most expansive wave of nonviolent civil disobedience in the 21st century" at the press conference.

Barber emphasized that the Poor People's Campaign is led by low-income people and moral and religious leaders "who are sick and tired of being blamed for the conditions that make them sick and tired."

"Every moral movement that has successfully pushed this nation toward a more perfect union has been led by the agency of directly impacted people and their allies who organized from the ground up to shift the moral narrative so that those in power — whatever their party or political philosophy — had to address the immorality of slavery, the immorality of child labor, the immorality of denying women the vote, the immorality of racial segregation," he said.

To lend credibility to their cause and move beyond denouncing a specific ethos, organizers also pointed to work the Poor People's Campaign has done to offer solutions to raise people out of poverty. Barber mentioned two studies the campaign has published — "The Souls of Poor Folk" and "Poor People's Moral Budget" — as outlining the group's vision for change.

Theoharis noted a few specific policy proposals the campaign shared with the House Budget Committee in June, including transitioning to automatic online voter registration, enacting a $15 federal minimum wage, expanding Medicaid in the 14 states that have not yet adopted the Affordable Care Act expansion and instituting universal early learning and child care support.