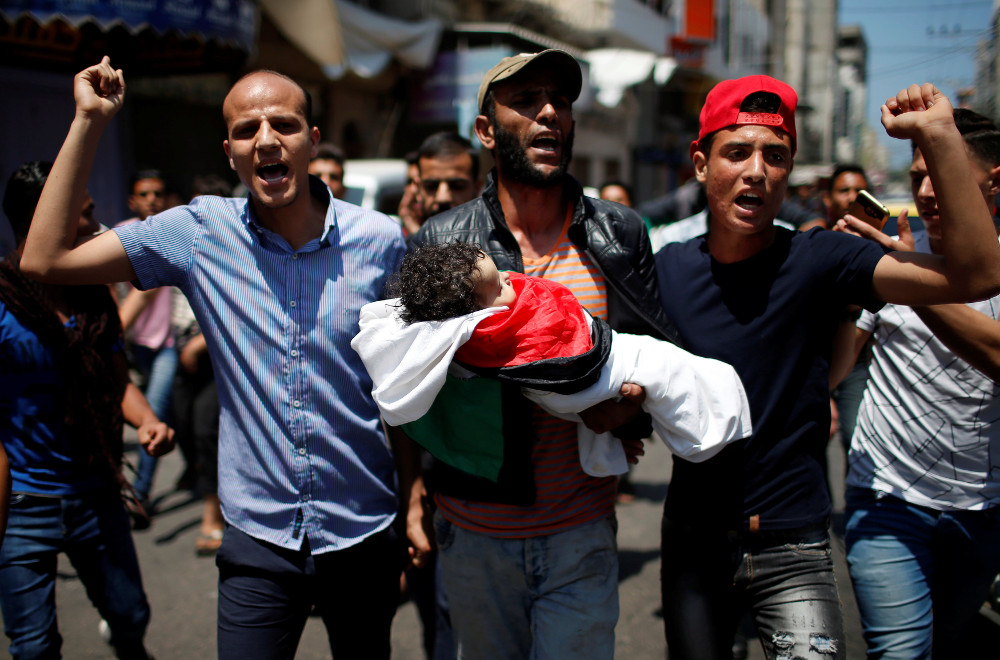 Mourners carry the body of 8-month-old Palestinian Laila al-Ghandour, who died after inhaling tear gas at the Israel-Gaza border during a May 15 protest against the U.S embassy move to Jerusalem. (CNS/Mohammed Salem, Reuters)

Warning that violence will never bring peace, Pope Francis urged all sides to do all they can to foster dialogue in the Middle East.

"I am very worried about the intensifying tensions in the Holy Land and the Middle East and about the spiral of violence that increasingly leads away from the path of peace, dialogue and negotiations," he said in an appeal May 16 during his general audience in St. Peter's Square.

The Associated Press reported that May 14, the same day the United States was inaugurating its embassy in Jerusalem, Israeli forces shot and killed 57 Palestinians and injured more than 2,700 people during mass protests along the Gaza border. In addition, a baby died from tear gas inhalation, the Gaza Health Ministry said, bringing the death toll to 58.

Expressing his sadness for those killed and injured, and prayers for all who are suffering, the pope underlined that violence is never of any use for bringing peace.

"War is called war, violence is called violence," he said.

"I invite all those involved and the international community to renew their commitment so that dialogue, justice and peace may prevail," he said, before leading the thousands of people gathered in the square in praying the "Hail Mary."

The pope then sent his good wishes to all Muslims at the start of the month of Ramadan. "May this special time of prayer and fasting help in walking the path of God, which is the path of peace," he said.

Earlier, the head of Jerusalem's Latin Patriarchate called for prayers for peace as the world witnesses "another outburst of hatred and violence, which is once again bleeding all over the Holy Land."

"We need to pray more for peace and our conversion and for all," said Archbishop Pierbattista Pizzaballa, apostolic administrator of the patriarchate, or diocese.

"The lives of so many young people have once again been shut down and hundreds of families are mourning their loved ones, dead or wounded," said the statement May 15 from Pizzaballa. "As in a kind of vicious circle, we must condemn all forms of violence, any cynical use of human lives and disproportionate violence. Once again we are forced by circumstances to plead and cry out for justice and peace!"

He announced that May 19, the eve of Pentecost, the church would hold a prayer vigil at the Church of St. Stephen at L'Ecole Biblique. He asked the entire diocese to dedicate a day of prayer and fasting for the peace of Jerusalem and that the liturgy on Pentecost be dedicated to prayer for peace.

"We must truly pray to the Spirit to change our hearts to better understand his will and to give us the strength to continue to work for justice and peace," the archbishop said.

Palestinians claim Jerusalem as their capital and now feel that, with its embassy there, the U.S. cannot be a fair broker in the peace process with Israel.

The Assembly of Catholic Ordinaries of the Holy Land, which includes Pizzaballa and bishops of the Eastern Catholic churches in the region, reiterated the Catholic Church's position that moving the U.S. embassy and "any unilateral move or decision about the Holy City of Jerusalem doesn't contribute to advancing the long-awaited peace between Israelis and Palestinians."

"We believe that there is no reason that could prevent the city from being the capital of Israel and Palestine, but this should be done through negotiation and mutual respect," said the statement from the assembly May 15.

The Catholic leaders also said the deaths and injuries along the Israeli-Gaza border "or most of them, could have been avoided if non-lethal tools had been used by the Israeli forces."

The assembly called on "all parties involved to avoid use of violence and to find ways to end siege imposed on about 2 million Palestinians in Gaza Strip as soon as possible."