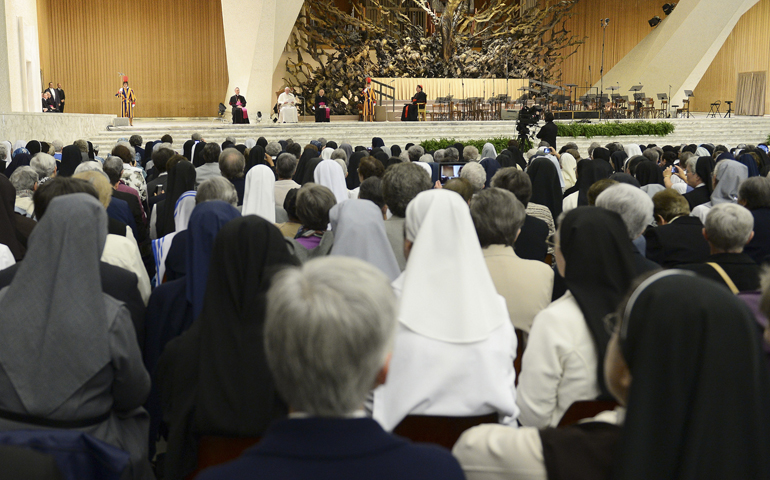 Pope Francis addresses an assembly of the International Union of Superiors General on Wednesday in Paul VI hall at the Vatican. (CNS/L'Osservatore Romano via Catholic Press Photo)

Pope Francis met Wednesday with leaders of orders of Catholic sisters and nuns from around the globe, telling them that the lives of consecrated persons are a "light in the world."

"What would the church be without you?" the pope asked at one point in the audience, telling the sisters the church "would be missing maternity, affection, tenderness" without them.

The meeting, a private audience held in the Vatican's Pope Paul VI Hall before Francis' weekly Wednesday audience in St. Peter's Square, was between the pope and approximately 800 members of the International Union of Superiors General (UISG), a membership organization of some 1,800 global leaders of congregations of women religious.

The meeting was much anticipated because leaders of the sisters' group said they could not recall the last time a pope had met with their general membership.

Francis talked for about 15 minutes, reflecting on the meaning of religious life.

The pope focused on three themes, telling the sister leaders to keep their lives centered on Christ, to think of authority in terms of service, and that they must hold a "feeling with the church that finds its filial expression in fidelity to the magisterium."

Citing Pope Paul VI, Francis said, "It is an absurd dichotomy to think of living with Jesus but without the church, of following Jesus outside of the church, of loving Jesus without loving the church."

"Feel the responsibility that you have of caring for the formation of your institutes in sound church doctrine, in love of the church and in an ecclesial spirit," the pope said.

Dominican Sr. Margaret Ormond told NCR after the pope's talk that she thought he recognized the sisters "play a part in the church too, and there's something to be learned from us."

"I thought he inserted delicately the whole thing about feeling with the teachings of the church," said Ormond, the prioress of the Ohio-based Dominican Sisters of Peace and an elected regional representative to the sisters' group from North America.

Ormond said she thought Francis' use of the word "feel" regarding obedience to the church meant the pope "got his point in, but he wasn't admonishing."

Francis' remarks Wednesday come after five days of meetings for the sisters' group, which hosted a triennial assembly May 3-7 in Rome focused on the theme of servant leadership.

Sr. Dorothy Vella-Zarb, superior general of the French-founded order of the Sisters of St. Joseph of the Apparition, said Wednesday she thought the sisters' group's meeting with the pope was necessary.

"I think it is very important to say there is something that needs to be clarified on the level between the church and religious life," said Vella-Zarb, whose order's headquarters are in Rome.

"I think it's very important to have this meeting with the pope and with the cardinal," she continued. "I think these are very important meetings to get us closer together, not to feel two parallel lines, to be the same: that we are one church, one line."

During his talk, the pope made note of the gathering's theme of servant leadership, saying the essence of power is service.

"We must never forget that true power, at whatever level, is service, which has its bright summit upon the cross," the pope said.

The pope also told the sister leaders they should put themselves in "an attitude of adoration and service."

The pope exhorted the sisters to accept the three traditional vows of consecrated life -- obedience, poverty and chastity. He called them to look for poverty that "is learned with the humble, the poor, the sick and all those who are at the existential margins of life."

"Theoretical poverty doesn't do anything," the pope continued. "Poverty is learned by touching the flesh of the poor Christ in the humble, the poor, the sick, and in children."

He also asked the sisters to accept a "fertile" chastity, one in which consecrated women are "mothers" who "generate spiritual children in the church."

The pope concluded his talk with an apostolic blessing, telling the sister leaders he was extending it "to you and to all in your institutes."

Afterward, the pope briefly greeted the president of the UISG, U.S. Franciscan Sr. Mary Lou Wirtz, and members of the organization's executive board and staff.

As the leaders processed up the steps from the floor of the hall to the stage where the pope was standing, a group of African sisters broke into song.

Sr. Josune Arregui, UISG's executive secretary, told NCR that when she greeted the pope, she told him she had been experiencing "a crisis of faith in the church" but had experienced a revival since his election as pontiff.

"He told me, 'Don't worry, I am twice a month in crisis,' " Arregui, a member of the Carmelite Sisters of Charity of Vedruna said. "I come back laughing, laughing!"

Before the pope's address Wednesday, several heads of South African orders said they were excited to work with the pope and to take his message back to their members.

"The last time we didn't have the pope address this gathering," said Sr. Cecilia Mkhonto of the Sisters of St. Brigid. "So now that he's coming and he's interested in religious life, we want to work hand in hand and be a joint witness with the whole church."

"Going back for us is being privileged, bringing the message of hope to the people," said Sr. Patricia Ntoagae of the Companions of St. Angela. "[The pope] asks us to go back ... to be simple, and therefore to be at service for others. And to be there for others, the poor especially."

Cardinal João Braz de Aviz, head of the Vatican's Congregation for Religious, who introduced the group to the pope, told NCR after the audience the group hadn't had a "word directly from the pope ... since before our time."

Francis' talk came on the heels of reporting on remarks by Braz de Aviz at the gathering Sunday, where he told the sister leaders he did not know at the time of a 2012 move by the Vatican to place the main representative group of U.S. Catholic sisters under the control of bishops.

That lack of discussion over whether to criticize the Leadership Conference of Women Religious (LCWR) caused him "much pain," Braz de Aviz said then. "We have to change this way of doing things," he told the sister leaders.

Braz de Aviz's remarks were made regarding what is known as a doctrinal assessment of LCWR, which represents about 80 percent of some 57,000 U.S. sisters.

The assessment ordered the group to revise and place itself under the authority of Seattle Archbishop J. Peter Sartain, who was given a mandate to serve as its "archbishop-delegate" for five years.

LCWR has repeatedly said the reasons cited by the Vatican for the review were not an accurate representation of their work.

While the Vatican press office issued a statement Tuesday saying recent media reports inaccurately reported the cardinal's remarks by indicating a split between the congregations, Braz Aviz told NCR Wednesday that its reporting on the matter was "very precise."