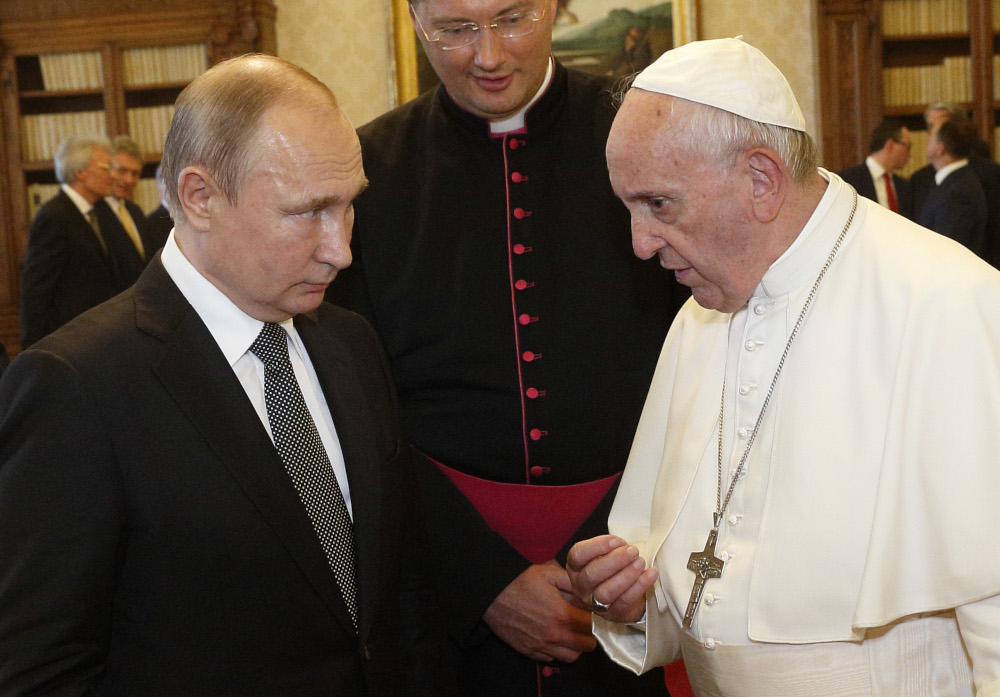 Pope Francis welcomed Russian President Vladimir Putin to the Vatican July 4, and the two discussed the ongoing wars in Eastern Ukraine and in Syria, the Vatican said. Russia plays a major role in both conflicts.

At the end of the 55-minute private meeting, Alessandro Gisotti, interim director of the Vatican press office, issued a statement describing the discussions as "cordial."

The pope and president, he said, "expressed their satisfaction at the development of bilateral relations," which included the signing in Rome July 4 of a collaboration agreement between the Vatican's Bambino Gesu Pediatric Hospital and pediatric hospitals in Russia.

Francis and Putin "then turned their attention to various questions of relevance to the life of the Catholic Church in Russia," Gisotti said, as well a discussion of "the ecological question and various themes relating to current international affairs, with particular reference to Syria, Ukraine and Venezuela," where Russia has been supportive of embattled President Nicolas Maduro.

It was the third time Francis and Putin have met at the Vatican. They met in November 2013 and again in June 2015. Putin arrived late for each of the meetings, including July 4 when he was an hour late.

When reporters entered the room after the two had met privately, Putin told the pope, "Thank you for the time you have dedicated to me."

"It was a very substantive, interesting discussion," he said.

In the traditional gift exchange, Francis gave the Russian president a signed copy of his message for World Peace Day 2019 and an 18th-century etching of St. Peter's Square "so you don't forget Rome."

Putin gave the pope a large icon of Sts. Peter and Paul and a DVD of a Russian film about the artist Michelangelo.

After the meeting with the pope, Putin and Russian Foreign Minister Sergey Lavrov met with Cardinal Pietro Parolin, Vatican secretary of state, and Archbishop Paul Gallagher, the Vatican foreign minister.

The ongoing war in Eastern Ukraine, where Russian-back separatists have been battling government forces since 2014, had been expected to be a major topic of discussion.

On the eve of the meeting, Archbishop Paolo Pezzi of the Archdiocese of the Mother of God in Moscow told Vatican Radio Italia, "Even though we are not aware of the program of the meeting, I can imagine that themes dear to the Holy Father, such as peace and safeguarding our common home, are likely to be on the agenda of discussion." 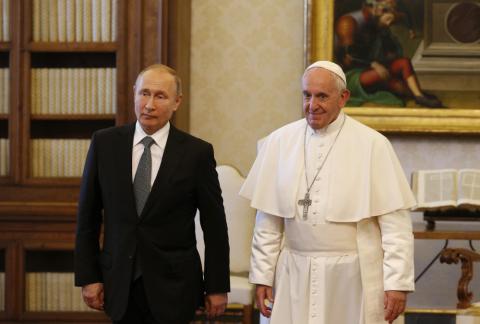 The archbishop also indicated it was unlikely that the visit would result in a long-awaited invitation for the pope to visit Russia, a dream that was particularly close to the heart of St. John Paul II.

While Vatican-Russian Orthodox relations have steadily improved and Francis personally met with Patriarch Kirill of Moscow in Cuba in 2016, tensions continue, including over the Vatican's support for the Ukrainian Catholic Church.

Francis' meeting with Putin took place the day before the pope was to begin a two-day meeting with the head of the Ukrainian Catholic Church, Archbishop Sviatoslav Shevchuk of Kiev-Halych, members of the church's permanent synod, its metropolitan archbishops and Vatican officials.

Announcing the meeting in May, the Vatican press office had said, "The Holy Father wishes to give a sign of his closeness to the Ukrainian Greek-Catholic Church which carries out pastoral service both at home and in various places in the world."

The meeting, it said, would look at "the life and needs of Ukraine in order to identify the ways in which the Catholic Church, and in particular the Greek-Catholic Church, can increasingly dedicate herself to the preaching of the Gospel, to contribute to the support of those who suffer and to promote peace, in agreement, as far as possible, with the Catholic Church of the Latin rite and with other churches and Christian communities."

In 2016 Francis asked Catholic throughout Europe to take up a special collection for people suffering from the war in Eastern Ukraine and he made a $5-million donation of his own. The ongoing "Pope for Ukraine" project continues to assist people in the warzone and those displaced by the fighting.