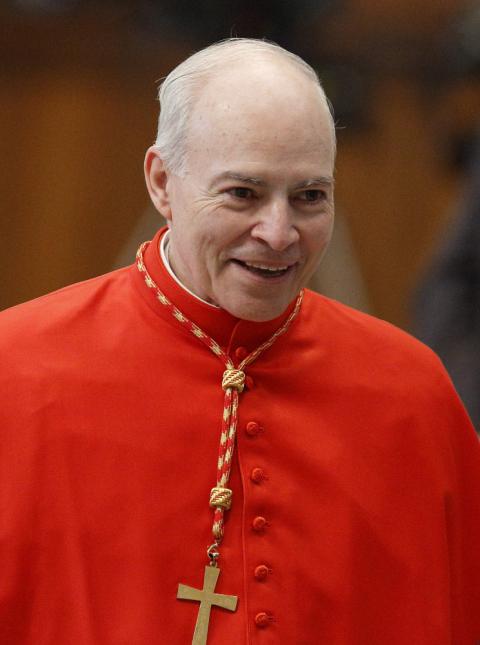 Cardinal Carlos Aguiar Retes of Tlalnepantla, Mexico, is seen at the Vatican Nov. 19, 2016. He was named archbishop of Mexico City Dec. 7. (CNS/Paul Haring)

Pope Francis picked a longtime ally to lead the world's largest archdiocese, where many professing the Catholic faith have fallen away from the church and senior clergy have failed to influence many changes in social policy.

In 2007, Aguiar collaborated with then-Cardinal Jorge Mario Bergoglio of Buenos Aires — who would become Pope Francis — in writing a document on evangelization in the Americas for the Latin American and Caribbean bishops. The document, which became known as the Aparecida document for the city in Brazil in which it was written, calls for Catholics to prioritize reaching people on the peripheries of society. It has become a guide of sorts for the current papacy.

In a statement via Twitter, Aguiar said he recognized God's will and would accept the new position "with trust in the Holy Spirit to obey, and full of hope for this ecclesiastical responsibility in favor of God's people."

His appointment to the Mexico City Archdiocese comes as the city of nearly 9 million people recovers from a devastating earthquake, which killed more than 300 people.

It also comes as the church struggles with changing social attitudes Mexico City, where leftist governments have ruled for the past 20 years and approved measures such as same-sex marriage, less-restrictive divorce laws and the decriminalization of abortion; Rivera vociferously opposed these changes, but was unable to mobilize the masses — and Catholics at large — against them.

Working to restore the church's standing in the capital, the outgoing cardinal cut a controversial course. Some church social programs were left to wither, but observers say they will rank among Aguiar's top priorities.

Jorge Traslosheros, a Catholic commentator and history professor at the Autonomous National University of Mexico, said of Aguiar: "He has an intellectual finesse with a pastoral passion," along with a talent for talking with people of all social strata and moving in the world of politics.

"Don Carlos Aguiar Retes is a man capable of speaking with the president of the republic and, half an hour later, he is (in) the poorest neighborhood of Tlalnepantla, having a bite to eat with the woman selling tamales," Traslosheros said.

In Tlalnepantla, Aguiar organized an initiative in which the laity went out and invited their neighbors to rediscover parish life. He also preferred that laity take the lead in protesting initiatives such as a plan to enshrine same-sex marriage rights in the constitution, said Traslosheros.

Bernardo Barranco, a Mexican commentator and church observer, said, "I think that the reading here is the pope has prepared for more than a year, with (Cardinal) Aguiar Retes, to have important people, loyal people at the head of a church as important as the Mexican church."

Born in the western state of Nayarit, Aguiar, 67, has served as bishop of three dioceses in Mexico state, which surrounds the Mexican capital like a horseshoe and takes in gated communities and grungy suburbs.

The state is notorious for social problems such as poverty, violence and the murders of women, which go uninvestigated and unpunished by the authorities. It also has a closed political culture rife with accusations of corruption and, according to Barranco — who served as an electoral commissioner there — the practice of "politicians doing business and businessmen doing politics."

Aguiar was considered close with Mexico state politicians. He accompanied the then-governor of Mexico state, Enrique Pena Nieto — elected president of Mexico in 2012 — to the Vatican in 2009.

The newspaper La Jornada reported the Mexico state government had paid for catechists in the Archdiocese of Tlalnepantla.

But Aguiar was considered key for achieving changes to Mexico's constitution in 2009, which allowed for increased religious liberty in a country with historic church-state tensions. The Vatican and Mexico established diplomatic relations in 1992 after decades of estrangement.

"The appointment of (Cardinal) Aguiar clearly shows that the Vatican wants in the archbishop of Mexico (City) someone who knows how to talk to politicians, and especially how to get important concessions from them," said Pablo Mijangos Gonzalez, history professor at the Center for Teaching and Research in Economics, a Mexican university.

The cardinal also will be challenged to win back Mexico City Catholics; census data shows they are leaving the faith at a rate faster than the national average.

"Right now, I can't see how he will close the gap between the Catholic Church and the young educated people in Mexico City, who feel alienated from all kinds of institutional religion," said Mijangos Gonzalez.