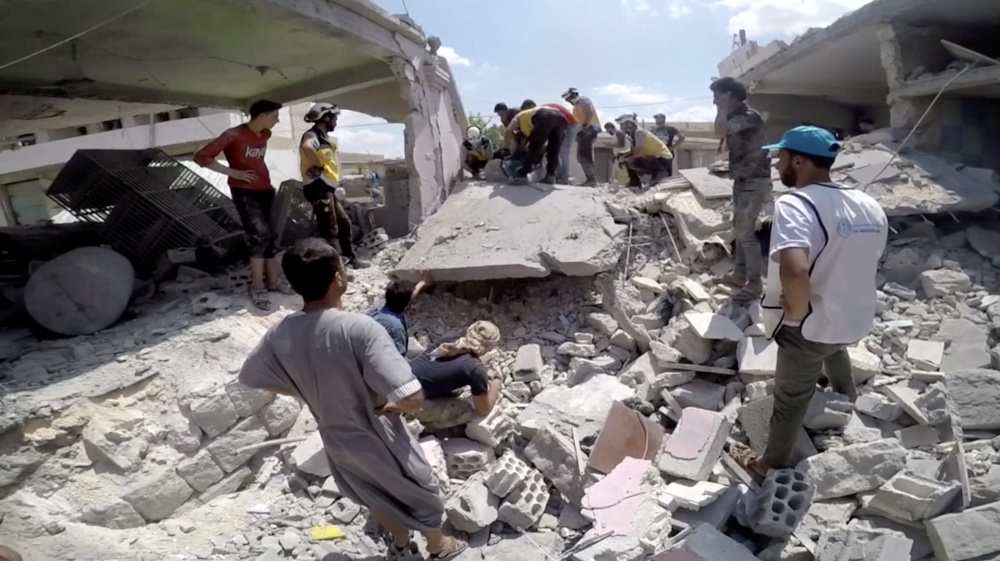 A member of the White Helmets, also known as the Syria Civil Defense, uses a saw on rubble after an airstrike in this screen grab taken from a social media video said to be taken in Idlib, Syria, July 16, 2019. Pope Francis urged Syrian President Bashar Assad to put an end to his nation's eight-year-long conflict and seek reconciliation for the good of the country and its vulnerable people. (CNS/Reuters/White Helmets)

Pope Francis urged Syrian President Bashar Assad to put an end to his country's eight-year-long conflict and seek reconciliation for the good of the nation and its vulnerable people.

"The Holy Father asks the president to do everything possible to put an end to this humanitarian catastrophe, in order to protect the defenseless population, especially those who are most vulnerable, in respect for international humanitarian law," said Cardinal Pietro Parolin, Vatican secretary of state.

During the meeting, Turkson gave the president the pope's letter, which expresses "Pope Francis' deep concern for the humanitarian situation in Syria," particularly for civilians in the province of Idlib, said a written statement from the new director of the Vatican press office, Matteo Bruni.

The United Nations said conditions in Syria were "alarming" for millions of civilians.

Nearly 12 million people were in need of humanitarian aid and 5 million more were in serious need, Najat Rochdi, senior humanitarian adviser to the U.N. Special Envoy for Syria, said July 21. The increased crisis was due to intensified fighting between the government and rebels in Idlib, where the 3 million people who live there have essentially become trapped in a battle zone.

Needed infrastructure has been destroyed, at least 350 civilians reportedly have been killed and more than 330,000 people have been displaced by the fighting, the U.N. said.

In an interview with Andrea Tornielli, editorial director for the Dicastery for Communication, Parolin said the pope wrote the letter because of his concern for the "emergency humanitarian situation" there.

"The pope follows with apprehension and great sorrow the tragic fate of the civilian population, children in particular, caught up in the bloody fighting. Unfortunately, the war grinds on – it has not ended: The bombings continue, various health facilities have been destroyed in that area, while many others have had to suspend their activities, either completely or partially," Parolin said.

Detailing some of the specific requests the pope made in the letter to the president, the cardinal said the pope renewed his appeal "for the protection of civilian life and the preservation of the main infrastructures, such as schools, hospitals, and health facilities."

"What is happening is intolerable and inhuman," the cardinal said.

The pope's concern is not politically motivated, he added, but reflects a desire for a "climate of fraternity" in the hopes that reconciliation "may prevail over division and hatred," Parolin said.

He said the pope asked Assad to make a number of concrete gestures to promote reconciliation, such as, "creating the conditions needed for the safe return of exiles and internally displaced persons, and for all those who wish to return to the country after having been forced to leave. He also mentions the release of prisoners and the access of families to information about their loved ones."

The Independent International Commission of Inquiry on the Syrian Arab Republic published a report about the plight of political prisoners, saying "there are tens of thousands of people who have been arbitrarily detained," the cardinal said.

Sometimes "they are allegedly subjected to various forms of torture without any legal assistance or contact with their families. The report notes that, unfortunately, many of them die in prison, while others are summarily executed," he added.

Parolin said the Vatican has long been advocating the need for "an appropriate political solution to end the conflict, overcoming partisan interests."

"This must be done using the instruments of diplomacy, dialogue, and negotiation, along with the assistance of the international community," he said.

"We are concerned about the stalemate in the negotiation process – especially that seen in Geneva – for a political solution to the crisis. That is why, in the letter sent to President Assad, the Holy Father encourages him to show goodwill and to work toward finding viable solutions, putting an end to a conflict which has lasted far too long and which has led to the loss of numerous innocent lives," the cardinal said.

He said the pope reminded Assad that war only generates more war and violence incites even more violence.