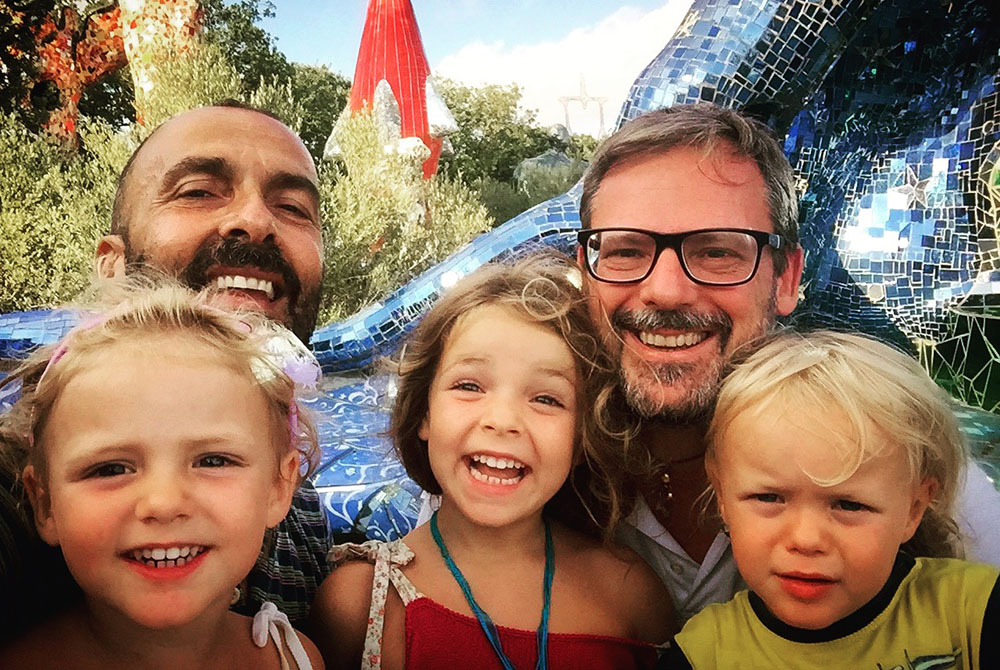 Andrea Rubera, at left, with his husband Dario and their three children (Provided photo)

Thanks to the personal intervention of Pope Francis, three young children of one Italian gay couple are being brought up in the Catholic faith and even ministering as altar servers.

About five years ago, Andrea Rubera and his husband Dario were considering whether to enroll their oldest child, then about 3, in a catechetical program at a Rome-area parish. But they were afraid their child might be treated differently, or be subject to some sort of prejudice.

When by chance Rubera was asked in April 2015 if he would be part of a group invited to participate in the pope's daily Mass at the Vatican's Santa Marta guesthouse, the gay Italian Catholic brought a letter to give to Francis, laying out his dilemma.

Days later, Rubera got an unexpected phone call. "I answered and it was the voice of the pope asking me, 'Mr. Rubera, is that you?' " Rubera recounted to NCR.

"I think you should do it," Rubera remembers the pope saying. "Go to the pastor, ask for a meeting, introduce yourself transparently and I'm quite confident that everything is going to be all right."

The layman did as the pope suggested. His three children have now each gone through the catechetical program and minister as altar servers. And the oldest is preparing to receive first Communion.

Rubera previously spoke about his personal experience with Francis as part of the documentary "Francesco," directed by Evgeny Afineevsky and released last year. He says now that the pope's advice offered a "fundamental step" in his family's life.

"It was something that really helped me in coming out of a cul-de-sac," said the Italian.

Although Rubera said he hasn't spoken to Francis since their first phone call, he said he has been able to make sure the pope received a second letter, reporting on his children's progress.

"I'm happy to be sure that he got the news of how our kids are doing," said Rubera. "I'm not expecting he's going to call me again."

A version of this story appeared in the Feb 5-18, 2021 print issue under the headline: Pope's phone call helps children of Italian gay couple become Catholic.