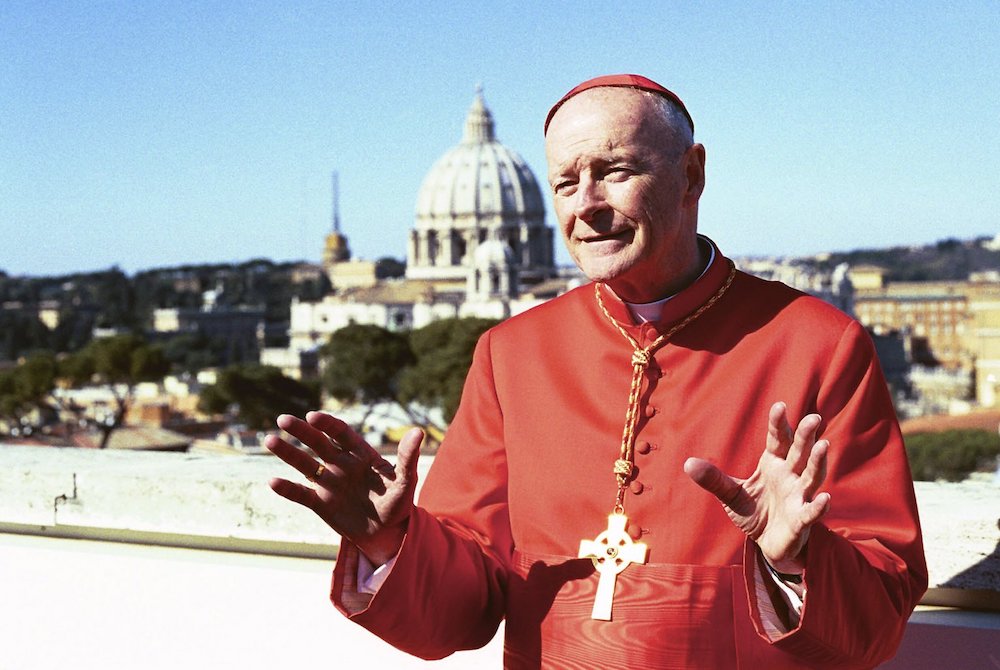 As a newly created cardinal, Theodore McCarrick addresses the media on the roof of the North American College in Rome following a consistory ceremony at the Vatican Feb. 21, 2001. (CNS/Carol Zimmermann)

That's the most shocking number in the Vatican's 449-page report on ex-Cardinal Theodore McCarrick. McCarrick appears to have molested 17 "postpubescent boys or young men" over the course of his career (Page 440). Some victims were as young as 12 years old. Some he molested repeatedly. Many were children in families that he knew well and visited frequently. He was trusted as a "member of the family."

The Vatican report does not reveal names or discuss the individual cases. However, it does lay out his typical pattern of grooming and molesting his victims. He used his power to gain access to their families. He forged strong relationships with their parents. He insisted that the boys call him "Uncle Ted" and he referred to them as his "nephews," an easily exposed lie since McCarrick was an only child. He plied his victims with gifts, favors, trips and liquor. Then he took them to bed in isolated places where they had no hope of help or recourse, typically his beach house on the Jersey Shore or an apartment at a hospital in New York.

New lawsuits are still being filed, including one in November in U.S. District Court for the District of New Jersey, alleging repeated "rape" by McCarrick of a boy beginning at the age of 12. The plaintiff is now 47 years old.

Even though he is 90 years old, McCarrick should be made to answer for his crimes. His victims were children and youth who had their innocence and often their faith taken away from them. A court judgement would not just give them money, it would restore a little of their dignity and make it clear that they were victims of a powerful bishop.

The content of the Vatican report on McCarrick will burn the varnish off your desk. It is written by an American lawyer, Jeffrey Lena, from Berkley, California, in a lawyerly and dispassionate style which adds to its credibility.

The most shocking parts (dealing with minors) come in its final 12 pages, but the whole document is nothing short of remarkable. At times, it reads like a novel or a screen play.

For instance, an account of a 1990 dinner meeting held in an empty catering hall in Newark, New Jersey (Pages 87-93) — it could be a scene straight out of "The Sopranos." The meeting included McCarrick, two other New Jersey bishops (Mortimer Smith and James McHugh), and Msgr. Dominic Bottino of Camden. There was also another unnamed "young cleric" who was seated at McCarrick's right.

They entered the catering hall through a back alley. McCarrick was seated at a single table in a giant hall, with only one crystal chandelier burning directly over the table. McCarrick, then archbishop of Newark, had been drinking with the young cleric "for a while." Bottino "gained the impression that McCarrick was inebriated." At one point, McCarrick pounds the table and blurted out "I deserved New York!" After a toast, the guests became aware that McCarrick had his right hand on the young cleric's crotch area and was moving his hand up and down. Bottino recounted that the young cleric "was paralyzed" with "his eyes wide open, like a 'deer in the headlights' " (Page 91).

The incident demonstrated two things about McCarrick. First, it shows his naked ambition. Like a mafia Don, he thinks of high office in the church as a reward for loyalty and something he has a "earned" by his service to the higher up. Second, it demonstrates his brazen sexual behavior. He was unashamedly sexually assaulting the young cleric in front of witnesses. Bottino and McHugh immediately got up and left, but no one said anything. McCarrick was too powerful, He clearly thought of himself as untouchable.

This report is the most candid document on the child abuse crisis and the sin of clericalism ever released by the Vatican. Pope Francis and the Vatican Secretary of State office deserve a lot of credit for their honesty in letting the unredacted version be made public.

Overall, what the report reveals is a hierarchy more concerned about protecting the institutional church and their own careers than with protecting youth or the seminarians and young priests.

The sine qua non for bishops is loyalty. McCarrick received recommendations from the two bishops who were present at the catering hall incident. My former archbishop, Cardinal James Hickey, wrote a letter of support in 1994 saying that McCarrick's service to the church and the Holy Father goes beyond the call of duty and noting his fund raising skills (Pages 114-115). McCarrick also got letters of support from many U.S. bishops including Joseph Fiorenza of Houston (then of the National Conference of Catholic Bishops), James Harvey of the papal household, George Murry of Youngstown, Ohio, and Adam Maida of Detroit. McCarrick had helped them all, and he called in his chits. His fundraising was often mentioned.

Much of the report is focused on rebutting charges made by former papal diplomat retired Archbishop Carlo Maria Viganò that Pope Francis did nothing about McCarrick. Viganò's charges appear to be baseless and Viganò is shown to be, at least partially, a liar.

There are many lessons in this report. I came away with three important points.

First, the real culprit is the culture of clericalism.

That culture insulates members of the ecclesial "old boy" network from criticism and evaluation. When McCarrick was investigated, it was always by other bishops. When McCarrick was threatened, he drew on his contacts with other bishops, especially with Pope John Paul II's secretary, Cardinal Stanislaw Dziwisz. Clericalism allowed him to escape giving account. He called in his chips earned by his fundraising and his frequent travels. He knew he would only be evaluated by other members of the "club."

Second, money has a corrupting influence on the decisions about and by the hierarchy.

The church is a money-eating machine. McCarrick was a champion fundraiser. His fundraising ability gave him power beyond his position and insulated him from criticism. Every time he was evaluated for a promotion to higher office, his ability to raise money was mentioned in his favor. On Page 4, the Vatican report says, "… although McCarrick's fundraising skills were weighed heavily, they were not determinative with respect to major decision made relating to McCarrick, including his appointment to Washington in 2000" (Page 4). On that statement, I simply call "BS." 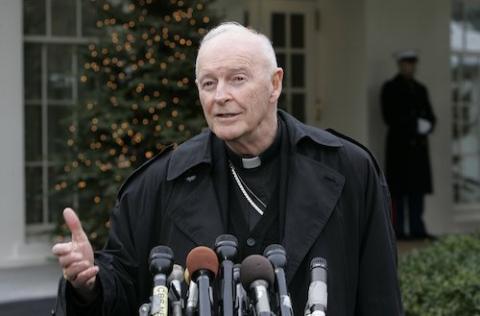 Money always talks. McCarrick virtually made it sing. He founded the Papal Foundation in 1990. He sent millions of dollars to Rome during his career. Even in retirement, he was raising money and giving lavish gifts to Vatican officials. He knew that some of those very people might someday sit in judgment over him. These gifts were nothing other than a prophylactic bribe. It strains credulity to think that they were anything else.

Third, McCarrick's frenetic travel schedule shows a man who is running away from something, perhaps himself. He was never home. The report has page after page of lists of his travels. In just the six years he was in Washington, he traveled to more than 24 countries, sometimes more than once. That does not count his very frequent trips to Rome. He especially traveled to wherever the pope was going. All of which accomplished exactly what? The promotion of his image and his career. His travel schedule had little to do with his job as a bishop and a lot to do with his ego. There is something deeply unstable about a man who is always gone. Travel can be an escape from the humdrum of ordinary work. It can also be cover for bad behavior.

Fourth, there are no heroes in the report. John Paul II's judgment is called into question. He reserved the appointment of the archbishop of Washington to himself and avoided the usual reviews. He chose McCarrick despite all the well-known rumors of sexual misconduct and a clear warning letter from New York Cardinal John O'Connor in 1999.

On Aug. 6, 2000, McCarrick got wind of O'Connor's letter. He said, "friends in the Curia tipped him off" (Page 171). In response to the tip-off, McCarrick wrote a handwritten rebuttal letter to Dziwisz and had it hand delivered to the Vatican. McCarrick protested his innocence and stated categorically, "… in the seventy years of my life I have never had sexual relations with any person, male or female, young or old, cleric or lay, nor have I ever abused another person or treated them with disrespect" (Page 170).

Dziwisz intervened on behalf of his friend McCarrick. John Paul appointed McCarrick to Washington. He arrived here in D.C. just after New Year's Day 2001. The night before McCarrick was invested, as we lined up to go into evening prayer, a priest from Newark warned me, "Don't go down to the Shore with Teddy McCarrick." The rumors were everywhere.

In his six years in Washington, McCarrick was not just our archbishop, he was a media star, frequently on national talk shows. There are no allegations of sexual misconduct during his tenure in Washington. Perhaps by age 70 he had exorcized some of his demons. A priest friend of mine says, "Every one of us has a skeleton or two in our closet, but McCarrick had more than skeletons, he had demons."

Some of his behavior seemed odd at the time but makes sense in retrospect. I personally witnessed him approach handsome young men in my parish, about whom he knew absolutely nothing, and invite them to consider the priesthood. A vocation based on what? He was clearly drawn to their looks.

In the 449 pages of the Vatican report, there are thousands of words and hundreds facts. But there is one number we should remember. Seventeen. That is the number of children whom Cardinal Theodore McCarrick sexually molested and whose lives he severely damaged.