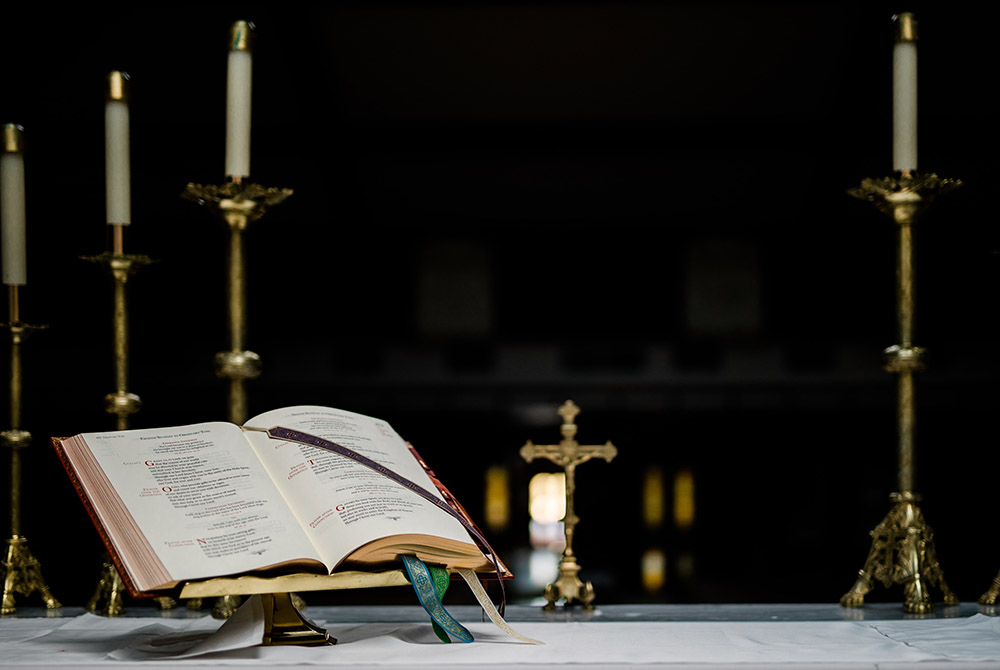 As U.S. dioceses continue to pay out big settlements for lawsuits, the church is facing another nettlesome problem stemming from the abuse scandal: Priests who say they were falsely accused are suing for defamation.

Archbishop George Lucas of Omaha complied with that request, and in November 2018, the Omaha Archdiocese published a list of the names of 38 priests and deacons who had faced "substantiated claims" of abuse in the archdiocese.

The fallout from that list reverberates today. One of the priests whose name was on it — Fr. Andrew Syring — is suing the Omaha Archdiocese for defamation, counted among those priests who say they have been unfairly swept up in the church's effort to repair its reputation and put the crisis behind it.

Lyle Koenig, Syring's lawyer, said his client's defamation suit is one of 20 to 25 similar cases in the country. By comparison, 7,002 priests were "credibly" or "not implausibly" accused of abuse in the U.S. between 1950 and June 30, 2018, according to BishopAccountability.org, which cited published information from the U.S. Conference of Catholic Bishops.

Melanie Sakoda, survivor support coordinator for Survivors Network of those Abused by Priests, or SNAP, noted that false allegations against priests are "extremely rare."*

"For a Catholic diocese to have accepted an allegation as 'credible' makes it, in my mind, even less likely that the accusation is false," Sakoda said in an emailed comment.

"I think it would be incredibly unlikely that a priest would prevail in such a lawsuit, given that the diocese will have access to all of the records in the case," she said. 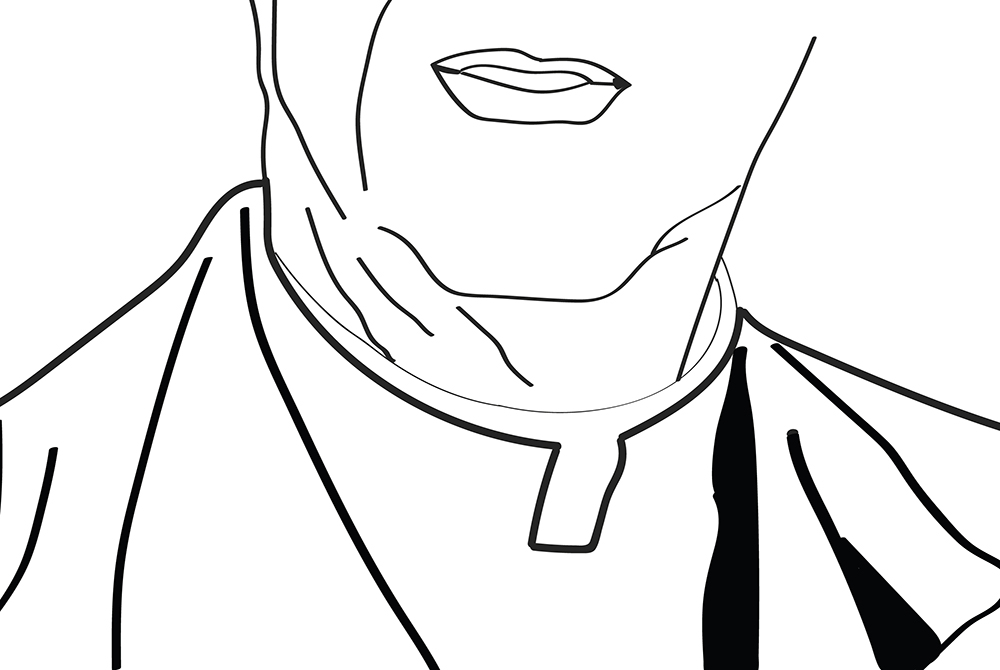 In Nebraska, Syring, 43, is seeking $2.1 million in damages for defamation and denies the allegations made against him.

The cleric's case dates back to 2014, when he served as an associate priest at Divine Mercy parish in his hometown of Schuyler, Nebraska. There, he was accused of inappropriate behavior that included "unwanted touching of young adults, publicly kissing and hugging minors on the cheeks and inappropriate conversations with young adults and teenagers," according to the Omaha World-Herald.

The allegations were reported to law enforcement, but no charges were filed, the World-Herald reported. Syring, at Lucas' request, received months of counseling and therapy before being cleared to return to public ministry with the approval of the archdiocese's lay review board, which serves as a consultant to the archbishop on abuse cases.

He was immensely popular at St. Mary's, according to parishioner Charissa Steffensmeier.

"The biggest thing is that he just drew so many people in and back to church; so many people said later that they started going back to Mass after he came," Steffensmeier said, "because he is very relatable, very self-effacing, but mostly I would say what most people point to is his genuine love and reverence for the Eucharist. It would just shine through whether it was Mass, a homily, or a conversation. … He inspired an energy and an excitement about the church and about Mass." 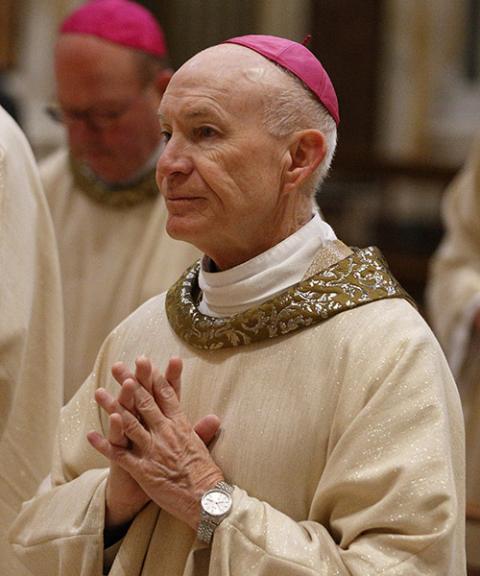 Archbishop George Lucas of Omaha, Nebraska, and other U.S. bishops from concelebrate Mass at the Basilica of St. Mary Major in Rome Jan. 14. The bishops were making their "ad limina" visits to the Vatican to report on the status of their dioceses to the pope and Vatican officials. (CNS/Paul Haring)

Then in October 2018, Syring suddenly vanished from St. Mary's. On Oct. 30 of that year, Lucas asked Syring to resign. Koenig, Syring's lawyer, said the priest agreed to step down because of the oath of loyalty to the archbishop that he had taken when he was ordained in 2011.

Steffensmeier points to events on Oct. 25, five days earlier, that prompted Lucas' request for Syring to leave. On that evening, Lucas and Fr. Scott Hastings, vicar of clergy for the archdiocese, met with parishioners of St. Wenceslaus, who were upset by reports that revealed previous allegations of abuse against Fr. Francis Nigli, who had been an associate priest at the parish.

Nigli had been dismissed from the parish in June. He had been accused of sexual assault for groping and kissing a 21-year-old man at St. Wenceslaus in May, but parishioners were especially rankled because they discovered Nigli had faced similar allegations in 2013. No charges were filed, and Nigli received mental health treatment after the alleged incident in 2013.

At the time, Deacon Tim McNeil, chancellor for the archdiocese, told the World-Herald that Syring's resignation was the result of the archdiocese reexamining the priest's history in light of calls from Catholics for greater transparency and higher standards for priests.

In December 2018, Lucas met with Steffensmeier and about 15 other parishioners. At the meeting, Steffensmeier said, Lucas explained that Syring had been dismissed for "boundary violations" and that the archdiocese was holding clergy to a "higher standard" for conduct.

But Syring's civil suit, which was filed in August in Cuming County District Court, said the archdiocese had not changed its standards of conduct for clergy at the time it dismissed the priest.

Furthermore, Syring had always vehemently denied the original allegations, had obeyed the archbishop in undergoing therapy and had a clean record since returning to public ministry, Koenig, his lawyer, said.

In response to an interview request from NCR, McNeil, the Omaha Archdiocese chancellor, said the archdiocese won't comment on a matter that is now being litigated.

Robert Flummerfelt, a canon lawyer from Las Vegas, said that under church law, if a priest is accused, the bishop must first conduct a preliminary investigation to see if the accusation is credible. During that investigation, the priest's identity should be kept confidential but the investigation often becomes public knowledge, Flummerfelt said.

If a bishop determines the allegation is credible, he must refer the case to the Vatican's Congregation for the Doctrine of the Faith, which will decide how the church should proceed.

A priest can appeal a bishop's decision about dismissal to Rome, Flummerfelt said, but if the Vatican doesn't overturn the bishop's decree, the priest is out of options within the church.

What's more, Flummerfelt said, when a priest is accused of sexual abuse, he often faces the burden of proving his innocence.

"The law is all are presumed innocent until proven guilty," he said. "The practical situation, though, is that when someone brings forward an allegation and they appear credible, the effective presumption changes to, 'Why would the person lie?' So the priest is almost in a situation in which he has to prove his innocence, which is difficult."

The veracity of allegations against a priest is also at issue in the case of Fr. Eduard Perrone in Detroit. The Detroit Archdiocese suspended Perrone from public ministry last year after it deemed that allegations that Perrone had groped a boy 40 years earlier contained a "semblance of truth," the Detroit Free Press reported.

Last year, Perrone sued a detective in Macomb County whose report, he said, was the basis of the church's decision to suspend him, the Free Press said. Perrone said the detective "fabricated" a rape claim against him.

In August, Perrone won $125,000 in a settlement with Macomb County, which said it settled to avoid the legal fees of a jury trial and a potentially big penalty if Perrone won.

In February, a group of 20 parishioners from Assumption Grotto Church in Detroit, where Perrone was the pastor, sued the Detroit Archdiocese for $20 million on the grounds that they have endured emotional suffering because of what they claim is an unjust suspension of their pastor.

Ned McGrath, a spokesman for the archdiocese, said that the archdiocese is seeking to dismiss the suit and that no trial date has been set, while the church investigation is now before the Vatican. He had told the Detroit Free Press that Perrone is presumed to be innocent while he is suspended.

Flummerfelt, the canon lawyer, said that dioceses face pressure to be tough in abuse cases.

"I think the dioceses are in a very difficult situation because they have an obligation to make sure that there's zero tolerance of abuse of any sort against minors," he said.

"A lot of clergy are put in a very difficult position of feeling alienated, ostracized during the process, and it's a consequence of where we were as a society. The institutional church is trying to regain credibility on this issue, and so being strong and tough is seen as a way to do that. But for the individual priest, especially for the falsely accused, there could be circumstances where the reality of how he is treated is not how it should be."

*This quote was corrected from a previous version.