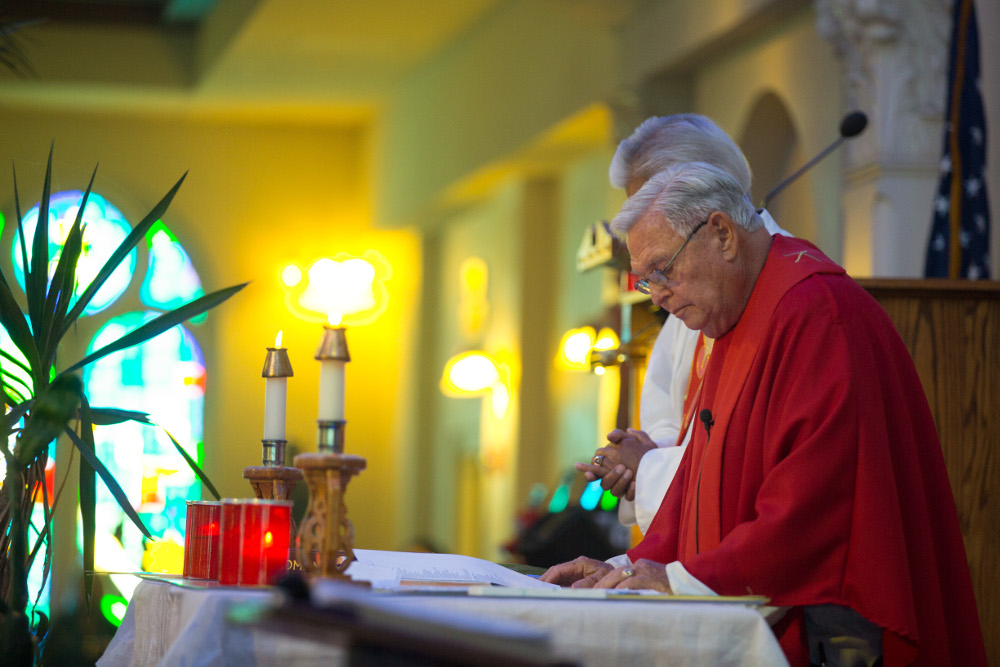 After Palm Sunday Mass April 14 at Our Lady of Guadalupe Church in Mission, over 1,000 parishioners participated in their annual Palm Sunday procession to a nearly century-old Catholic chapel on the U.S.-Mexico border.

La Lomita chapel, in the Diocese of Brownsville, has been in the spotlight in the ongoing debate over a border wall.

Fr. Roy Snipes, commonly known as the "Cowboy Priest," has been fighting for his entire congregation to maintain access to the chapel, and the procession illustrated the community's commitment to saving their church.

If the wall is built, the government has proposed some sort of a gate or structure that would allow access to the chapel, but even a gate would prevent easy access and may deter worshippers since they can be subject to interrogation just to go into a religious space to pray, the lead counsel for the diocese told Catholic News Service in February.

Diocesan officials believe if the government decides to take some property for the border wall, the action will violate its right to religious exercise under the Religious Freedom Restoration Act. Building a section of the wall near the chapel would only impede those who frequent it for religious services and prayer.

A judge in Texas ruled Feb. 6 that the Diocese of Brownsville must allow federal officials to survey some of its property for possible construction of a border wall on it.

The action had been blocked by Brownsville Bishop Daniel Flores, who earlier said he could not consent to it because such a structure "would limit freedom of the church to exercise her mission." The judge ruled that doing a survey would not constitute a "substantial burden" for the church.

"The Diocese of Brownsville is the most densely populated Catholic diocese in the United States, and at the heart of it is Father Snipes," Joe Boland, Catholic Extension's vice president of mission, said in a statement. "He is a priest full of courage and has an unwavering commitment to his faith and community."

Following the procession, Boland announced Snipes' nomination for Catholic Extension's highest national honor, the Lumen Christi Award. The priest is being recognized for his ability to speak truth into honor and religious freedom.

"In the midst of the challenges facing the Catholic Church and our country, Father Snipes reminds us that courage and conviction are strong core values worth defending," Boland said.

Since its founding in 1905, Catholic Extension has supported the construction and repair of churches and invested in education, training and support of seminarians, priests, sisters, deacons and lay leaders in mission dioceses — those with scarce resources and many of which large geographical areas.

The organization's first grant in 1906 went to La Lomita. Since then, the nonprofit organization has granted nearly $175 million in support to Catholic dioceses in the state of Texas, where the Catholic Church is rapidly growing.

Over the last several years, Catholic Extension has provided aid in support of the humanitarian crises at the U.S.-Mexico border and helped fund immigrant relief efforts at every Catholic diocese along the border.