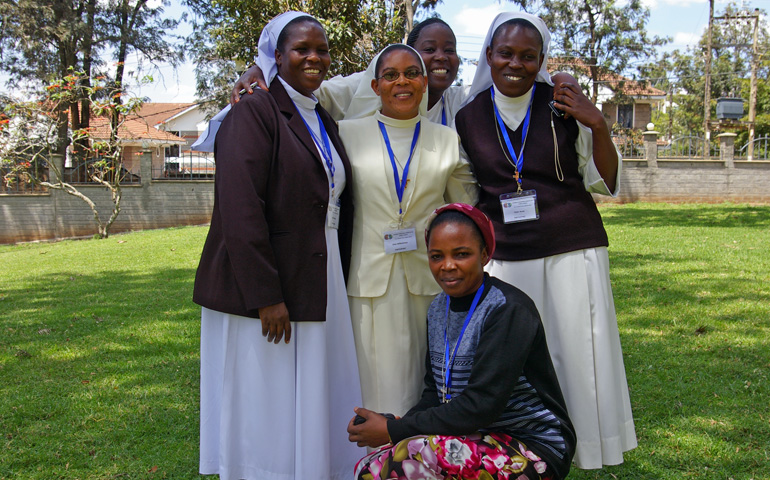 The two sisters have never met. They speak different languages.

Normally, they're separated by differences in culture and lifestyle, not to mention about 1,100 miles and the myriad laws and regulations regarding travel and border crossings.

But from the first look on Zimbabwean Sr. Annah Nyadombo's face, you wouldn't know it. She smiles widely the moment she sees Sr. Marie-Rose Ndimbo, a native of the Democratic Republic of the Congo.

Meeting for the first time in late August, the sisters had traveled to Kenya's capital for a gathering of African theologians focused on ethical issues, convened under the aegis of a global network of scholars called Catholic Theological Ethics in the World Church.

It's a group that, thanks to a series of pioneering scholarships, the women are set to join themselves.

In the last few years, the group has secured funding for seven African women to pursue doctorates at African Catholic universities. They've also arranged funding for an eighth, Nyadombo, to pursue a doctorate at Trinity College Dublin.

Describing the scholarship program during the Aug. 21-23 event, Jesuit Fr. James Keenan, chair of the ethics network and theology professor at Boston College, said, "If this program succeeds, we are looking at the future of theological research, scholarship and writing on the continent of Africa."

Standing outside a retreat center and hostel in western Nairobi where conference participants were staying, Nyadombo was bouncing on the balls of her feet as her fellow scholar Ndimbo arrived for the event. With barely a word, the two embraced in a long hug.

Through the help of a translator -- Jesuit Fr. Peter Knox, a South African theologian -- Ndimbo, a French speaker, and Nyadombo, an English speaker, started to compare notes of their lives.

Similarities abound: Both are members of local orders of women religious, both come from poverty-stricken areas and have dedicated themselves to focusing on issues of justice. Both also have clear views about the struggles women face throughout Africa. One common theme shared among Nyadombo, Ndimbo and several others in the program: using their status as female moral theologians to address the place of women in African society and church.

Another commonality: deep personal experience of some of the world's most debilitating societal and economic suffering and personal journeys of unexpected hope and triumph.

The women in the theological ethicists' program come from countries across the continent: Kenya, Uganda and Tanzania in the east; Nigeria and Cameroon in the west; Zimbabwe in the south; and the Democratic Republic of the Congo in central Africa.

Seven of the eight are members of diocesan orders of women religious. Diocesan orders are not international and instead fall under the canonical authority of a particular diocesan bishop, who technically serves as their superior general.

The women's journeys of faith are complex and varied, mired in both personal and societal struggles.

Sr. Veronica Rop, a native Kenyan, is a member of Kenya's Kalenjin tribal community, one of dozens of major tribal communities that make up the country's ethnic background.

A convert to Catholicism, she was the first Christian in her family. The second of her mother's eight children -- her father has had four wives -- Rop grew up without electricity and walked three miles back and forth to school growing up.

Rop is from Eldoret, a fast-growing town in western Kenya, near the Ugandan border. The first person in the family to graduate high school, she soon joined a local community of women religious, called the Assumption Sisters of Eldoret.

Sr. Wilhelmina Uhai, who is from Tanzania, Kenya's southern neighbor, had something of an opposite upbringing. Both her parents are Catholic, and she recalled how they would never let her or her siblings begin to eat without first saying prayers.

"We didn't eat, we didn't sleep, we didn't do anything before prayers," said Uhai, now a member of the Uganda-based Little Sisters of Saint Francis of Assisi. "They taught me morals. Otherwise, I would not really feel to love the moral issues and to become a moral theologian, and a theologian in the first place."

With the help of the theological ethicists' group, Rop and Uhai are pursuing doctoral work at the Catholic University of Eastern Africa, a pontifical university in southern Nairobi.

Before beginning her own doctoral studies, Rop studied for eight years in the United States, completing bachelor's degrees in theology and special education at Miami's Barry University.

Uhai, who graduated with a master's in moral theology from Nairobi's Catholic University in October before beginning doctoral work there, first completed separate programs in philosophy, pastoral ministry and spiritual direction. While such lengthy academic study might separate some from normal life experience, both Uhai and Rop said it's the struggles of everyday Africans, especially women, that inform their work.

After almost a decade abroad, Rop said she eventually decided to come back to Kenya because she wanted to see what new perspective her time away might have given her.

"I felt that the studies I had in the States gave me a platform to speak for women," Rop said during an interview, as she sat back in her chair and adjusted a brown coat she was wearing over her long white habit.

"I feel that women here just do not have a voice," she said. "I thought that I had to come back to use that platform. Especially as a religious woman, my voice may carry a little more weight."

Several of the women in the theological ethicists' program expressed this responsibility to speak for women across the African continent.

Each mentioned such a feeling of obligation after sharing deeply moving stories of societal and economic strife.

Minutes into their first meeting, Ndimbo and Nyadombo ventured from the traditional icebreakers of a conversation toward their work -- in both cases, focused squarely on helping the neediest.

Nyadombo, who is a member of the Handmaids of Our Lady of Mount Carmel, a Mutare, Zimbabwe, diocesan religious order with a Carmelite charism, explained that she is working on a research project focused on developing a holistic pastoral approach toward those who are suffering from HIV/AIDS. Nyadombo represents her approach with the acronym AGAPE for Access, Generosity, Action, People/Prayer and Involvement.

"It's the same problem everywhere," said Ndimbo, who before pursuing doctoral studies served as a superior of the Congregation of the Sisters, Daughters of Mary, an order based in the northern Congolese city of Molegbe. There are orphanages throughout the Congo filled with "hundreds upon hundreds" of AIDS/HIV orphans, she said, all needing care. Her own congregation has opened up several boarding houses for young mothers who cannot care for their children.

In her interview, Uhai also focused on her experience living face-to-face with poverty and societal strife. But she set her sights too on broader issues of gender inequality.

Following the completion of her initial studies in theology and philosophy, Uhai said, groups of women in her home village asked her to give seminars on how to address some of the most difficult subjects.

Most of the women who approach her are single mothers or refugees, she said, who may live with their children on the street and may have become addicted to drugs.

"They have nobody to help them," Uhai said. "Nobody who will talk to them about how to live."

Their status, she said, is also hindered in some African cultures by views of women in relation to men.

"In some cultures, women are considered servants," she said. "You have no say, you have no rights. You do everything for your husband, but you cannot challenge your husband because you are married. So who are you in the society? You have no voice."

Speaking for and with those women, she said, is fundamental to how she understands her role as a moral theologian.

"God calls us as moral theologians to enter into these situations and to help them come out of it," Uhai said. "Maybe we will not have material things to give them, but maybe through advice, or in talking about the larger problems of our society we can make some difference."

Rop echoes that sentiment, mixing the local and the global.

While her doctoral dissertation at Nairobi's Catholic University focuses on the participation of Kalenjin women in human development efforts in Eldoret, Rop identifies among her role models American women like St. Joseph Sr. Elizabeth Johnson, a theologian at Fordham University in New York noted for her work in feminist issues.

Pointing out an African saying that women are the backbone of the family, Rop asked: "If we take that seriously, and women are so important, why not speak up?"

Back outside the retreat center, where the smiles radiate at the first meeting of sisters in the scholarship program, Ndimbo finds a similar note.

Holding Nyadombo by the elbow, Ndimbo tells her newfound kin she feels empowered by their meeting.

"It's so important that women are now speaking on these issues," she tells Nyadombo. "And it's not just for our generation. There are so many women who will come after us because of these scholarships."

Walking hand-in-hand, the two head inside for more time to connect and share their many similarities -- without the aid of the translator.

Since this story was published in December, Handmaids of Our Lady of Mount Carmel Sr. Annah Nyadombo successfully defended her dissertation for a doctorate in theology from Trinity College Dublin. Her thesis was "A holistic pastoral approach to HIV/AIDS sufferers: Reduction of Stigmatisation in Zimbabwe." She is set to graduate in June.

[Joshua McElwee is an NCR staff writer. His email address is jmcelwee@ncronline.org.]