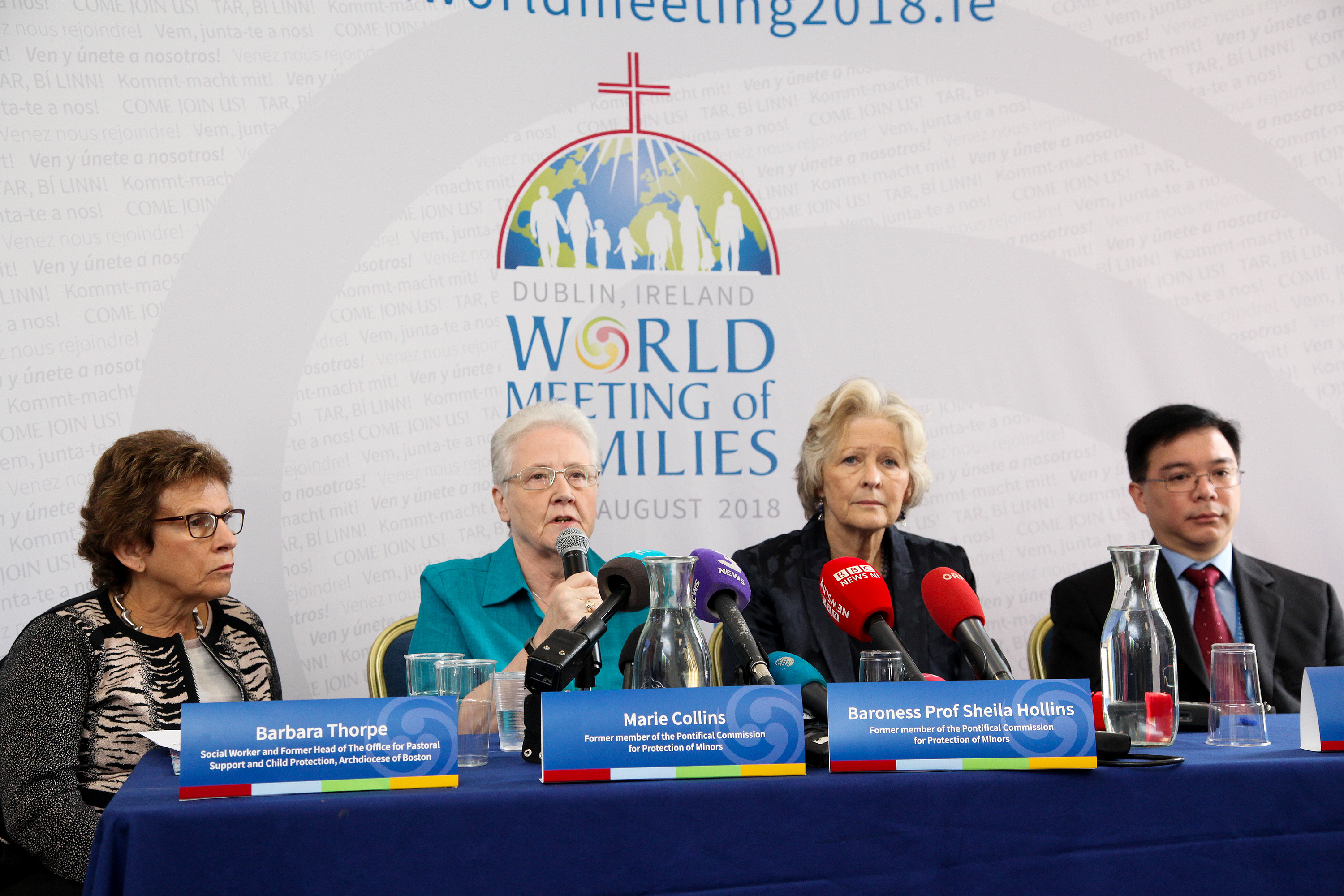 Barbara Thorp, former head of the Office for Pastoral Support and Child Protection for the Boston Archdiocese, Marie Collins, former member of the Pontifical Commission for Protection of Minors, Baroness Sheila Hollins, a psychiatrist and former member of the Vatican's safeguarding advisory body, and Gabriel Dy-Liacco, a psychotherapist and member of the Pontificial Commission for the Protection of Minors, are seen at a news conference at the World Meeting of Families Aug. 24. (CNS/John McElroy/courtesy World Meeting of Families)

Marie Collins, a survivor of Irish clerical sex abuse, has given her backing to Boston Cardinal Sean O'Malley as president of the Vatican's Pontifical Commission for the Protection of Minors.

At a news conference at the World Meeting of Families Aug. 24, Collins, a former member of the Vatican commission, said the cardinal had worked "very hard" to try to achieve safeguarding changes.

"The fact that the commission has not been able to achieve anything in the last four years is not down to Cardinal O'Malley. I don't think it is fair to lay it at the door of the cardinal; it is down to the resistance within the Vatican," she said.

Collins, 71, also said O'Malley had helped put together the accountability tribunal proposals for church leaders, which were accepted by Pope Francis but ended up being shelved due to curial resistance.

In March 2017, Collins resigned in protest over the blocking of the commission's work.

"All the other recommendations came from the commission when I was there, and Cardinal O'Malley was fully behind and part of putting them forward. So, there is no question of him being an impediment. The impediment came from within the Vatican Curia," she said.

Collins was responding to the survivor group End Clergy Abuse, which called for O'Malley to be dismissed from the pontifical commission over its failure to deliver more far-reaching change.

Gabriel Dy-Liacco, a psychotherapist and current member of the pontifical commission, also backed Collins' view: "What we have been able to get through is because of Cardinal O'Malley largely."

Both participated in the panel on safeguarding children Aug. 24. The session at the Royal Dublin Society was moderated by Baroness Sheila Hollins, a psychiatrist and former member of the Vatican's safeguarding advisory body. Hollins replaced O'Malley, who withdrew the previous week to concentrate on allegations of inappropriate behavior at St John's Seminary in his archdiocese.

The fourth panelist was Barbara Thorp, former head of the Office for Pastoral Support and Child Protection for the Boston Archdiocese.

Collins outlined a series of measures she would like the church to implement to keep children safe.

She later told reporters that there is "denial" in the church over clerical abuse. "It is not imaginary, there are people who would prefer to believe that there are multitudes of false allegations, which we know that there aren't."

During the news conference, Thorp appealed for greater transparency from church organizations. She urged Francis to instruct dioceses and congregations to adopt a policy of reviewing their files and making the findings public with the names of anyone identified as having abused a child, along with their assignment history.

"We went through this process in the Archdiocese of Boston and it was very challenging, but it was critical for us to be utterly transparent. I think that is something that could move this forward," she said.

Thorp also called for action to be taken to speed up canonical trials related to clerical abuse, describing the current pace as "beyond glacial."

"It is enormously frustrating that there is no transparency about charges. We had the archbishop of Guam, who had very serious charges against him, but we never knew what the actual charges were, it was never made public." She said years passed before he was found guilty, but what he was found guilty of was not communicated.

She added that the backlog of cases has caused suffering to survivors. "I would recommend that the Holy Father appoint a special prosecutor that would take on the cases and address them and that there would be far more transparency about the actual process."

She suggested that if the Pennsylvania dioceses investigated by the attorney general had a policy of carrying out file reviews and publishing their findings, and had they not stood in the way of those pursuing claims, the terrible suffering that emerged in the recent grand jury report would have been addressed sooner and by the church.

Asked to respond to the growing chorus of church people claiming the abuse crisis was a problem of gay men in the priesthood, Collins rejected the claim as "a red herring."

Dy-Liacco also rejected the link. "Sexual orientation is not the issue here and it is not a cause; many scientific studies have shown this already."

The father of five said, "This is a sexual crime that arises out of a disordered use of power and affection and is expressed in this way through sexuality." He said experts suggested that the significant proportion of cases involving ephebophilia, or the sexual abuse of adolescent males, by older males was "a crime of opportunity."