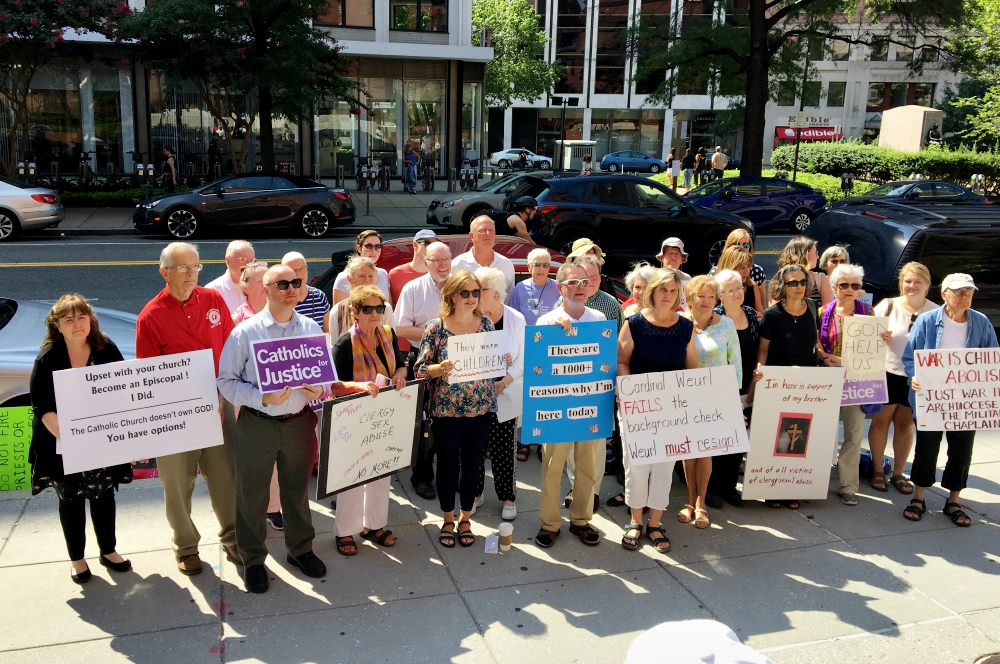 Protesters, including survivors of clergy sex abuse, stand outside the Cathedral of St. Matthew the Apostle in Washington, D.C., Aug. 26. (Julie Bourbon)

A group of about 30 protesters, including survivors of clergy sex abuse, stood outside the Cathedral of St. Matthew the Apostle in Washington, D.C., Sunday morning, calling for the resignation of Cardinal Donald Wuerl, end to cover-ups, and greater inclusion of the laity in church leadership.

Wuerl, who was bishop of Pittsburgh for 18 years before coming to Washington in 2008, has come under fire following this month's Pennsylvania grand jury report documenting 70 years of abuse in six dioceses in that state. He has lost credibility in the eyes of many calling for reform.

Wuerl, who canceled a trip to Ireland in which he would have participated in Pope Francis' visit to the World Meeting of Families this weekend, presided at the 8:30 a.m. Mass at the cathedral in Washington.

The vigil and protest there was one of several scheduled across the country by an ad hoc group calling itself Catholics for Action. Similar demonstrations were held in Boston; Chicago and Naperville, Illinois; Philadelphia; South Bend, Indiana; St. Louis; and St. Paul, Minnesota.

Bob Cooke, who led the proceedings in Washington, said the purpose was much broader than just calling for the resignation of the local archbishop.

"Catholics, both conservative and progressive, are saying enough is enough," said Cooke, a retired union organizer who consults with peace and justice organizations. "We're hoping a tipping point has been reached and all lay Catholics will follow Francis's call" to take a more active role in the church.

The service, which called for healing and change, began with prayer and messages from survivors, including Dave Lorenz, who was abused as a 16-year-old in Kentucky by Fr. Earl Bierman, a serial abuser who died in prison in 2005. 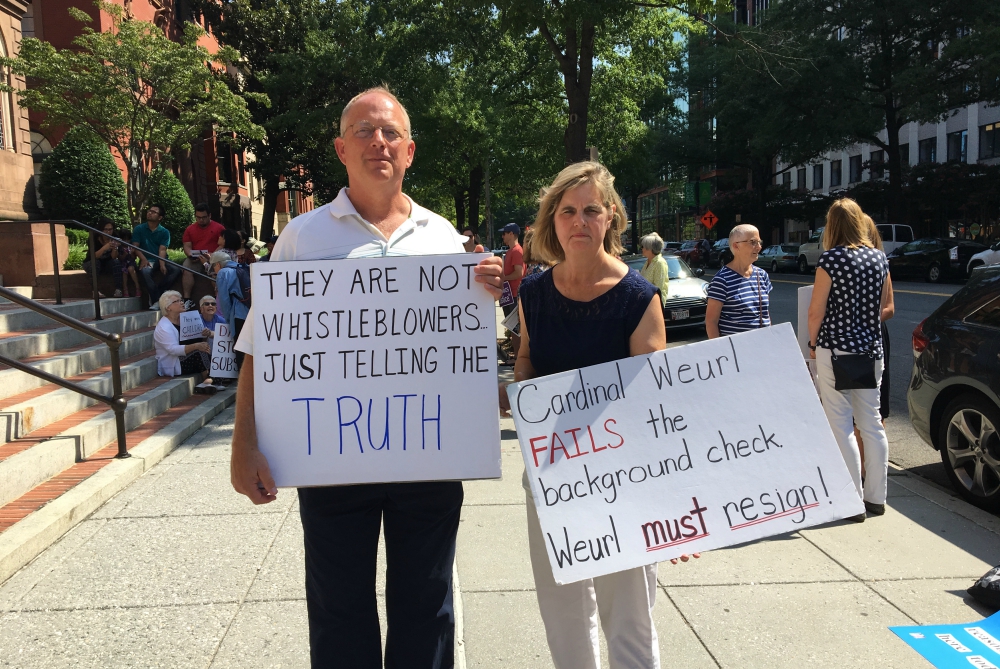 Dave Lorenz and his wife, Judy, attend the Aug. 26 protest outside the Cathedral of St. Matthew the Apostle in Washington, D.C., where he spoke about the abuse he suffered as a teenager in Kentucky at the hands of a priest. (Julie Bourbon)

"Wuerl's resignation is the first step," said Lorenz, who was there with his wife, Judy. "Every bishop who has protected predators should resign. They are not doing their job."

Lorenz held a sign that read, "They are not whistleblowers. Just telling the truth."

At the end of the sidewalk service, as parishioners filtered out of the 10 a.m. Mass and others ascended the steps for the 11:30, protesters handed out flyers that quoted the pope's letter of Aug. 20 — "We showed no care for the little ones; we abandoned them" — and highlighted a list of petitions, including: 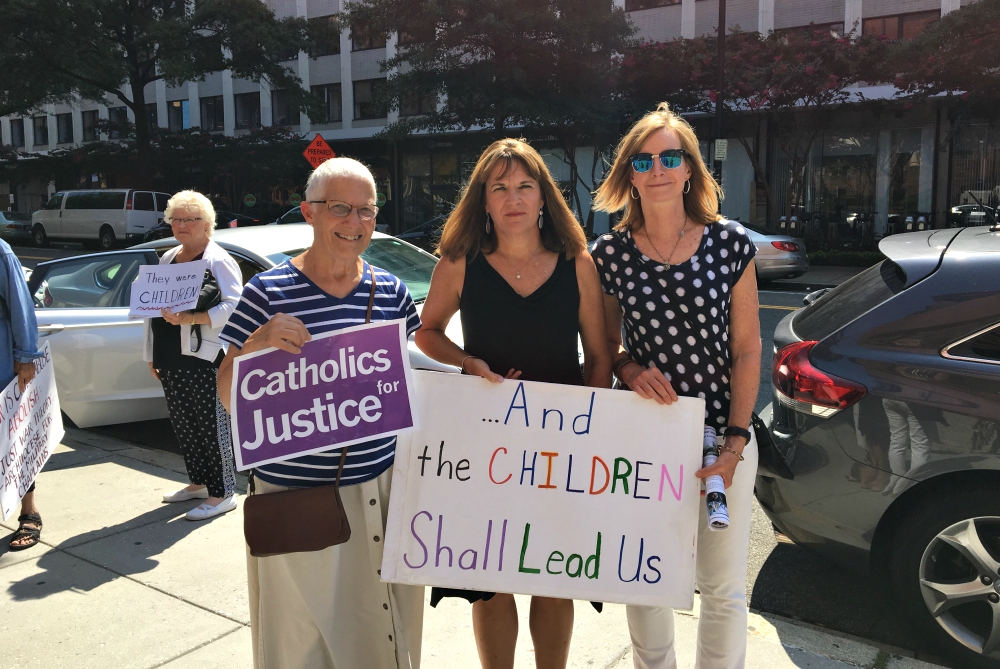 Marie Dennis, co-president of Pax Christi International, took the microphone during the service and spoke eloquently of the abuse her son had suffered at the hands of a Catholic priest. She called for a  "new reformation" that was more faithful to the Gospel, as well as the radical inclusion of women and the rethinking of seminary and formation programs.

As the protest was winding down and protesters gathered their signs to move on, Dennis chatted with two other women, one Catholic and one not who said she was there to support her Catholic friend.

"We need complete transparency and atonement to victims, or the church will never be able to move forward," Dennis said, noting that the church's failure to police abuse in its own house has given license to other powerful institutions and people to abuse their power.

Sandy Greene, the non-Catholic who is married to an atheist, said, "These people need to be shamed into changing their behavior," adding that the scandal "does not bode well for atheists and agnostics" who already distrust the institutional church.

The group has tentative plans to conduct future vigils and protests in parishes in Arlington, Virginia, and in Maryland, said Cooke.

Dennis sounded cautiously optimistic about the prospect of instituting reform in the church, but only if the laity take the lead and refuse to back down.

"My real hope is in the church that is the people of God saying no," she said. "I believe in that power and think we can change things. But it's going to take a real conversion to the Gospel that we have not seen yet."