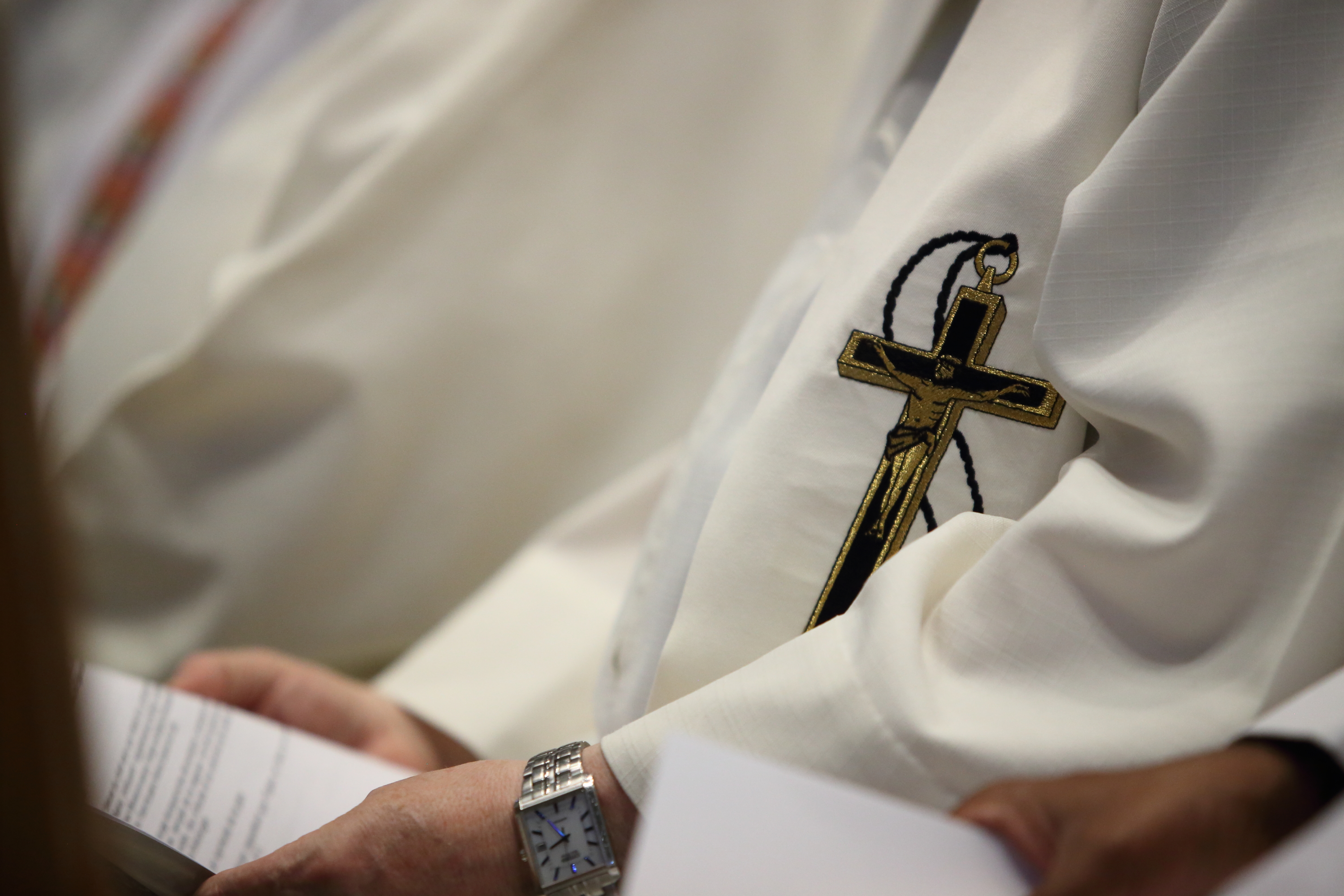 A cross is seen on the stole of an Oblate priest during Mass in late July at Notre-Dame-du-Cap Basilica in Quebec. (CNS/Presence/Philippe Vaillancourt)

In a statement issued a few minutes after the broadcast of a story from Radio-Canada investigating sexual abuse allegedly committed by 10 Oblate missionaries in First Nation communities, the Quebec Assembly of Catholic Bishops told of their "indignation and shame" for the "terrible tragedy of sexual and physical abuse of minors by members of the clergy or religious communities."

"The most sincere wish of all the bishops is that truth be done and justice done to all the victims," the statement said. "The church in Quebec, for the sake of truth, justice and healing, wants to be involved in denouncing abusers, working with the police and the courts and caring for the victims."

The story by Radio-Canada, the French equivalent of the Canadian Broadcasting Corp., aired Oct. 18. It brought to light the testimonies of Innu and Atikamekw people who said they were sexually assaulted during their childhood by members of the Oblates. Several victims told journalist Anne Panasuk that they complained, in vain, to religious authorities.

The Quebec bishops did not comment on the allegations made in the report, as "the courts have not yet completed their work on these cases."

The statement came just two weeks after the Canadian Conference of Catholic Bishops published its new guide on the implementation of measures to protect minors and prevent sexual abuse in the church.

The CCCB's document, Protection of Minors from Sexual Abuse: Calling Canadian Catholic Faithful for Healing, Reconciliation and Transformation, provides a series of guidelines to help bishops and major superiors enact protocols "to prevent the sexual abuse of minors by clergy and to respond to complaints."

On Oct. 22, the Oblates issued a statement saying they feel "devastated" by the "troubling testimonies."

"The congregation wishes to reiterate to the alleged victims its firm intention to make every effort to respond to the allegations with compassion, while ensuring that the truth is done and that justice is done," they wrote. "The Oblate Missionaries of Mary Immaculate unequivocally condemn all sexual and physical abuse, past or present, by the members of their congregation. We have a zero-tolerance policy in this regard."

In November 2017, during the National Inquiry Into Missing and Murdered Indigenous Women, Innu women from the Basse-Cote-Nord region in Quebec came forth to tell about the abuse they had allegedly endured at the hands of Oblate Fr. Alexis Joveneau.

In March 2018, a class action suit was introduced against the Oblates. On Sept. 14, the Oblates and the alleged victims tried to settle.

"Since the allegations presented last week are among those covered by the class action, as the courts have not yet addressed these claims and the parties are in negotiation, the Missionary Oblates of Mary Immaculate will not issue other comments," the statement said.