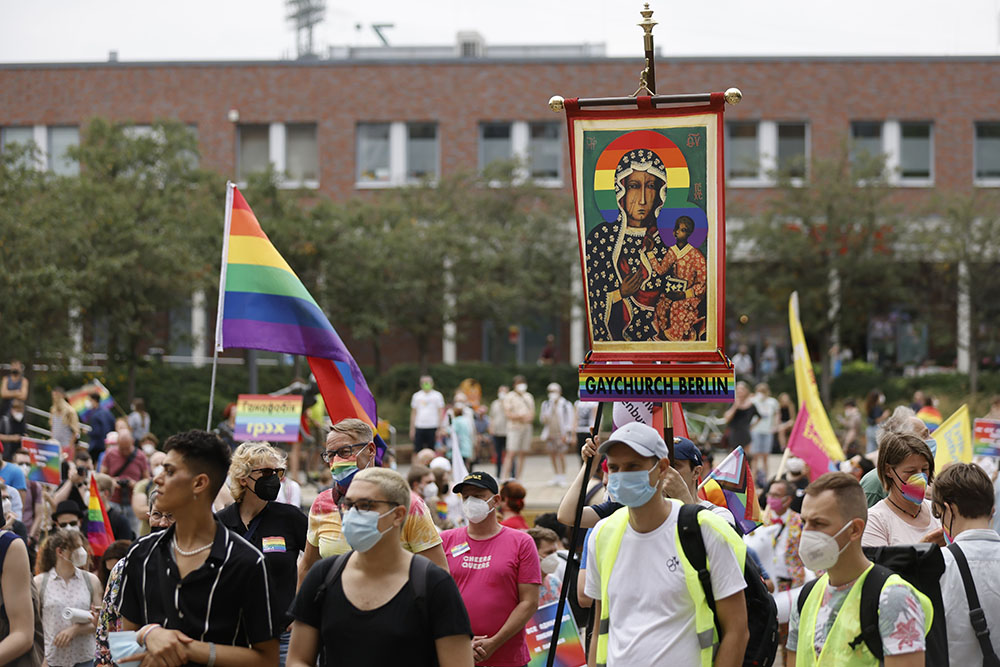 Activists carrying a rainbow flag and a banner with an image of Mary and the Christ Child attend the second "Marzahn Pride" march in Berlin July 17. (CNS/Reuters/Axel Schmidt)

Archbishop Heiner Koch said he would appoint a pastoral minister as a contact person for gays, the Berlin Archdiocese announced.

The German Catholic news agency KNA reported Koch made the pledge when he met with representatives of the Lesbian and Gay Association of Berlin-Brandenburg, with the archbishop saying this was important so that the marginalization and discrimination of the LBGTQ community could be addressed in the church without fear.

Koch said he regarded the double marginalization of Catholic gays — within the Catholic community as well as in the LGBTQ community — as "problematic and painful."

The reason behind the discussion, which the Lesbian and Gay Association had requested, was to look at the contradictions within the Catholic Church and the simultaneous solidarity shown toward LGBTQ people in the wake of the Vatican's renewed rejection last March of any church blessing for homosexual couples, KNA reported.

Ulrich Kessler, a member of the board of the Lesbian and Gay Association of Berlin-Brandenburg, said he had been surprised and thrilled "that the rainbow flags were also waving from Catholic Church spires, decorated internet pages and posts in the social media and that many church congregations had called out for blessing services."

Koch asked for understanding that, as bishop, "for the sake of the unity of the church, I cannot disregard such a position from Rome." At the same time, he said he was committed "without reservation to award God's blessing to the love and relationship of people."

He pledged that he would continue the discussion, including within the framework of the Synodal Path reform project of the Catholic Church in Germany.

But he said he regarded it as problematic "when church political pressure should be exerted by means of blessing services."

This remark was seen as a reference to an action last May dubbed "Love Wins," when blessing services were held in many Catholic churches around Germany for same-sex and divorced couples in a protest against the Vatican.