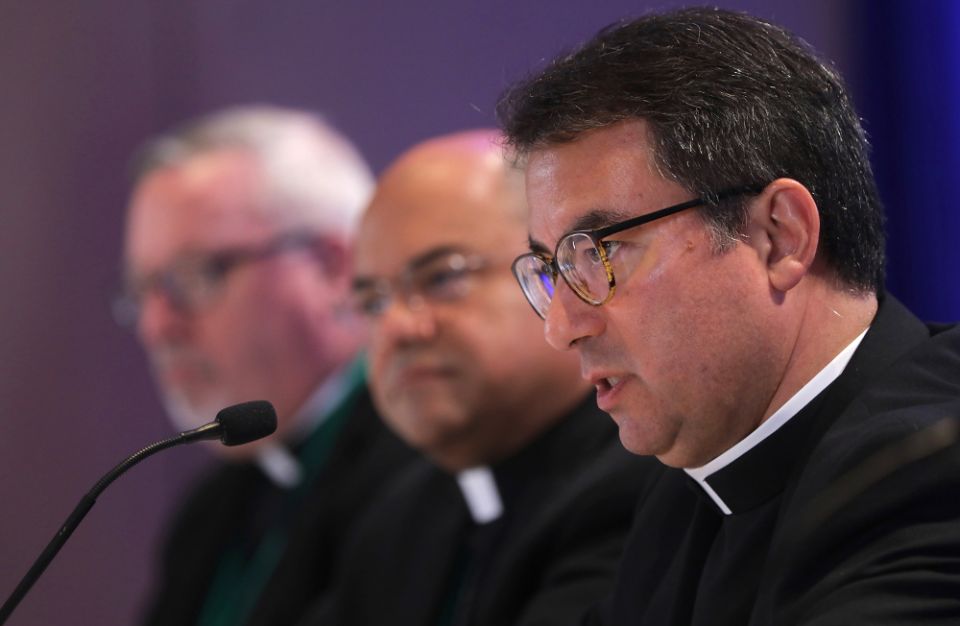 Bishop Oscar Cantú, coadjutor bishop of San Jose, Calif., right, speaks during a news conference at the fall general assembly of the U.S. Conference of Catholic Bishops in Baltimore Nov. 14, 2018. Pope Francis announced May 1 that Cantú has assumed pastoral governance of the diocese with the resignation of Bishop Patrick McGrath. (CNS/Bob Roller)

The appointment was announced May 1 in Washington by Archbishop Christophe Pierre, apostolic nuncio to the United States.

Cantú previously headed the Diocese of Las Cruces, New Mexico. He is the former chairman of the U.S. Conference of Catholic Bishops' Committee on International Justice and Peace. He currently is a member of the bishops' Subcommittee on the Church in Latin America and the Subcommittee on Hispanic Affairs.

He was one of two delegates chosen by the bishops to represent the conference during Pope Francis' visit to Mexico in 2016.

Before he was named to head the Las Cruces Diocese, he was an auxiliary bishop of San Antonio for five years.

He was born in Houston Dec. 5, 1966, the son of Ramiro and Maria de Jesus Cantú, natives of small towns near Monterrey, Mexico. He is the fifth of eight children — five boys and three girls.

He spent his priestly career working in parishes throughout the Houston metropolitan area. His first assignment was as parochial vicar at St. Christopher Parish. He also taught at the University of St. Thomas and at St. Mary's Seminary. He served as pastor at Holy Name Parish.

He was involved in the Christian Family movement; conducted retreats and worked with the Engaged Encounter ministry. Cantú also was also involved in The Metropolitan Organization, or TMO, which addresses social issues in the community.

A coadjutor automatically becomes the head of the diocese upon the death or retirement of its bishop.

McGrath, a native of Ireland, was an auxiliary bishop of San Francisco from 1989 until 1998, when he was named coadjutor of San Jose. He became the head of the diocese after Bishop R. Pierre DuMaine retired. DuMaine was the first bishop of the San Jose Diocese, which was created in 1981.