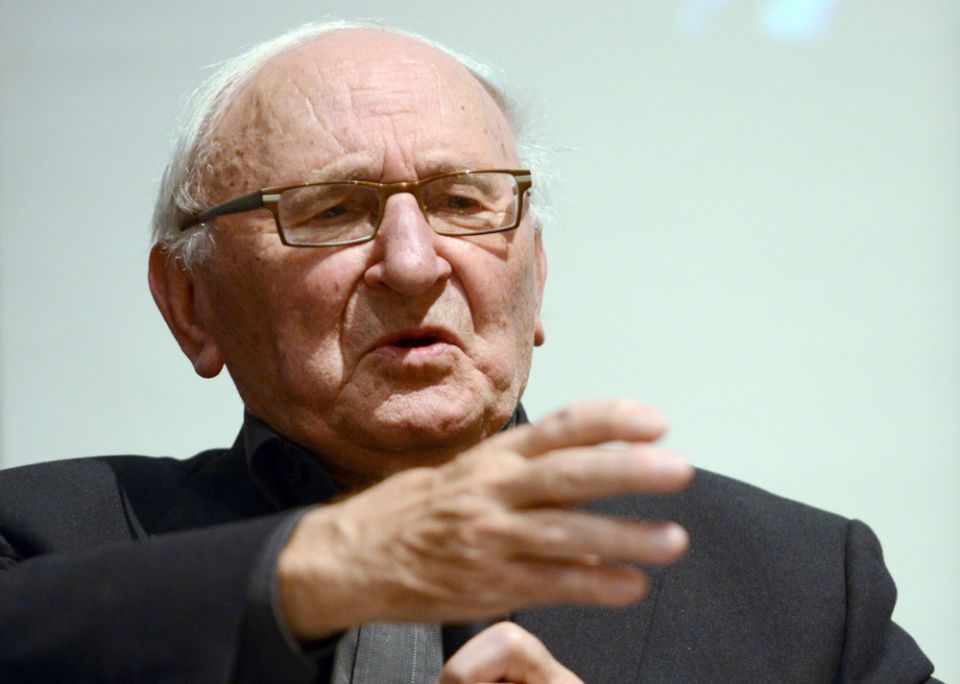 German-speaking Catholics have paid tribute to Fr. Johann Baptist Metz, a theologian who died in Munster at age 91. He is pictured in an October 12, 2012, photo. (CNS/KNA/Harald Oppitz)

"He was one of the great fundamental theologians of the post-council period, with keen sensitivity for the signs of the times," said Schonstatt Fr. Joachim Schmiedl, chairman of Germany's assembly of Catholic theology faculties. "He launched a whole epoch of theologians and ecclesiastical leaders."

He said he believed Metz's ideas could be found in teachings of Pope Francis.

"A keen eye for the suffering and disadvantaged, an awareness of the world's margins, and social commitment by Christians in the face of contemporary needs of the time -- these were all crucial for Metz," said Schmiedl.

Archbishop Ludwig Schick of Bamberg, chairman of the German bishops' World Church Commission, called Metz one of his country's "most important theologians."

"He was committed to a theology of compassion -- God's compassion for the well-being and salvation of mankind, which he turned into a central concept of contemporary theology," the archbishop said in a statement on his archdiocesan website.

"From this, he gave important impulses to a new theology of the world. Out of God's compassion for mankind, he drew a compassion from Christians and the whole church for every human being and the work of creation."

Born in Auerbach, Germany, in 1928, Johann Baptist Metz was captured by U.S. troops while in the Germany army in World War II. He was held at POW camps in Maryland and Virginia.

After studying theology and philosophy in Bamberg, Munich and Innsbruck, Austria, he was ordained priest in 1954, earning his doctorate under the supervision of Jesuit Fr. Karl Rahner.

During the 1962-65 Second Vatican Council, Metz served as adviser to Cardinal Franz Konig of Vienna. He helped start the theology review, Concilium, and was a leading member of an international association for Christian-Marxist dialogue.

Teaching fundamental theology at Munster University, 1963-1993, he developed a "Holocaust theology" and was refused a post in Munich by then-Archbishop Joseph Ratzinger. The priest was seeking to apply ideas from the left-wing Frankfurt school of Max Horkheimer and Theodor Adorno to his "new political theology."

Germany's Catholic news agency, KNA, said Dec. 3 "questions of suffering and justice" had affected Metz throughout his life, adding that he had been profoundly affected by experiences as a 16-year-old soldier during World War II. The agency said his rejection of "bourgeois Christianity" had been applied to liberation theology, adding that "hundreds of theologians" from Latin America and other parts of the world had sought him out in Munster and in Vienna, where he taught in retirement in the 1990s.

The director of Hanover's Research Institute for Philosophy, Jurgen Maneman, a former student of Metz, told KNA his teacher's political theology remained a "thorn in the side of German theology," because of its focus on "protest and movement."