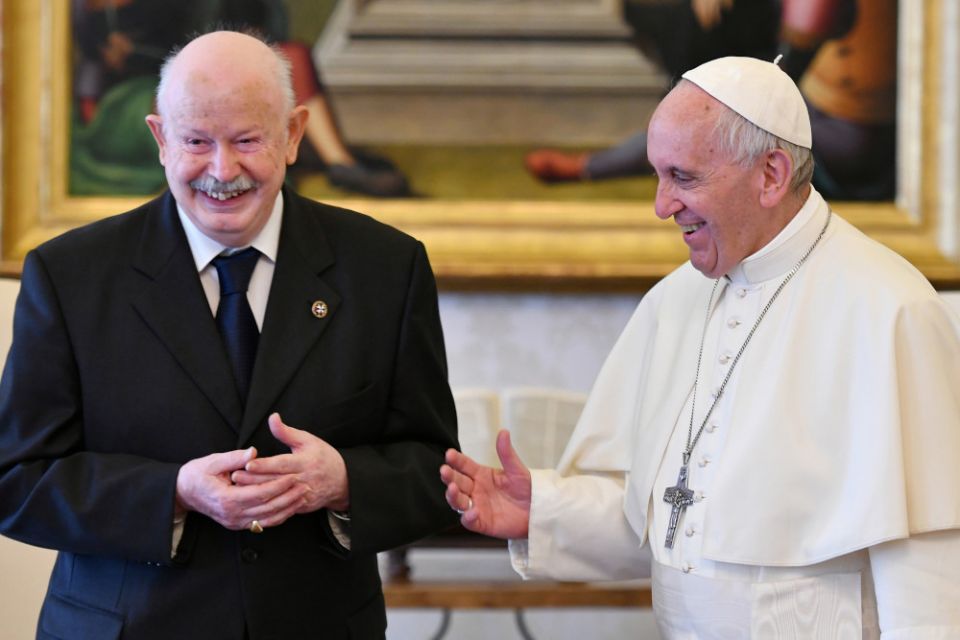 Fra' Giacomo Dalla Torre is seen smiling alongside Pope Francis in a 2017 file photo at the Vatican. Dalla Torre, who led the Knights of Malta following a tumultuous period in relations with the Vatican, died in Rome April 29, 2020, at the age of 75, the order announced. (CNS/Reuters/Alberto Pizzoli)

Vatican City — Fra' Giacomo Dalla Torre, who led the Knights of Malta following a tumultuous period of internal tensions and rocky relations with the Vatican, died at the age of 75, the order announced.

Dalla Torre, grand knight of the order, died in Rome April 29 after battling "an incurable disease diagnosed a few months ago," the Knights of Malta said in a statement.

Remembering him as "a man of great spirituality and human warmth," the order recalled his years of service to the city's most vulnerable, including serving meals to the poor sleeping outside Rome's Termini and Tiburtina train stations.

"A marked humanity and a profound dedication to charitable works have always inspired the 80th grand master of the Sovereign Order of Malta, who will be remembered by all who knew him for his human qualities and his cordial and affectionate manner," the Knights of Malta said.

Dalla Torre was born in Rome Dec. 9, 1944, and studied Christian archaeology and art history at the University of Rome. He taught classical Greek at Rome's Pontifical Urbanian University and served as the university's chief librarian and archivist.

He had been a member of the Knights of Malta since 1985 and made his solemn profession of vows in 1993.

Prior to his election as grand master in 2018, Dalla Torre served briefly as lieutenant with the task of leading the revision of the order's constitutions after months of turmoil and crisis.

In early 2017, Fra' Matthew Festing resigned as the order's grand master at the behest of Pope Francis, who had established a commission to investigate his removal of the order's grand chancellor, Albrecht Freiherr von Boeselager.

Although von Boeselager was reinstated as grand chancellor, his firing and the pope's intervention drew public attention to disputes within the order, which is known mainly for its massive programs around the world to provide medical care to the poor, humanitarian relief following disasters and assistance to migrants and refugees.

Citing their constitution, the order said that Fra' Ruy Gonzalo do Valle, assumed the role of interim head "until the election of the new grand master."

"The death of Fra' Giacomo Dalla Torre leaves an emptiness in all of us that is difficult to fill," Gonzalo do Valle said. "He was a good and spiritual man. As head of the Sovereign Order of Malta, he showed great diplomatic skills and an incomparable charisma. He was and will remain an inspiration to many members and volunteers."