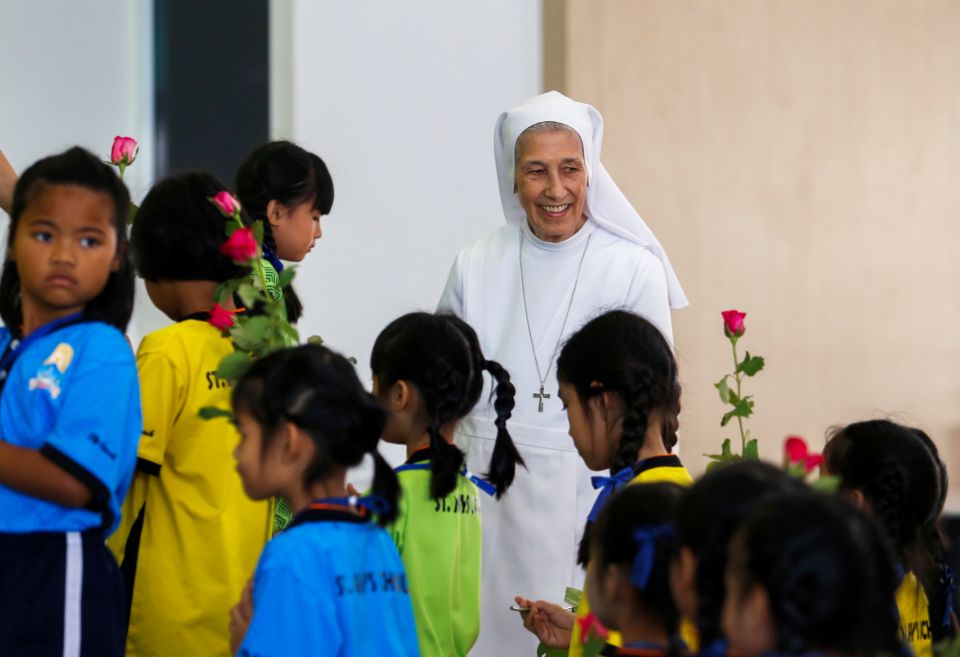 Salesian Sister Ana Rosa Sivori is seen with students at the St. Mary School in Udon Thani, Thailand, Sept. 24, 2019. She is Pope FrancisÕ second cousin and a missionary there and will translate for Pope Francis during his Nov. 20-23 visit, the Vatican press office announced. (CNS/Reuters/Jiraporn Kuhakan)

Vatican City — Pope Francis' translator in Thailand will be someone familiar with the nuances and colloquialisms of his Argentine Spanish because she grew up speaking it with him.

Salesian Sister Ana Rosa Sivori, the pope's second cousin and a missionary in Thailand for more than 50 years, will translate for Francis during his stay Nov. 20-23 in Thailand, said Matteo Bruni, director of the Vatican press office.

Briefing the press Nov. 15 about what to expect during the trip, Bruni also told reporters that Iwao Hakamada, an 83-year-old man who had spent 48 years on death row, had been invited by the Japanese bishops to attend the Mass Francis will celebrate Nov. 25 in Tokyo.

Hakamada, a former boxer, was convicted in 1968 on multiple counts of murder and was sentenced to be hanged. Numerous times courts declined to hear his appeals, but in 2014 a district court ordered his release while considering new DNA evidence. A new trial has not been held.

"The pope's position on the death penalty is clear," Bruni said. Francis in 2018 ordered an updating of the Catechism of the Catholic Church to assert "the death penalty is inadmissible because it is an attack on the inviolability and dignity of the person." He also committed the church to working toward abolition of capital punishment worldwide.

Bruni told reporters that Francis will speak Spanish in Japan Nov. 23-26. And he has an Argentine translator there, too: A Jesuit priest that Francis sent as a missionary to Japan when the pope was the Jesuit provincial of Argentina.

Sivori's grandfather and Pope Francis' grandfather were brothers. The Salesian told the news agency Reuters that although she has not seen her cousin since a 2018 trip to the Vatican, they regularly exchange letters and postcards.

"When we talk, we feel like brother and sister. For me, of course I know that he's the pope," she said, but "we talk simply.”

Sivori, vice principal of St. Mary's School in the northeastern province of Udon Thani, told Reuters she is proud of her cousin. But "when I meet him, I'll call him by his name, Jorge. Pope Francis just came after."

In a video message to the people of Thailand before the trip, Francis spoke in Spanish about his upcoming visit, emphasizing the multicultural and multireligious nature of the country where some 90% of the population is Buddhist.

"In this world that too frequently experiences discord, division and exclusion," Thailand's commitment to building a united nation that is respectful of the dignity of each person can inspire others around the world who are working to promote "solidarity, justice and peaceful coexistence."

"I trust that my visit will contribute to highlighting the importance of interreligious dialogue, mutual understanding and fraternal cooperation, especially in the service of the poor and needy and in the service of peace," he said. "At this moment we need to work so hard for peace."

Quick Reads | Pope's cousin, missionary in Thailand, will serve as his translator