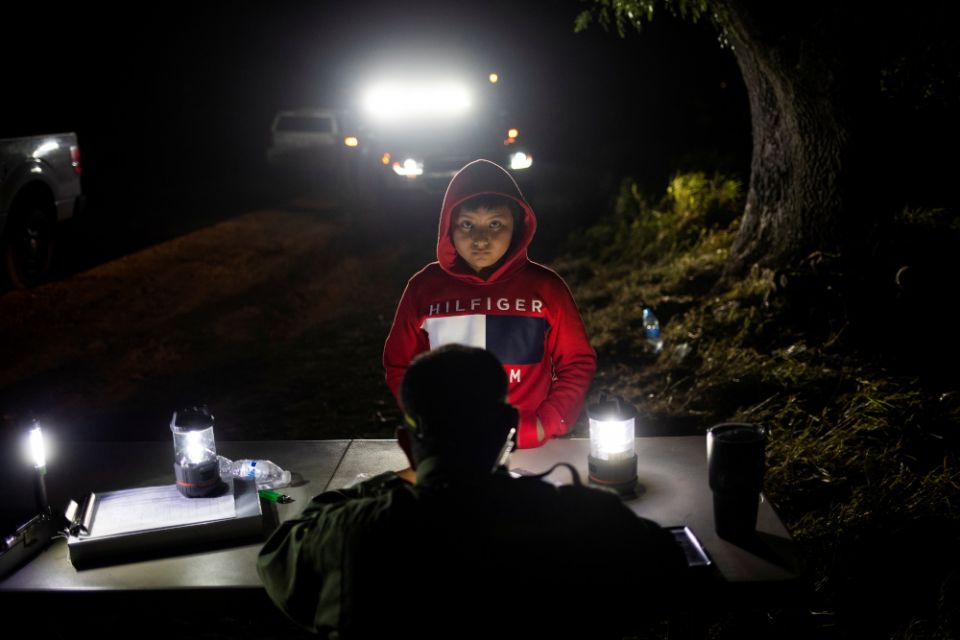 Juan, an 8-year-old unaccompanied minor from Guatemala who was traveling without any guardians, is registered by a Border Patrol agent in Los Ebanos, Texas, May 7, 2019. The U.S. Supreme Court ruled March 11 that President Donald Trump's "Remain in Mexico" policy for asylum-seekers can continue while suits against the protocols work their way through lower courts. (CNS photo/Reuters/Adrees Latif)

Washington — The U.S. Supreme Court in a brief written order March 11 granted the Trump administration's request to continue to enforce its "Remain in Mexico" policy while it appeals a lower court's ruling blocking enforcement to the high court.

The 2019 Migrant Protection Protocols, as the policy is formally known, require asylum-seekers to stay in Mexico while their cases make their way through U.S. immigration courts.

The court's order noted that Justice Sonia Sotomayor would have denied the administration's request.

"Remain in Mexico" was first implemented by the Department of Homeland Security at the border crossing in San Diego and it initially was limited to asylum-seekers from Guatemala, Honduras and El Salvador. The policy was expanded to crossings in Calexico, California, and four Texas cities: El Paso, Eagle Pass, Laredo and Brownsville. It also was expanded to include more people from Spanish-speaking countries such as Brazil.

The Trump administration appealed to the Supreme Court for relief from a Feb. 28 decision by a panel of the 9th U.S.

Circuit Court of Appeals in San Francisco that upheld a ruling by a District Court in California that blocked the government from enforcing the policy anywhere. The 9th Circuit upheld the decision but said it applied only to California and Arizona. The 9th Circuit's ruling was to have taken effect March 12.

In its ruling, the 9th Circuit said: "Plaintiffs presented evidence in the District Court that they, as well as others returned to Mexico under the MPP, face targeted discrimination, physical violence, sexual assault, overwhelmed and corrupt law enforcement, lack of food and shelter, and practical obstacles to participation in court proceedings in the United States."

In his filing with the Supreme Court, U.S. Solicitor General Noel Francisco said the District Court injunction and the 9th Circuit's decision "nullify an essential effort by the government to address the unprecedented number of migrants arriving at our Southwest border." He said that not being able to enforce the "Remain in Mexico" policy would put an "immediate and unmanageable strain" on the U.S. immigration system.