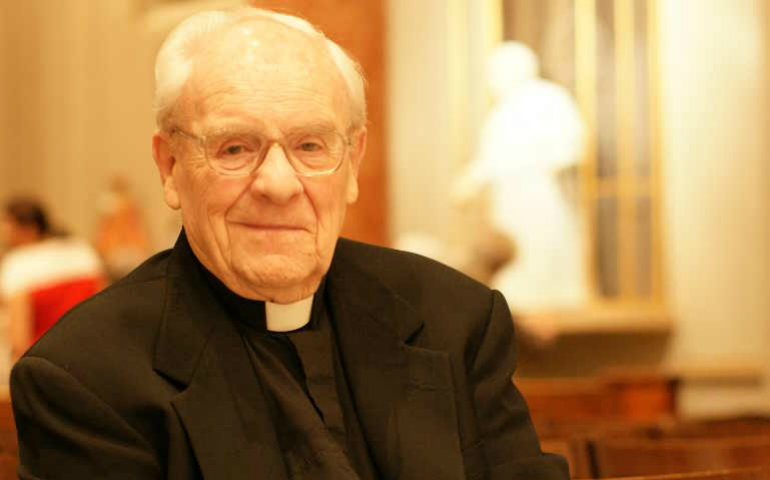 Retired Seattle Archbishop Raymond Hunthausen, a disarming spirit who rejected war and embraced the pastoral reforms of the Second Vatican Council, died July 22 at the age of 96. He was surrounded by family at his home in Helena, Montana.

In the early 1980s, with the Cold War at a high point, Hunthausen denounced the Trident nuclear submarine fleet harbored in his archdiocese, famously calling it "the Auschwitz of Puget Sound." His opposition inspired Catholics worldwide, but gained him powerful opponents in Washington.

His military opposition was based in Christian pacifism and had a distinctive moral lens: "Our security as people of faith lies not in demonic weapons, which threaten all life on Earth," he declared in a June 1981 speech at Pacific Lutheran University in Tacoma, Wash. "Our security is in a loving, caring God. We must dismantle our weapons of terror and place our reliance on God."

Catholic peace activist Jim Douglass, who introduced Hunthausen to pacifism, once described his longtime friend as "a holy prophet of nonviolence in the nuclear age." Douglass called Hunthausen a forerunner of Pope Francis — "a model of how a church leader can love, challenge and serve everyone on this Earth through the mercy and compassion of Jesus."

Raymond Gerhardt Hunthausen was born on Aug. 21, 1921, in the copper smelter town of Anaconda, Montana. Nicknamed "Dutch," he was the first of seven children born to Anthony and Edna (Tuchscherer) Hunthausen. He grew up helping with the Hunthausen grocery business and working in the Tuchscherer brewery.

In 1939, he brought his considerable athletic talents to Helena's Carroll College, graduating in 1943 with a degree in chemistry.

Sensing a vocation, he went to St. Edward Seminary in Kenmore, Washington. He was ordained in 1946 and his first assignment was to teach chemistry at Carroll. He earned an advanced degree in chemistry from the University of Notre Dame in 1952, and after years teaching and coaching various sports at Carroll and serving as the Helena diocese's vocation director for two years, he was named Carroll's president in 1957.

In 1962, Pope John XXIII appointed Msgr. Hunthausen bishop of Helena, just before the Second Vatican Council got underway in Rome. Hunthausen served as Helena’s bishop until 1975, when Pope Paul VI asked him to take the helm as archbishop of Seattle.

In 1991, five years before mandatory retirement, after a controversial period in Seattle where he became a lightning rod for church reform and opposition to U.S. military policies, and having had his authority curbed by the Vatican, he resigned to return to Montana. During his retirement, he led retreats while traveling about the Helena diocese to perform liturgies and pastoral acts.

In his early years in Seattle, he grew increasingly aware of the Trident nuclear submarine with its destructive payload. A U.S. naval base was harbored only a few miles from the Seattle chancery and Hunthausen felt he could not ignore its moral gravity — or the larger social and political realities.

At the time, he acknowledged being influenced by the peace witness of Jim and Shelley Douglass and other members of the Ground Zero Center for Nonviolent Action aside the Trident base. Hunthausen embraced war tax resistance, and then proceeded to redirect 50 percent (the amount going to the military) of his own taxes to a peace fund. 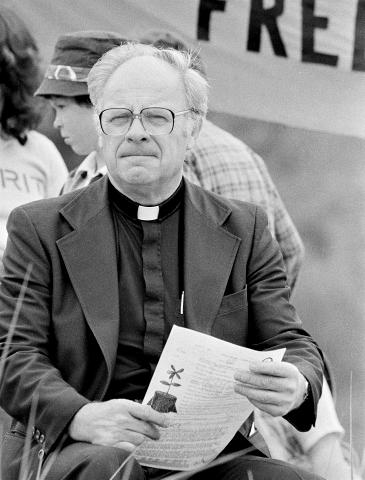 Archbishop Raymond Hunthausen sits among several thousand anti-nuclear protesters at a peace rally on the Kitsap Peninsula about 10 miles north of the Trident Navy Base at Bangor, Washington, Aug. 8, 1982. (AP Photo/Barry Sweet)

His stand against the morality of nuclear deterrence and his pastoral emphasis on church matters led to a sharp conservative Catholic backlash. That, in turn, led to a 1983 Vatican investigation that eventually concluded that Hunthausen had exercised "weak doctrinal leadership" in a number of areas, including too much accommodation to gay Catholics and to divorced and civilly remarried Catholics. The investigation also found Hunthausen had allowed children to receive the sacrament of Communion without first having received the sacrament of penance.

The Vatican in 1986, having found Hunthausen's leadership wanting, appointed a Pittsburgh priest, Fr. Donald Wuerl (the future cardinal of Washington, D.C.) as a Seattle auxiliary with special powers over liturgy and several other areas of jurisdiction.

From the start, the authority-sharing appointment did not go well. Turmoil surged.

The Seattle-Rome conflict caused Hunthausen intense pain and anxiety. Yet he made efforts to find a way to move forward for the sake of unity in the archdiocese.

At the November 1986 meeting of the National Conference of Catholic Bishops, he asked for help in resolving the impasse. He spoke of what he called the unworkable split-authority situation facing Seattle. What troubled him, as much as the secrecy and the lack of due process involved in the Wuerl appointment, was the divisiveness the whole affair had caused among the faithful in Seattle.

By May 1987, the irregular situation had become completely untenable and Wuerl was removed from his position and appointed bishop of Pittsburgh. Shortly after, the Vatican appointed Bishop Thomas Murphy of Great Falls, Montana, as coadjutor archbishop of Seattle.

Hunthausen eventually decided in 1991 that it would be best for him to retire, letting Murphy take full leadership. Some observers charged collusion during that time between disgruntled Washington and Vatican officials, both equally uncomfortable with the prelate and both wanting his episcopal platform diminished.

Pope John XXIII, viewed as a pastoral figure and the pope who called the Second Vatican Council, provided a model for Hunthausen in his early years of ministry. John's "open the windows wide to the world" call for Vatican II gave Hunthausen the fresh air to be the kind of bishop he was destined to be.

He would recollect years later how, since he had been appointed just before the council began, he had received his "on-the-job training" at the Second Vatican Council.

Indeed, Hunthausen was the last American bishop to have participated in all four sessions of that 1962-65 historic gathering of the world church.

Douglass has said this about a man of deep faith who had the humility to listen to everyone: "Archbishop Raymond Hunthausen spoke and acted as a prophet when he saw his country preparing instruments of war that could destroy humanity. He pastored the people of his diocese — and far beyond — with unconditional love. For his courageous faith in every direction, he was punished by the church he loved."

Once back home, in retirement, Hunthausen relished the outdoors. He was a golfer and a skier. He enjoyed hiking on Montana trails.

His nephew Dick Walsh has described his uncle's love of the outdoors: "We have so many experiences of Dutch on the ski hill, on the golf course and leading us on hikes when we were younger. I would say he loved nature and the beauty of the world we live in."

Walsh continued, "He knew the importance of beauty of nature and how it would inspire future generations that visited the campus of Carroll College. He once said that God seems a little closer at Carroll. His life illustrates his love of all the wonders that God created in nature. He would tell us God is with us everywhere but we all had a sense of closeness to God just being around Dutch." 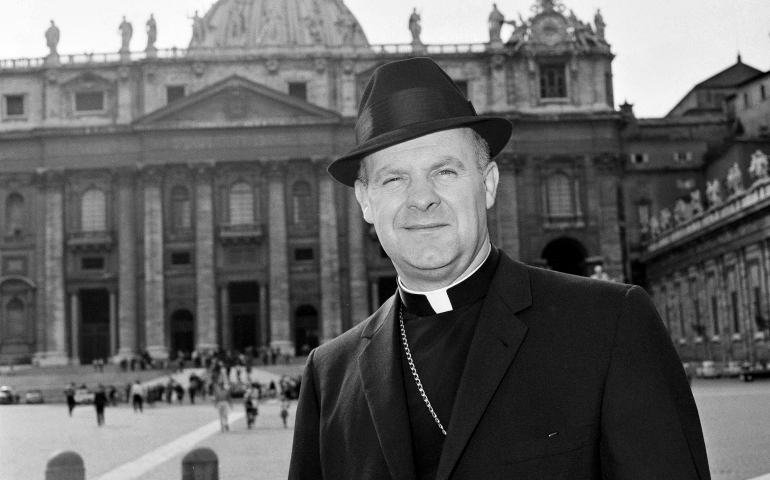 Read this next: Archbishop Hunthausen was a man of prayer, a man of God

Franciscan Sr. Fran Ferder worked in Seattle for many years and collaborated with Hunthausen in her ministry of TARA (Therapy and Renewal Associates). She tells a story that chimes with others spoken of Hunthausen:

I had been invited to give a day of reflection for the chancery staff for the archdiocese of Seattle. As I was being introduced to folks that morning as they arrived, the soft conversation and jovial mood was suddenly interrupted by a loud crash. We all turned to see folks rushing to the area of the noise. Someone had dropped a large pitcher of orange juice and it had splashed with abandon.

I watched as a dignified-looking man in a Kelly green sweater and running shoes immediately arrived with a mop and began assisting the cleanup. I supposed he might be the janitor. About 15 minutes later, the host of the event offered to introduce me to Archbishop Hunthausen before we started the program. To my complete surprise, he presented the man in the Kelly green sweater and running shoes — the same gentleman who had mopped up the spilled juice.

According to family members, Hunthausen made his peace with those who had led the Vatican's effort to clip his authority. His brother Tony, in East Helena, Montana, said Dutch never said much about the Seattle-Rome conflict. “He never opened up a conversation with a feeling of anger. He never said, 'Why is this happening to me?' ”

During the last years of his life, at daily Mass he would include in the prayers of the faithful a special prayer asking that Pope Emeritus Benedict XVI enjoy peace. It was Cardinal Joseph Ratzinger, before he became pope, who headed the Congregation for the Doctrine of the Faith when it opened the investigation of Hunthausen's allegedly wayward ways.

Bishop Thomas Gumbleton, retired auxiliary of Detroit and another episcopal witness of nonviolence, said of his fellow bishop:

He never wavered in his commitment to implement what he saw as Vatican Council directives. As a bishop, I have great admiration for this. He was committed to drawing the people of the diocese into the decision-making process. He was doing for the archdiocese of Seattle what we see Pope Francis is now doing for the whole church — devising ways for the voice of the people to be heard and to share in the decision-making process.

Ray also had a fantastic ability to interact with people of other faiths and denominations. He was far ahead of other dioceses in that regard. [He] is a role model and hero for me because of his integrity and total commitment to leading the church in its mission to transform our world into as close an image of the reign of God as possible. I am a better person and bishop because I knew him.

[Frank Fromherz retired this June from teaching courses in the sociology of religion, war, peace and social justice at Portland State University in Oregon. He is the author of the forthcoming A Disarming Spirit: The Life of Raymond "Dutch" Hunthausen from Marymount Institute Press.]

Editor's Note: A Disarming Spirit: The Life of Archbishop Raymond "Dutch" Hunthausen, a biography and social history of Archbishop Raymond Hunthausen by Frank Fromherz, will be published by the Marymount Institute Press  and Tsehai Publishers in the next few weeks. The manuscript of this authorized biography was completed more than three years ago but the author and publishers waited, at the request of the archbishop, to publish the book until after his death. To reserve an advance copy, please contact info@tsehaipublishers.com

A version of this story appeared in the Aug 10-23, 2018 print issue under the headline: Raymond Hunthausen, retired archbishop of Seattle, dies at age 96.