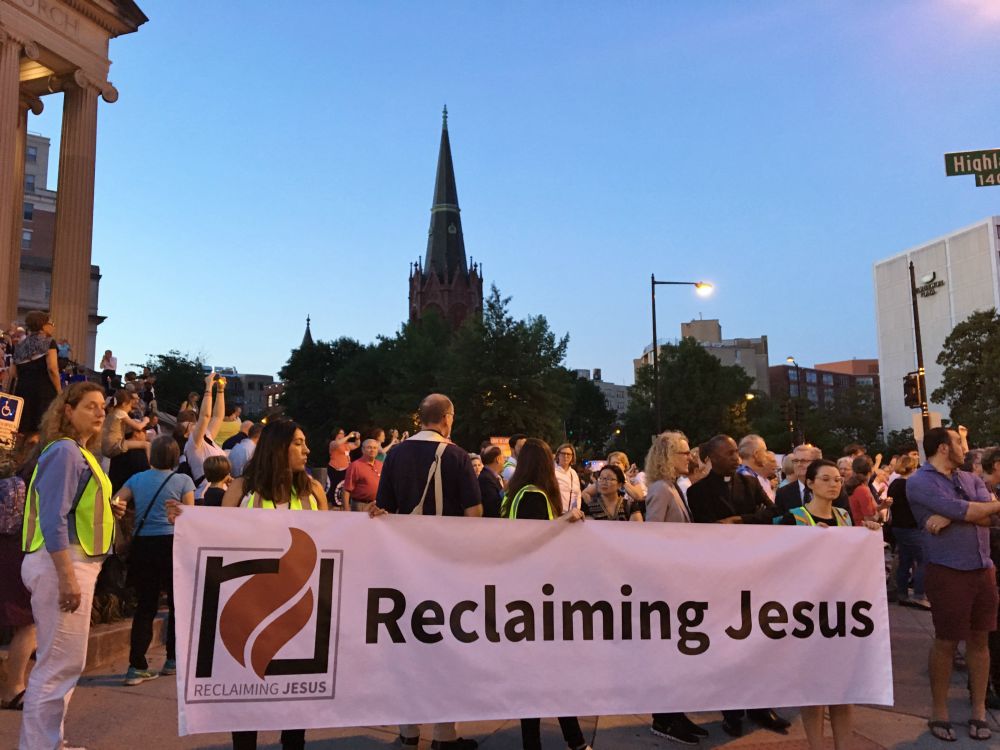 More than 1,000 people came to the National City Christian Church, seen in the background, to "reclaim Jesus" in Washington, D.C., May 24. (Julie Bourbon)

An ebullient church service on May 24 intended to "reclaim the integrity of faith during political and moral crisis" segued into a silent candlelight procession through the capital city's downtown streets before ending in prayer and song about 90 minutes later opposite the White House.

There, more than 1,000 people held up candles, simultaneously prayed aloud in multiple languages — a modern-day Pentecost — and listened to leaders of many faiths read the proclamations of "Reclaiming Jesus: A Confession of Faith in a Time of Crisis" just outside the building's wrought iron fence.

The church service that began the evening featured more than a dozen leaders from evangelical, mainline Protestant, Catholic, and African-American churches, including Franciscan Fr. Richard Rohr, founder of the Center for Action and Contemplation; Jim Wallis, president and founder of Sojourners; theologian Walter Brueggemann; and the Most Rev. Michael B. Curry, presiding bishop and primate of the Episcopal Church, among others.

The 23 faith leaders who signed the declaration met several times before this culminating event, beginning with a retreat on Ash Wednesday when they formulated a response to what they called the country's "growing political amorality."

The leaders wrote the declaration at Easter and released it this past week, at Pentecost, giving it a "liturgical arc, not political timing," Wallis told NCR prior to the service, as the religious leaders dined in a quiet room just steps away from the gathering crowd. 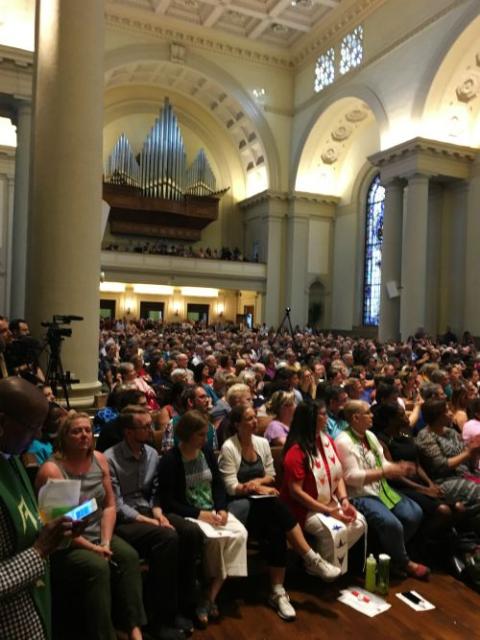 Rohr, dressed in casual clothes before donning his Franciscan robe to address the congregation, expressed the concerns that led him, at the urging of Wallis and Curry, to join the Reclaiming Jesus effort.

"We Catholics, we have such magnificent social teaching on paper," he said. "It's one of the least preached things from the pulpit in the ordinary parish, and I think the evidence is, although no one would knock it publicly, the bishops and preachers don't tend to really be invested in it."

Referencing the other faith leaders present, Rohr added, "These churches, representing so many denominations, have often told me that we have the most coherent argued position, and yet the corner church in town knows nothing about it. It's amazing there could be such a split between teaching and practice. But I think we're afraid of the division it will bring. No one likes to get hate letters on Monday morning after your Sunday sermon."

Once the time for the service arrived, Rohr and the other faith leaders filed into the church, to the sounds of gospel tunes sung by the Howard University Gospel Choir. Each speaker fired the assembly up more than the last.

Often a serious figure, Wallis joked from the pulpit that the favorite question he'd received before the event was "do we need to bring our own candles?" The answer was clearly no.

"The Gospel shines like a light in the darkness and the darkness has not overcome it," Wallis said. "It's a dark time, but we have enough candles for all of you."

Calling this a "Pentecostal moment," Curry, possibly best known to a global audience for his role in the recent British royal wedding, whipped the crowd into a fervor with calls to "love your neighbor, love the neighbor you like and the neighbor you don't like," he said, gesturing with animation and speaking with a rising cadence.

The rest was lost as the congregation rose to its feet and applauded wildly.

"The Gospel is still the Gospel, and there are people who still want to live it."

As Old Testament scholar Walter Brueggemann slowly climbed to the pulpit, the assembly and the elders on the alter rose again in ovation, causing him to tease that they were cutting into his time.

Brueggemann used his few minutes to talk about truth, Biblical truth and "the practice of lying that is invading political and civil life."

"The ninth commandment at Mt. Sinai is you shall not bear false witness," Brueggemann told the congregation. "But this is what Moses really said: Moses said you shall not invent fake worlds for your own convenience."

Sharon Watkins, director of the National Council of Churches, explicitly addressed in her remarks at the portions of the declaration having to do with misogyny and sexism, reminding the crowd that the first two evangelists at the tomb were women. 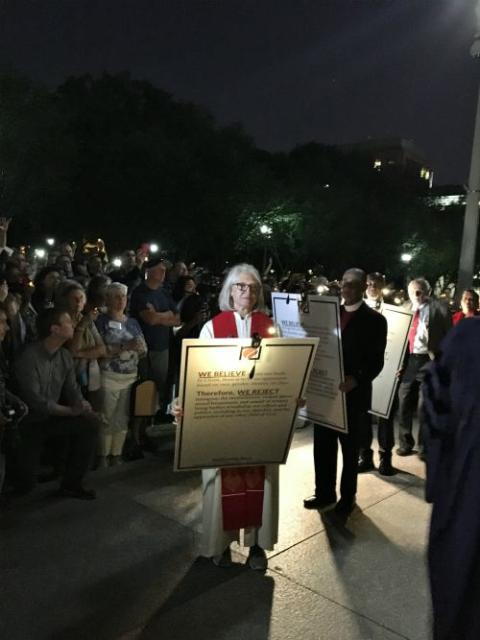 Sharon Watkins, director of the National Council of Churches, holds a sign with one of the six "Reclaiming Jesus" principles outside of the White House, May 24. (Julie Bourbon)

Watkins also called out support for the LGBT community, which some activists have accused the declaration of slighting by not referencing it specifically, and told women that they need not return to their abusers, a clear nod to recent accusations of sexism in the Southern Baptist Convention.

"Jesus is Lord, and we are one," she closed.

Once the service ended, the assembly filed out to fill the front steps of the massive National City Christian Church, spilling onto the sidewalks and street. Police accompanied the silent procession for the nearly mile-long walk to Lafayette Square, across Pennsylvania Avenue from the White House.

Pedestrians and al fresco diners on a pleasant late spring night watched the crowd go by, taking pictures, with some joining in and walking alongside. The church elders remained front and center, arms linked.

Once at their destination, there was more prayer before the elders began walking in a tight circle, a la a union picket line, each carrying a washboard-size poster of one of the declarations six principles. They read them aloud as the crowd pressed in close on all sides.

The assembly broke up at about 9:30 p.m., as the elders headed back to the church and the crowd drifted away. It is unclear what the next steps for the Reclaiming Jesus movement — if it is a movement — will be.

At the beginning of the evening when asked what results he hoped for, Rohr responded, "Have we owned what we're hoping for?"

Then he added, "I guess we're hoping to empower people to know the Gospel is still the Gospel, and there are people who still want to live it."

[Julie Bourbon is a NCR contributor based in Washington.] 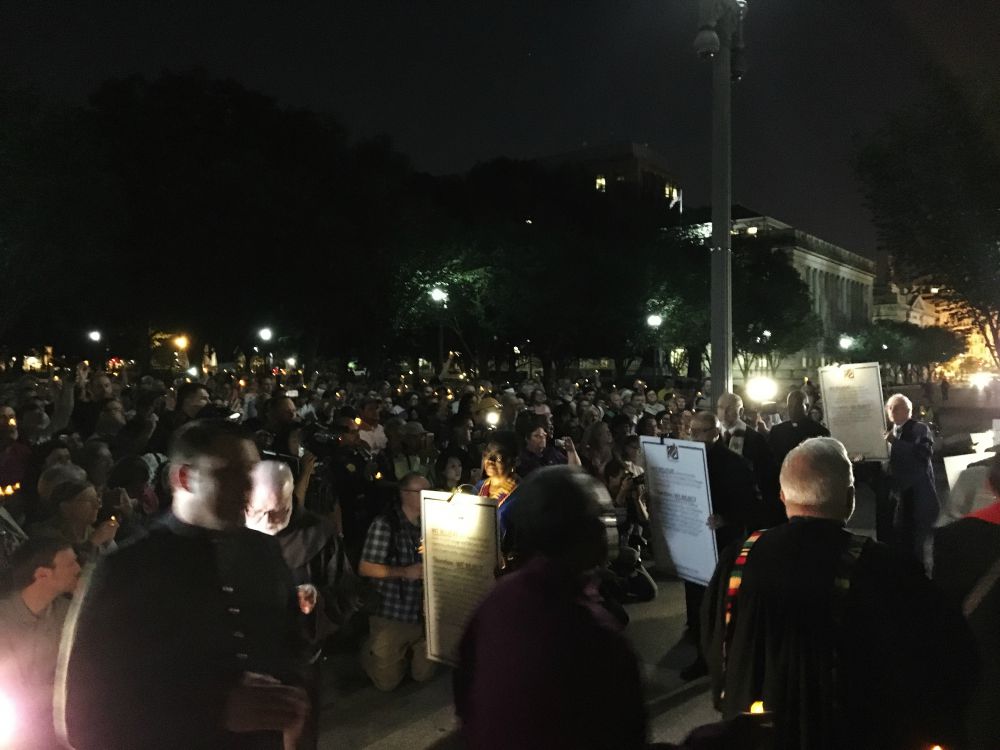 People assembled outside of the White House after the church service May 24. (Julie Bourbon)