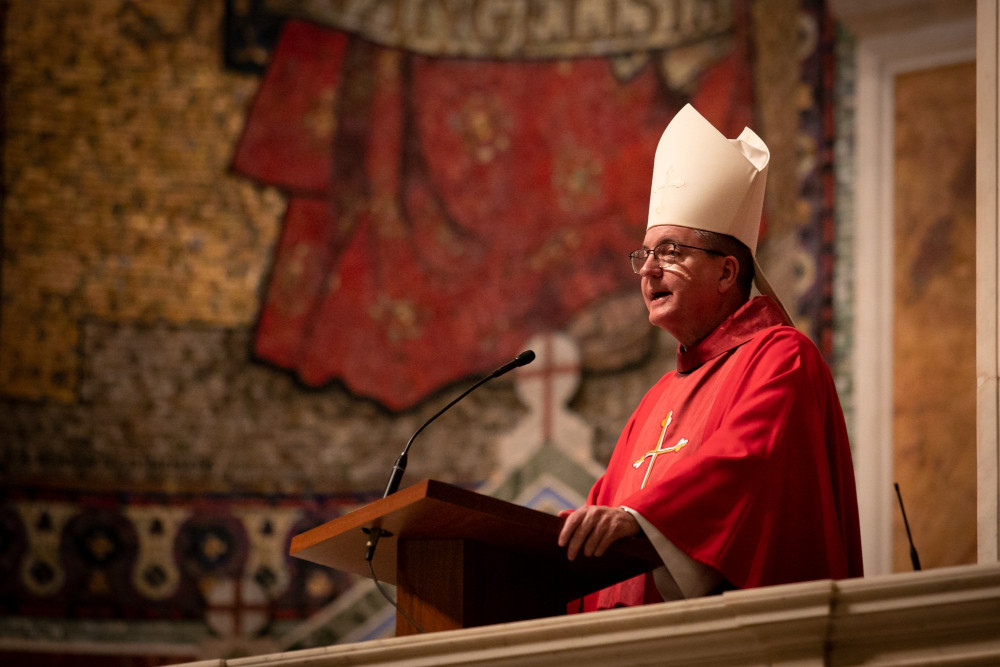 Just as people seek wise counsel in legal matters, so too should people prayerfully seek the guidance of the Holy Spirit, whom Jesus called the Counselor, said Bishop John O. Barres of Rockville Centre, New York.

He made the remarks in his homily at the 70th annual Red Mass Oct. 2 at the Cathedral of St. Matthew the Apostle in Washington.

The Mass seeks God's blessings on those involved in the administration of justice and those who work in public service.

Barres noted that attorneys are called counselors of the law out of respect for the advice they give based on their wisdom, understanding and knowledge.

"Jesus called the Holy Spirit the Counselor for similar, though far more significant reasons," Barres said. "The counsel of the Holy Spirit is not about intellectual property or agreements in restraint of trade.

"It's about how to make our very brief time on earth radiant with holiness and virtue, how to love God and our neighbor."

Washington Cardinal Wilton D. Gregory was the main celebrant of the Mass, which was attended by two Catholic members of the U.S. Supreme Court, Chief Justice of the United States John G. Roberts Jr. and Associate Justice Amy Coney Barrett, and retired Associate Justice Stephen G. Breyer, who is Jewish.

The bishops and priests wore red vestments, signifying the tongues of fire of the Holy Spirit at Pentecost. Some women in the congregation, including Barrett, wore red dresses at the Mass.

The John Carroll Society is named for Archbishop John Carroll, who in 1789 was named the bishop of Baltimore and became the first Catholic bishop of the United States, leading a diocese that then included all 13 original states.

With about 1,000 members from professional and business life in the metropolitan area, the John Carroll Society supports the archbishop of Washington through volunteer medical and legal networks and also sponsors spiritual, intellectual and social activities.

The annual Red Mass in Washington is held on the Sunday before the opening of the Supreme Court's new term. This year's Red Mass took place about three months after the court's Dobbs ruling that overturned Roe v. Wade, which in 1973 legalized abortion nationwide.

The Dobbs ruling returned the issue of abortion to the states. It was strongly praised by pro-life groups and heavily criticized by advocates of legal abortion.

But as has been the tradition at the annual Red Mass, neither abortion nor any other legal issues that the Supreme Court might rule on were directly addressed.

Barres in his homily encouraged people working in law to rely on prayer in their daily lives and to call on the Holy Spirit for guidance.

He noted that by God's grace, people receive the gifts of the Holy Spirit -- wisdom, understanding, knowledge, counsel, fortitude, piety and fear of the Lord.

The bishop pointed out how noted American historian David McCullough, who died this year, had highlighted the importance of wise counsel in his books that included biographies of John Adams and the Wright brothers.

"McCullough was constantly examining how critical wise counsel is to presidential leadership, entrepreneurial ingenuity, and the forging and development of the American character and spirit," Barres said.

Reflecting on the importance of prayer, the bishop quoted St. Alphonsus Liguori, a civil lawyer and doctor of the church, who described prayer as "conversing with God as a friend."

The homilist pointed out how the busyness and distractions of today's culture can spill over into one's prayer life, and he emphasized the importance of spending time in quiet prayer.

"It's about allowing the Holy Spirit to expand and refine our contemplative concentration," he said. "It's about adoring, praising and thanking the Father, Son and Holy Spirit in silence. We need to be still and listen."

Barres then compared the attention and detail made in preparing a legal brief or in researching and writing a legal opinion to discipline in prayer.

"A deeper discipline of the Holy Spirit in prayer animates and focuses dedication to civil law responsibilities and the care of our marriages and families and all we are called to serve, including the younger generations of lawyers, law clerks, interns and associates," he said.

The bishop pointed to the example of St. Thomas More, the chancellor of England and skilled jurist who was a martyr for religious liberty and conscience rights, and who said: "I die the king's good servant, but God's first."

St. Thomas More and other saints demonstrated the importance of focusing on the will of God and seeking eternal life rather than concentrating on transitory human factors and seeking worldly prestige, Barres said, adding: "They allow the splendor of Christ's truth to shine through them, to their own times, and to all of subsequent history."

Barres encouraged people including counselors of the law and judges in their daily prayer to call on the Holy Spirit for guidance, and he concluded his homily with the words, "Come, Holy Spirit!"

At the beginning of Mass, a color guard of six fourth-degree Knights of Columbus marched down the cathedral's center aisle, bearing U.S. and Vatican flags, and the congregation sang the national anthem.

Prayers at the Red Mass were offered for those who work in the legal professions and law enforcement, and government workers at the federal, state and local levels, that they might serve the public good and "the least among us."

Prayers also were offered for peace in Ukraine and for those impacted by Hurricane Fiona and Ian.

The Red Mass featured soaring music by St. Matthew's Schola Cantorum choir, accompanied by the cathedral's organist and a brass quintet. The Mass closed with the congregation singing "America the Beautiful."

The cathedral's namesake is the patron saint of government workers.