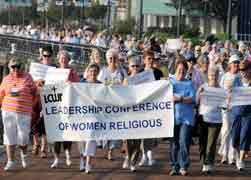 Members of the LCWR march through Woldenberg Riverside Park in New Orleans for a prayer service to preserve the wetlands, part of the LCWR's Aug. 11-14 gathering. (CNS/Frank J Methe)

The Leadership Conference of Women Religious has asked the Vatican to disclose why it is being investigated and who is funding the probe, and questioned why the sisters will not be allowed to see the final investigative report submitted to church leaders.

The Leadership Conference of Women Religious, which met last week (Aug. 11-14) in New Orleans, pledged to cooperate with a Vatican investigation of the sisters' fidelity to Catholic doctrine on female ordination, homosexuality, and the role of the church in salvation.

A separate Vatican investigation, announced last January, aims to take a broader look at nearly 350 communities of women religious in the U.S., examining everything from finances to how leaders deal with sisters who dissent from Catholic dogma.

In a statement released Aug. 17, the LCWR requested that "those conducting the inquiries alter some methods being employed."

"Among the expressed concerns are a lack of full disclosure about the motivation and funding sources for the studies," the LCWR statement said. "The leaders also object to the fact that their orders will not be permitted to see the investigative reports about them that are being submitted directly to the Vatican."

With about 1,500 members who are elected leaders of their religious orders, the LCWR represents about 95 percent of the estimated 59,000 Catholic sisters in the U.S.

"We are used to evaluations. We have no problems with evaluations," Sister Helen Garvey told National Catholic Reporter, an independent newspaper, in New Orleans. "But we need a sense of fair play. There needs to be transparency."

In the statement, the sisters said they are committed to "serving at and speaking from the margins of the Catholic Church."

American nuns are widely credited with building and for many years maintaining the Catholic school system and hospital network, both of which are among the largest private institutions in the world. But their numbers have dropped drastically over several decades as the vast majority of communities struggle to find new members, according to a study released last week.

In addition, some conservative Catholics complain that a number of sisters have publicly avowed progressive views that contradict church teachings.

Following is an excerpt from the press release the LCWR issued at the end of its annual assembly. The full text is available at the LCWR web site:

The assembly body also discussed the Vatican study, as well as a separate inquiry being conducted by the Vatican’s Congregation for the Doctrine of the Faith on the position of LCWR in matters pertaining to Catholic Church doctrine. Following analysis of the experience of these studies thus far, the leaders noted that while their orders have always been fully accountable to the church and plan to collaborate with the Vatican in these studies, they request that those conducting the inquiries alter some of the methods being employed. Among the expressed concerns are a lack of full disclosure about the motivation and funding sources for the studies. The leaders also object to the fact that their orders will not be permitted to see the investigative reports about them that are being submitted directly to the Vatican.

Throughout the assembly, the leaders emphasized that their orders have remained faithful to the reform and renewal of their communities called for by the Second Vatican Council that urged women and men religious to adapt their lives, prayer and work so they may most effectively fulfill their mission. They reclaimed their commitment to what they believe is the unique and needed role of religious life which includes serving at and speaking from the margins of the Catholic Church.

The leaders noted that this study of their lives has drawn national and international attention and provided them the opportunity to explain the substance and focus of religious life, not only to those conducting the probes, but also to the public. In a presentation on a recently conducted national study on vocations to religious life, Brother Paul Bednarczyk, CSC and Sister Mary Bendyna, RSM emphasized the need to increase public understanding of religious life. Bednarczyk, executive director of the National Religious Vocation Conference, and Bendyna, executive director of the Center for Applied Research for the Apostolate (CARA), addressed the assembly on the findings of the national study their two organizations conducted over the period of two years on vocations to religious life.

As LCWR outgoing president Sister J Lora Dambroski, OSF called the assembly to move forward together, she also pointed out the potential inherent in the Vatican studies. In her address to the assembly she called the inquiries a "unique invitation to ongoing creativity in the living of Gospel commitment" and said they provide "another defining moment in our conference and our collective histories and future."