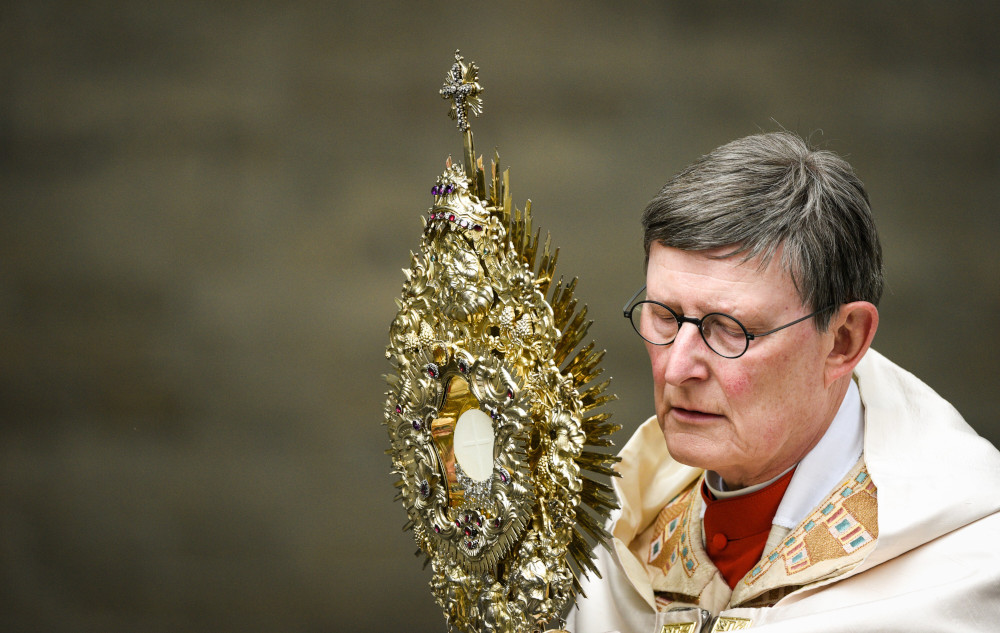 German Cardinal Rainer Maria Woelki of Cologne is pictured in a June 4, 2020, photo in Cologne. Woelki said he would resign from his office if the sexual abuse study he commissioned implicated him in any cover-ups, according to the Cologne Archdiocese. (CNS/KNA/Harald Oppitz)

Cologne Cardinal Rainer Maria Woelki would resign from his office if the sexual abuse study he commissioned implicated him in any cover-ups, according to the Cologne Archdiocese.

The German Catholic news agency KNA said the archdiocese was confirming a report in the local Kölner Stadt-Anzeiger newspaper that Woelki had expressed this intention before the diocesan pastoral council in November 2018. The aim of the study is to identify by name those who were involved in sexual abuse.

"This does not exempt Cardinal Woelki, and he would face up to his responsibility and accept the consequences," the archdiocese said.

In its report, Kölner Stadt-Anzeiger cited an unidentified pastoral council participant as saying that the cardinal "in his sometimes-loose manner" had explained that no consideration could be shown to anyone and that a "complete clarification" was necessary. If the study could prove his participation in a cover-up, then "the cathedral chapter will have to vote anew."

The archdiocese confirmed to KNA the content, but not the exact wording, of Woelki's reported remarks.

Between 2003 and 2011, Woelki was auxiliary bishop of Cologne and in this function was a member of the personnel department of the archdiocese. In the fall of 2018, as archbishop, he commissioned a Munich law firm with the task of compiling a report on how diocesan officials handled abuse cases.

To assure the independence of the investigation, Woelki himself as the contracting authority was not to be informed in advance of the study's conclusions. The presentation was to have been made March 12, 2020, but was called off at the last minute. The reason provided then was that the planned identification of current or former decision-makers still needed legal clarification.

Media reports say cover-up allegations so far have focused on, among others, the archdiocese's former personnel chief and vicar general, now-Archbishop Stefan Hesse of Hamburg. Hesse has denied the allegations and demanded that the study may only be published together with an explanation from his point of view. In addition, he noted that he had presented every case to Cardinal Joachim Meisner, the late archbishop of Cologne, and that everyone in the personnel conference had the chance to provide advice.

Responding to a KNA query, the Cologne Archdiocese stressed that auxiliary bishops bore no responsibility for personnel management, for pastoral personnel or for the handling or examining of suspected cases of sexual violence.