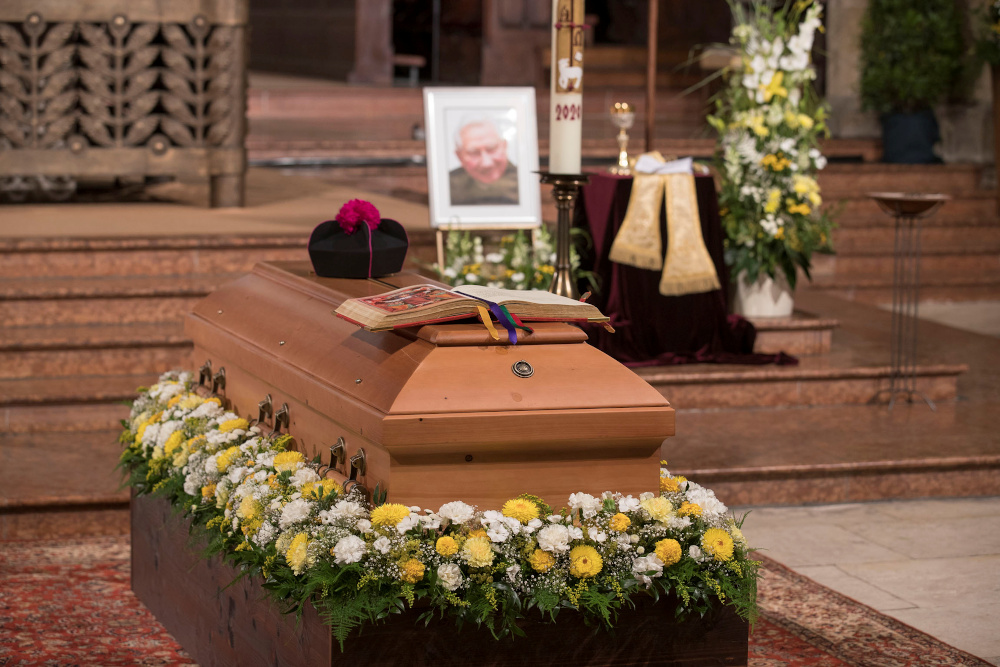 A photo is seen near the casket of Msgr. Georg Ratzinger, brother of retired Pope Benedict XVI, during his funeral Mass at the cathedral in Regensburg , Germany, July 8, 2020. (CNS/ Reuters/Uwe Moosburger, Bistum Regensburg)

Bishop Rudolf Voderholzer of Regensburg said Pope Benedict, 93, was connected to the Mass taking place for his older brother July 8 in the Regensburg Cathedral. Msgr. Georg Ratzinger died on July 1 at age 96.

During the Mass, the Regensburg bishop recalled the surprise June 18-22 visit Benedict paid to the sickbed of his dying brother.

"This sign of humanity touched many people. So all the more do we share in your mourning," he said in words addressed to the retired pope.

The Vatican newspaper and KNA reported that alongside Voderholzer at the altar was Benedict's private secretary, Archbishop Georg Ganswein, and the pope's ambassador to Germany, Archbishop Nikola Eterovic. Among other participants were the former Regensburg bishop, Cardinal Gerhard Muller, and Munich Cardinal Reinhard Marx.

The retired pope had written to his deceased brother a letter, which was read out loud at the ceremony by Ganswein.

Remembering his "dear brother, Georg," Benedict wrote, "May God reward you for everything you have done, have suffered and have given me."

The retired pope said his brother "received and understood his vocation to the priesthood as a musical vocation at the same time." He recalled his brother's "cheerfulness, his humor and his joy for the good gifts of creation." He also noted that his brother came to accept living with almost total blindness for 20 years.

Recalling his visit to Regensburg, the retired pope said he said "farewell" to his brother, knowing that "it would be a farewell from this world forever. But we also knew that God, who is good, who gave us this gift of being together in this world, also reigns in the other world, and there he will let us be reunited again."

Providing musical accompaniment for the funeral Mass were 16 former members of the "Domspatzen," the name of the Regensburg Cathedral's world-famous boys' choir that Msgr. Ratzinger directed from 1964 to 1994.

Voderholzer praised Msgr. Ratzinger's musical contribution and said it made clear how church music was not an "external ingredient" in a Christian church service. Music itself was " a medium of evangelization," he said.