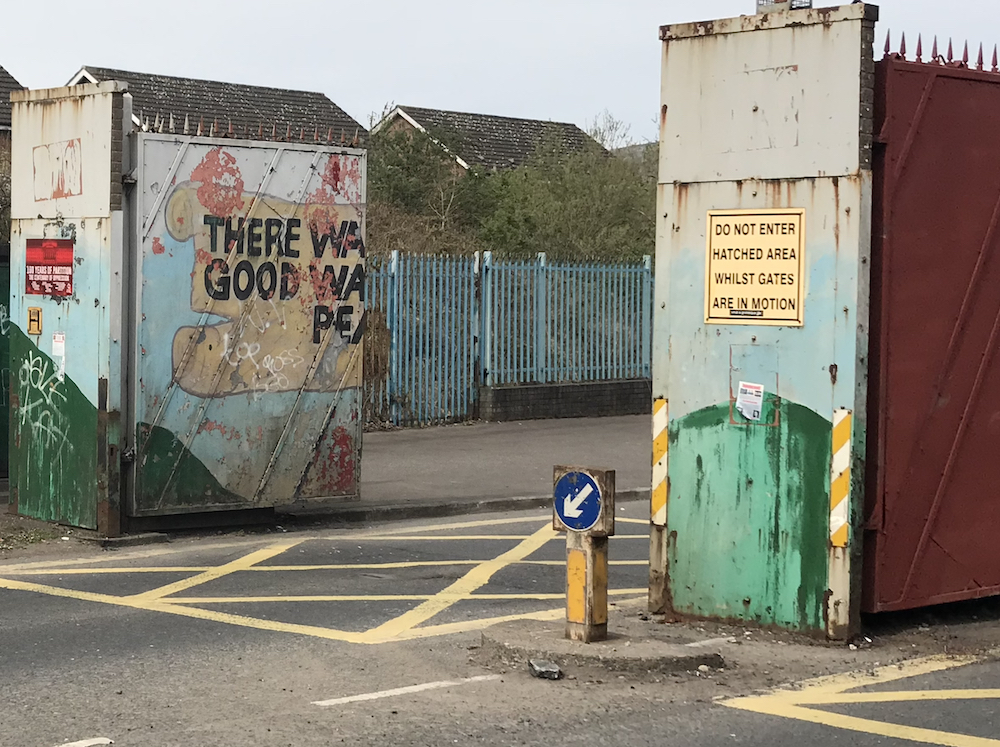 One of the Peace Walls in Belfast, Northern Ireland, was the focus of at least two nights of violence. (Claude Colart)

Slender teenage fingers wrapped around bricks and stones, selected for lobbing at youngsters living separate lives on the other side of the ironically named "Peace Wall."

The mainly nationalist Catholic community on one side of the wall teemed with kids in hoodies and ripped jeans — determined to exact retribution for the missile attack aimed their way the night before from youths on the other side in the mainly loyalist Protestant area.

Standing between them and their target, a group of burly, mainly former Irish Republican Army prisoners were determined to ensure that kids from their community don't "ruin their lives" through arrest and potential criminal records.

Robert McClenaghan knows what that can mean to a young life. He spent 12 years in jail for his actions against what he sees as the British occupation of Northern Ireland.

One recent night in late April, he and his comrades stopped the kids getting close to the metal gate in the wall. Known as an "interface," it opens to allow people to pass into each community and to mix but also closes to protect them from each other.

Blocked by the elders of their own community, the kids let off steam by hurling their arsenal of masonry and fireworks at police vehicles blocking another route. Despite the police firing water cannon for the first time in six years, the night went off relatively uneventfully. But what was a seventh straight day of sectarian violence by youngsters who were born into peace triggered a series of concerns.

Britain's withdrawal from the European Union in January, the consequent customs arrangement in the Irish Sea and the 100th anniversary of the partition of the island are ramping up tensions in the six counties that make up Northern Ireland.

Concerned at the impact on the fragile 23-year-old Good Friday Agreement peace deal, the Church Leaders Group of Ireland, including Archbishop Eamon Martin, the Catholic Archbishop of Armagh and Primate of All Ireland, urged unity from political leaders.

Irish President Michael D. Higgins called for increased integrated education in Northern Ireland and likened schooling children according to their religions to "abandoning them to parcels of hate and memory that others are manipulating."

Higgins' call amplifies the view of some parents and teachers that integrated education in Northern Ireland would help young Catholics and Protestant to forge relationships to cement the gains of the peace process.

Northern Ireland's educational system is largely made up of Catholic Maintained Schools, which have a religious curriculum designed by the church, and Controlled schools, which are state-run, but many of them were once connected to Protestant churches. (As across Europe, the term "college" in Northern Ireland refers to a secondary school).

Teaching Catholic and Protestant kids together began with the opening 40 years ago of Belfast's Lagan College. While only 7% of school children in Northern Ireland attend integrated schools today, Paul Collins sees it as a great achievement.

He is the campaign fundraiser for the independent charity, the Integrated Education Fund. It supports integrated schools and provides the Integrate My School app for parents to anonymously register their interest in transforming their children's schools.

"I grew up in Catholic education, and the idea of an integrated school was abhorrent to anyone who taught me, so the fact that they've grown from 28 pupils in a scout hall, to 25,000 pupils and 65 schools is incredible," Collins told NCR. 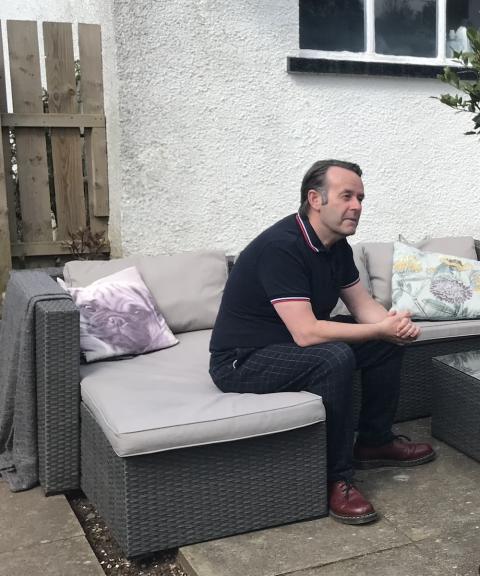 He sees it as bringing together people in a country where the "large majority" of citizens "have never had significant conversations with people from the opposite religion."

Schooled in Belfast during the height of the nearly 30-year "Troubles" in which 3,720 people died, Collins had family members jailed and knew people who were killed. He sent his own daughters Lily, 17, and Freya, 13, to integrated schools.

While they are not Catholic, his daughters joined the whole school community in marking their friends’ milestones of reconciliation, holy Communion and confirmation.

"The Integrated Movement is not in any way wishing to dilute the Catholic faith; if anything, we want to celebrate it and celebrate other faiths as well, be it the Protestant community, or Muslim," he said.

Collins is keen to stress that each of Northern Ireland's 65 integrated schools came from "parent power" and that none was established by the government or political parties.

"It begs the question, why is there not more?" he asks. "Why is government not taking heed of that? Why not a greater push to have schools become integrated?"

McClenaghan, who helped stop the two groups from fighting at the peace wall, is also a governor at a Belfast Irish language school. He warned against integrated education being viewed as a panacea. He would prefer to see more "sharing education," especially sports, to bridge the divide between schools on both sides of the wall.

The 2011 Census of the United Kingdom, of which Northern Ireland is a part, put the Catholic population there at 45%, just slightly lower than Protestants at 48%. The results of the 2021 Census, now underway, are expected, according to various analysts, to show Catholics in the majority.

Northern Ireland, which has about a 35% rural population, has 50,000 too many school places, says Collins. It seems no longer feasible to have more than one school in some country villages.

In recent years, the Catholic Church planned to close its 40-pupil Seaview Primary School in Glenarm, across the road from the Irish Sea. Parents applied for integration, worked to raise enrollment to 80, and saved the school.

In 2019, parents of the 40% Catholic, 40% Protestant and 20% "other" children — of another or no religion or from mixed Catholic-Protestant marriages — voted by post and the result favored integration.

Barry Corr, who is in his eighth year as Seaview Primary's principal, is positive about the move. He believes in the potential of children growing up to understand and respect each other's traditions.

The school will officially open as an integrated school on Sept. 1, the start of the new school year. 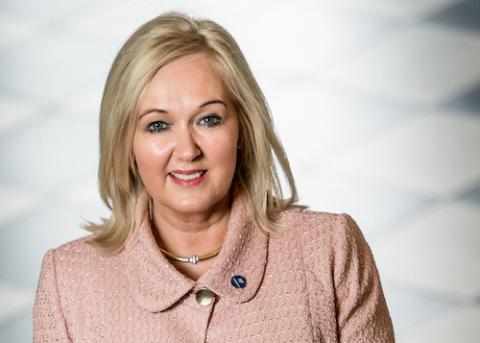 Kathleen O'Hare was principal of Hazelwood Integrated College in Belfast, Northern Ireland from 2012 until 2018, when she retired. (Courtesy of Kathleen O'Hare)

Fr. Dermot McKay, the parish priest of Church of the Immaculate Conception, next-door to Seaview, expects a "sort of a seamless transition" where the Catholic children will still attend Mass once a week and he will still prepare them for the sacraments.

For much of her 25 years teaching history at St. Cecilia's College, a Catholic school in Derry, Kathleen O'Hare was involved in cross-community work drawing together children from Catholic and Protestant schools. When she became principal in 2002, St. Cecilia's was named one of six pilot schools in a Shared Education Project.

Her move in 2012 to Hazelwood Integrated College in North Belfast was "a natural progression," she says, "because if you're doing that kind of work, you're working towards integration."

Despite its ethos of tolerance, integrated education is not without its obstacles. "Everyone assumes that children who come to an integrated school have all their issues sorted," O'Hare says. "But they're not; they come with all the same issues from the community."

Some of what she had to deal with as principal of the 2019 Nobel Peace Prize nominated school included graffiti reading "K.A.T.," an acronym for "Kill all Taigs," — a derogatory term for Catholics.

"Issues have to be tackled straight on," says O'Hare, who retired in 2018. "We got together, a group of us and the children, and sorted that out."

A particular frustration for O'Hare, who serves as the vice-chair of her local Cathedral Parish pastoral council, was that it was "impossible" to get the hierarchy of the Catholic Church to visit the school.

"Surely if you're a Catholic, there's an onus on you to work with people who are not Catholic, and take the example of Jesus?" she asked.

Without criticizing integrated schools, some Catholic bishops, such as Dromore Bishop John McAreavey, have emphasized that Catholic schools can contribute to healing in Northern Ireland.

Others have spoken more bluntly. Derry Bishop Donal McKeown told NCR that the notion that people would be "happy ever after" if they were put together in school is "childish."

"The best option I would put at the top of the list is for the politicians to cease to be sectarian," said McKeown, whose diocese straddles the border between Ireland and Northern Ireland. "If adults are spouting angry comments at one another, why on earth would 16-year-olds think anything else?"

But for Collins, it remains heartening to know that the children of people once on opposite sides of a bloody conflict are now sharing a classroom and creating friendships.

"It's intergenerational. The children mix in the classrooms, and then you have the parents coming to drop off the children," he says. "It's the parents, it's the siblings, it's also the grandparents."

Read this next: Living on a Belfast peace line