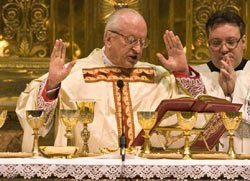 Cardinal Franc Rode celebrates Mass at the Jesuits' Church of the Gesu in Rome Jan. 7, 2008.

VATICAN CITY -- A top Vatican official said religious orders today are in a "crisis" caused in part by the adoption of a secularist mentality and the abandonment of traditional practices.

Cardinal Franc Rodé, prefect of the Congregation for Institutes of Consecrated Life and Societies of Apostolic Life, said the problems go deeper than the drastic drop in the numbers of religious men and women.

"The crisis experienced by certain religious communities, especially in Western Europe and North America, reflects the more profound crisis of European and American society. All this has dried up the sources that for centuries have nourished consecrated and missionary life in the church," Rodé said in a talk delivered Feb. 3 in Naples, Italy.

"The secularized culture has penetrated into the minds and hearts of some consecrated persons and some communities, where it is seen as an opening to modernity and a way of approaching the contemporary world," he said.

Rodé said the decline in the numbers of men and women religious became precipitous after the Second Vatican Council, which he described as a period "rich in experimentation but poor in robust and convincing mission."

Faced with an aging membership and fewer vocations, many religious orders have turned to "foreign vocations" in places like Africa, India and the Philippines, the cardinal said. He said the orders need to remember that quality of vocations is more important than quantity.

"It is easy, in situations of crisis, to turn to deceptive and damaging shortcuts, or attempt to lower the criteria and parameters for admission to consecrated life and the course of initial and permanent formation," he said.

In any case, he said, "big numbers are not indispensable" for religious orders to prove their validity. It's more important today, he said, that religious orders "overcome the egocentrism in which institutes are often closed, and open themselves to joint projects with other institutes, local churches and lay faithful."

Rodé, a 75-year-old Slovenian, is overseeing a Vatican-ordered apostolic visitation of institutes for women religious in the United States to find out why the numbers of their members have decreased during the past 40 years and to look at the quality of life in the communities.

He spoke Feb. 3 to a conference on religious life sponsored by the Archdiocese of Naples. The Vatican newspaper, L'Osservatore Romano, published the main portions of his text.

Rodé said it was undoubtedly more difficult today for all religious orders to find young people who are willing to break away from the superficial contemporary culture and show a capacity for commitment and sacrifice. Unless this is dealt with in formation programs, he said, religious orders will produce members who lack dedication and are likely to drift away.

The challenge, however, should not be seen strictly in negative terms, he said. The present moment, he said, can help religious orders better define themselves as "alternatives to the dominant culture, which is a culture of death, of violence and of abuse," and make it clear that their mission is to joyfully witness life and hope, in the example of Christ.