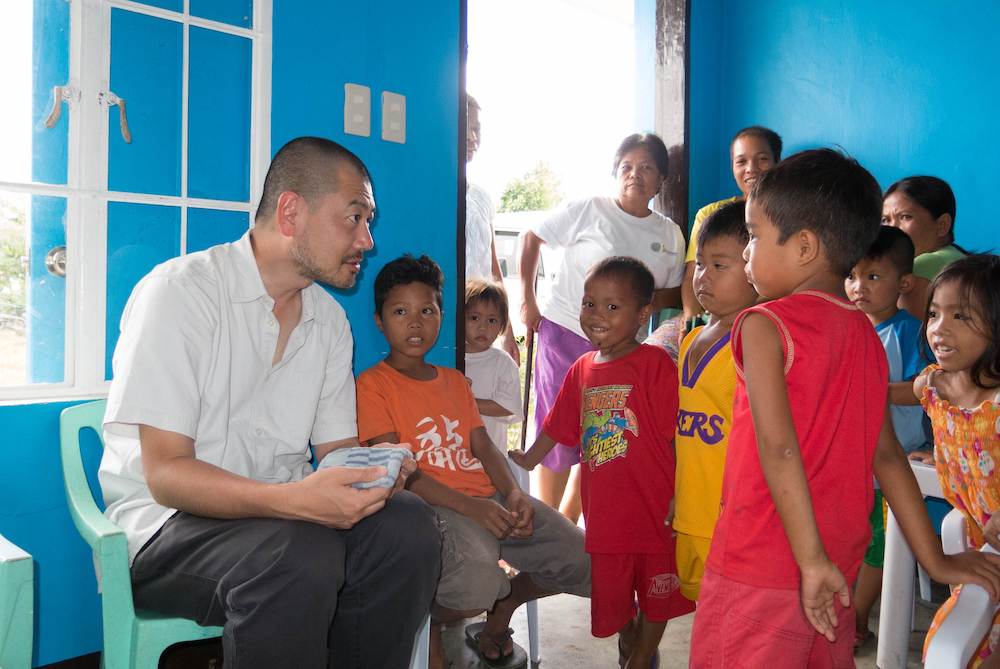 Fr. Daisuke Narui with schoolchildren during a visit to the Philippines in 2015 to visit areas affected by super typhoon Haiyan. (Provided photo/credit: Theresa Sacher).

Social justice promoters for the world's religious orders are praising Pope Francis' unusual appointment of one within their ranks as a diocesan bishop, saying the choice emphasizes the importance of their work and ministry.

Divine Word Missionary Fr. Paul Daisuke Narui, who has been serving in Rome since 2015 as his order's coordinator for peace and justice issues, will return to Japan later this month as the new head of the diocese of Niigata, about 200 miles northwest of Tokyo.

Narui — 46 years old and previously the coordinator of the Japanese church's relief efforts after the 2011 Fukushima Daiichi nuclear disaster —is one of dozens of such coordinators for the diverse range of congregations in Rome.

His colleagues describe a priest who is dedicated to social justice issues, a good collaborator and especially attentive to raising women's voices.

"Pope Francis is looking for people that will support his agenda, his mission, his message. You would find that for sure in Daisuke," said Sr. Sheila Kinsey, the executive co-secretary of the joint Justice, Peace & Integrity of Creation commission of the two Rome-based umbrella groups of the world's men and women religious.

Kinsey, a member of the Franciscan Sisters, Daughters of the Sacred Hearts of Jesus and Mary who has worked closely with Narui for about five years, said the new bishop "is steadfast and committed to the same things that Pope Francis is."

"They are very, very fortunate to have him," Kinsey said about Narui's new diocese.

Mercedarian Sr. Filo Hirota, who worked with Narui on justice issues while serving as the head of her order in Rome from 2012 to 2018, said he is someone who is "always available, ready to help and serve, simple, smiling and at ease."

"He listens and learns from women," said Hirota, who now lives in Tokyo. "It is great to have a bishop who knows and lives what equal discipleship of Jesus is."

Narui told NCR his appointment as a bishop came as a "total surprise." He said that since being ordained a priest in 2001 he has primarily worked on social justice issues or as a formator for his order, and does not have extensive experience as a pastor.

"I have limited experience in pastoral work," said the bishop-designate. "So I really have to collaborate, or ask other, more experienced people to help me. I try to have a shared responsibility working style."

Narui is originally from Japan's Aichi prefecture, about 290 miles south of Niigata, but spent his first three years as a priest as an assistant pastor for a parish in his new diocese. Niigata also borders Fukushima prefecture, the location of the 2011 nuclear disaster.

Serving then as the executive secretary of Caritas Japan, Narui headed up the national church's response to the disaster, coordinating relief efforts with other Caritas organizations across Asia.

"We received so much help from the diocese where I will be going," said Narui. "I met so many people — many people visited from this diocese to the affected place where I was working at that time. I feel connected to them."

Japan's Catholic community is small, with Vatican figures listing only 536,000 Catholics in the nation of 127 million. Niigata is estimated to have about 7,300 Catholics among a population of 4.6 million.

Narui said that during his time leading the tsunami relief effort he learned how well and easily Japanese Catholics can work with non-Catholics.

"It was a wonderful witness of Gospel values," said the bishop-designate. "Baptized or not, we can share the core values of the Gospel and work together for people who are experiencing difficulty."

"Collaboration is really important for me — not only by the bishop, or by the priest, but everybody, even non-Catholics," said Narui. "I think it is impossible to witness the Gospel, the good news in our world, without collaboration." 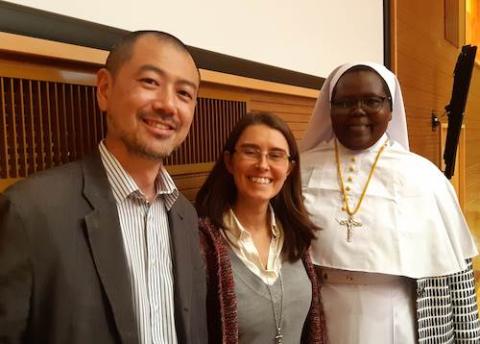 Corry also said that in her experience working with Narui in various organizations in Rome, "he is attentive and respectful and even where these groups included strong, articulate women Daisuke was greatly appreciated and respected."

"One of the skills that Daisuke will bring to his new role will be that of listening," she said. "In fact, he listens more than he speaks, but when he does speak, his contribution is always thoughtful, incisive, well-informed."

Narui said that as he goes back to Japan he will be thinking especially of one message of encouragement he received about his new role.

Members of his community in Rome, he said, go out into their neighborhood once a week to visit homeless people and to offer food or other assistance.

"They are friends," said Narui. "One of my friends, he congratulated me and he told me, 'Do not forget the poor.' "

"It was touching for me, because he said that not because he is homeless, not because he wanted to help other homeless people through me," said the priest. "But the way he said it was with dignity — because he agrees with this value, with the value of not forgetting the poor."

"It was a great encouragement for me," said Narui.

A version of this story appeared in the July 10-23, 2020 print issue under the headline: Member of Catholic peace community appointed bishop in Japan.